The cherry tree out on the edge of the vineyard is amazing this spring. It's really loaded down with bright red fruit, and nobody is picking any of it. Not the people who came and picked a lot of cherries last year. Not me. Not even the birds.

These are so-called "sour" cherries — cerises acides — that are best used in their cooked form. Pies, clafoutis, tarts, preserves, jam, sauces either sweet for dessert or sweet-and-sour to accompany duck or pork or turkey... those are perfect uses for them. 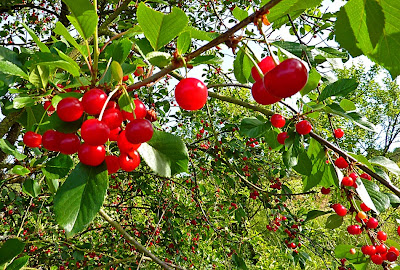 For some reason, I'm not into it this year. I really don't need to make more confiture. I still have many jars of plum jam down in the pantry, and it's my favorite. We're not eating duck right now. And I'm finding green vegetables — haricots verts, okra, collard and mustard greens, lettuces, spinach, grapevine leaves — more appetizing than sweet-and-sour sauces to go with meat. 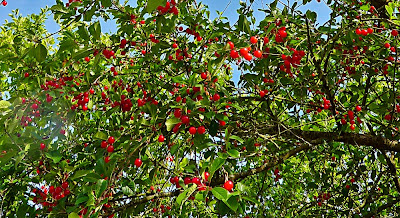 A friend did bring us a bag of sweet cherries that she picked in her yard, and Walt made a clafoutis and a couple of batches of cherry ice cream. All that was really good. The same friend gave us a jar of her home-made cherry sauce, which we really enjoyed over home-made vanilla ice cream. Another friend called to say her cherry trees were also really loaded down, and told us to come a pick some. We haven't taken her up on the offer. 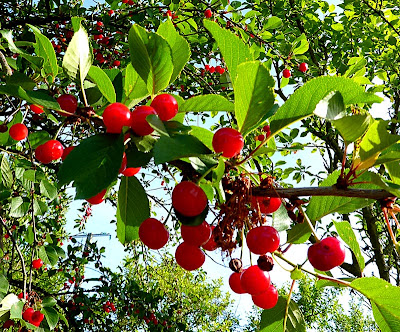 Maybe those really succulent, juicy, dark sweet cherries killed my taste for sour cherries this year. What I do want to try, though, is growing a sour cherry tree from the pits of cherries harvested on the nearby tree. And maybe if we had one growing right in our yard, I'd be more motivated.

I may still find myself out there picking sour cherries today or tomorrow morning. We'll see.

P.S. — Two hours later. We were out working in the garden when two people came to pick cherries. Their car is not registered in our département. I went out to talk to them and ask them if they own the land that the cherry tree is on, and which adjoins our property. They said their aunt owns the land, and said: « Elle est en Bretagne, la dame. » — "The lady who owns it is in Brittany."

I don't know if that means she lives in Brittany, or is just on vacation there. Anyway, I told them I'd really like to have that land cleaned off and tended to, because it has become a huge blackberry bramble. And the blackberry vines are starting to pull down our fence. They're already growing over into our yard all along that border. Keeping them cut back is a constant battle.

They said they'd talk to their aunt about it. I understand you can require your neighbors to keep their property in good condition. You have to get agreement from the mayor. I also asked the cherry-pickers if they thought their aunt would want to sell that piece of land. They said they'd mention it to her. Maybe that's a first step. We've thought about the possibility of buying it for years.
Posted by ckb at 07:05