Not good weather for travel

Here in Saint-Aignan:
It's probably not a good time to be traveling in Touraine — or anywhere in the northern parts of France. Paris has snow on the ground, and that's pretty unusual. Several subway lines are on strike, and ticket agents in some train stations are on strike too. The autoroutes are iced over and the cars are moving along like lines of escargots, both in and all around Paris. 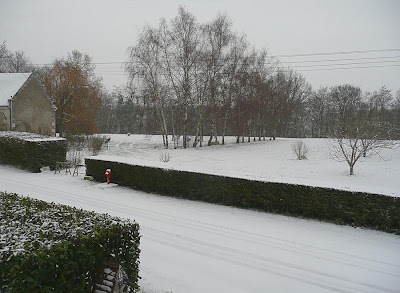 Scene out the kitchen window
The Télématin news just ran a report on the A10 autoroute that runs from Paris to Bordeaux, passing through La Touraine. A lot of cars skidded off the roadway yesterday near Tours, so southbound traffic was reduced to one lane. And then in the evening the autoroute was completely shut down for trucks to get out to sand and salt the road. Drivers were required to exit the autoroute at the toll both south of Tours and get onto local roads to continue their journey. It looked like a royal mess — la pagaille. 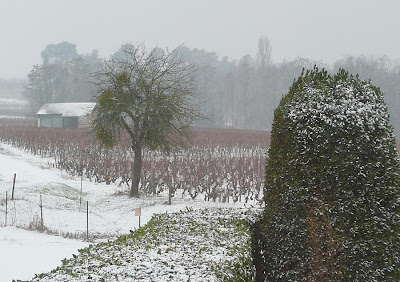 Looking out the back window over the vineyard
It's good to be able to stay in the house. I haven't taken many pictures because there just isn't enough light to make it worthwhile to go walking around outside. And it's too cold anyway (I'll take Callie out this afternoon). When the sun shines again — maybe tomorrow, I say, ever the optimist — I'll take the camera outdoors. For tomorrow, we are right on the western edge of the area that is supposed to get more snow. For Sunday, we are in the middle of it. 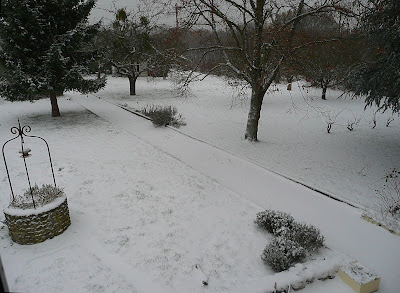 The back yard, looking out toward the vegetable garden
It will be interesting to see if the bread lady and her little white van make it up the hill today with our baguette. If not, tant pis, I guess. I got the impression yesterday that she wasn't going to be too eager even to try it. We have yesterday's baguette in the freezer, because Walt made pizzas for lunch. Today, it'll be steamy hot vegetable soup.
Posted by Ken Broadhurst at 07:58