We've been eating a lot of chicken wings lately. Until recently, I had never see them for sale in the markets or butcher shops here in Saint-Aignan. I figured you had to special-order them if you wanted just wings.

Over at the market in Noyers-sur-Cher one day, I noticed that the big poultry stand was selling chicken wings, but already cooked, to be eaten as finger food. I think they were labeled ailes de poulet à grignoter — chicken wings to snack on. I was tempted. Then a couple of days later, I noticed one-kilo packages of fresh, raw wings for sale at SuperU. 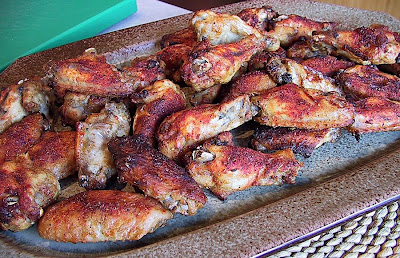 Tandoori-style chicken wings with Indian spices
are really good finger food.
First we made Buffalo-style wings, with celery sticks and blue cheese dressing. The sauce for Buffalo wings is basically melted butter and Tabasco sauce. It's nothing very subtle or complex, that's for sure. But the ones we made were pretty good. Wings are always finger-food, as far as I'm concerned, and Buffalo-style wings are nice and messy to eat. 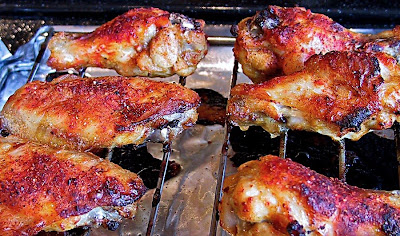 Tandoori wings turn golden brown
just like the Vietnamese-style wings.
A week or two later we made Vietnamese-style Golden Chicken Wings, using (and modifying) a recipe I got off the web. We prepared 12 to 16 wings (weighing 2 to 2½ lbs.), by cutting them apart at the joints. Use just the two meaty sections, and save the wing tips to make chicken stock. Marinate the meaty wing sections for a couple of hours or overnight in the refrigerator in a sauce made with:

Heat the oven up to 400ºF/200ºC. Take the wings out of the marinade and arrange them on a wire rack in a baking pan so they aren't touching. Put them in the hot oven for 30 minutes and baste them a time or two with the reserved marinade while they are cooking. They will be tasty. 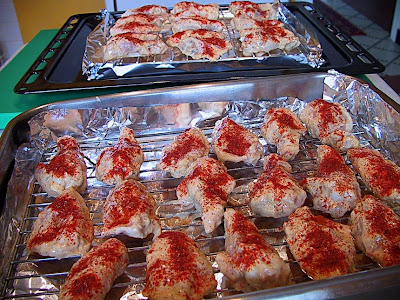 Arrange the wings on racks in baking pans.
I didn't take any pictures of the Vietnamese-style wings. The pictures in this post are of the latest batch of wings we made, Tandoori-style. I don't know if I've ever had wings cooked this way. They were, I thought, the best wings we've made so far.

The method is the same. Cut the wings apart at the joints and use the two meaty sections in the recipe. Freeze the wing tips to use later in making stock for soup or sauces. The wings we have been getting are in 2 to 2½ lb. packages, and that gives us 12 to 16 wings, or 24 to 32 pieces after they're cooked. 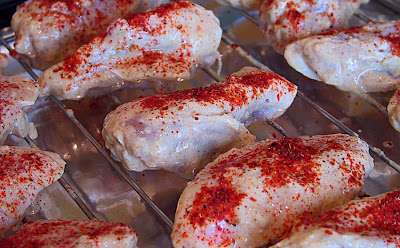 Sprinkle on paprika or Tandoori Massala spices before baking.
Marinate the wing sections for 8 to 12 hours in this sauce:

Vary the spices to your taste. You could also use a pre-mixed Tandoori Massala powder instead of the individual spices listed in the marinade recipe, or even a spicy-hot curry powder, to make the yogurt, lemon juice, garlic, and onion marinade. 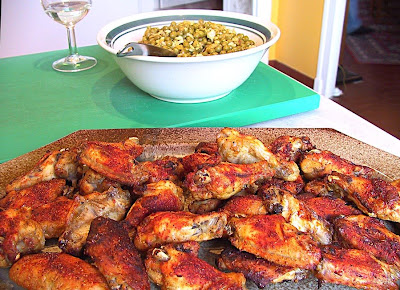 Wings with curried green garden peas and rice
To cook, take the wing sections out of the marinade and let the excess yogurt drip off. Arrange the wings on a rack in a baking pan and cook them for 30 minutes in a 400ºF/200ºC oven. You can sprinkle them with some red Tandoori spices or paprika for color before baking them if you want. You don't need to baste these wings; just let them cook until they are golden brown. 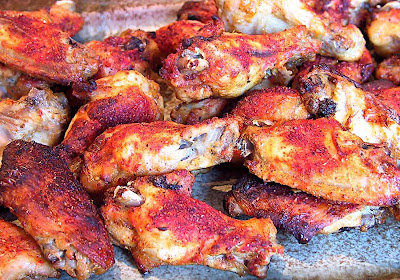 Are you hungry yet? I am.
Let the wings cool slightly and eat them warm, with your fingers. I made curried green peas and rice to have with the ones we made for lunch the other day.

Want to know how best to eat chicken wings like these? Look at this short video.
Posted by Ken Broadhurst at 07:30