Let's say goodbye to the year 2009 and wish for a better 2010. I hear a lot of people saying that 2009 was a stinker of a year, and that the whole decade that is ending was no better.

I agree about the decade, actually, but for us here in Saint-Aignan, 2009 was a great year weather-wise. We had a long, dry, warm summer — maybe to best one since we moved here nearly seven years ago. I can't overstate the importance of that. All the summertime warmth and sunshine really can recharge your batteries and power you through the short, gray, rainy days of a northern French winter. 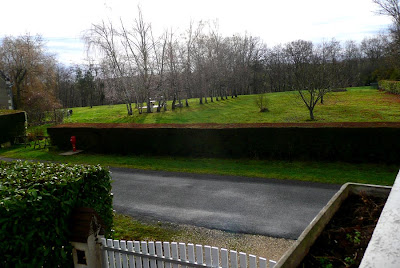 Looking out the kitchen window, you'd think
it was early spring, not December 31.
That said, look at the pictures in this post to see what has happened to our winter weather. It basically went north. A couple of weeks ago we thought we might have a white Christmas. Instead, warm winds off the ocean to the southwest brought us mild temperatures and a lot more rain, and the end-of-year holidays turned green.

We've even had sun, as you can see. These are pictures out our windows that I took yesterday afternoon. Everything is green green green. 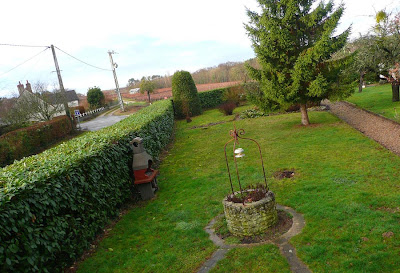 Looking out over the yard and the vineyard on December 30
Last night and the night before, we have had... guess what... thunder and lightning. In December, nearly January now, we are having April weather. I'm not quite saying shirt-sleeve temperatures, but it certainly isn't wintery.

Nobody understands what is going on. Does the weird weather bode ill or well for the future? At my age, it seems to me that I've heard about "weird" and unusual weather all my life. It's a constant theme. So I'm not sure what to think. 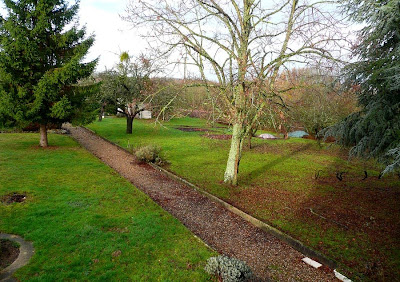 I feel like going out and working in the vegetable garden.
Well, not really.
Tomorrow, hello 2010. That seems like the only certainty at this point. Along with the busy day I'll have today, at the market and in the kitchen, getting a meal ready for company tomorrow.
Posted by Ken Broadhurst at 07:28