This is the recipe for Walt's birthday Steak au poivre, French pepper steak. I've been making it for about 30 years. I don't usually use a precise recipe, but I described how I make it, with pictures, in this 2006 blog post. 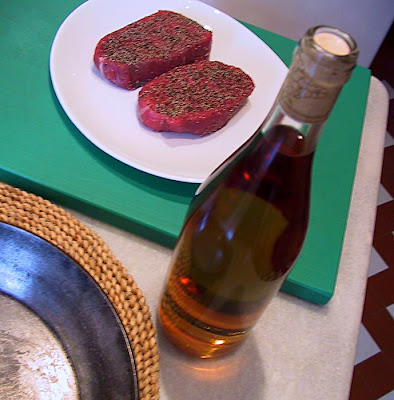 The steaks "marinating" in coarse black pepper and the
bottle of marc de Touraine — a local brandy —made by a
neighbor, which we used to make the pepper-cream sauce.
Here's a recipe for Steak au poivre in French that I got off the Internet. It describes what I do and has the advantage of giving precise amounts for the ingredients. Use it as a guide. This is my adaptation/translation, with American measurements:

Pour a tablespoon of vegetable oil onto a plate and add a pinch of salt. On another plate, put the coarsely ground pepper.

Dip each steak in the oil and then in the pepper so that the pepper sticks to the meat. Let the steaks rest for an hour or even two if you have time.

Set a heavy skillet over high heat and put in a tablespoon of butter and a tablespoon of vegetable oil. When the butter is lightly browned, put the pepper-coated steaks in the pan and sear them for two to four minutes on each side so that they will be done the way you like them (rare, medium, etc.). Take the steaks out of the pan, put them on a plate, and cover them with foil to rest (in a warm oven or other warm place).

While the steaks are resting, pour the fat out of the skillet and put it back on high heat. Pour in the cognac and stir it around to deglaze the pan. Add the white wine and boil it until it is reduced by half. Add the cream and let that reduce by half as well, and then add the concentrated veal or chicken stock.

As soon as the sauce boils again, take the pan off the heat and stir in the Dijon mustard. Taste for seasoning and add salt and pepper as needed.

Add to the sauce any juices released by the steaks, stir well, and then pour the sauce over the steaks — or put them back in the pan, on low heat, to cook a little more, turning them to coat them completley in the sauce.

Serve these steaks with French-fried or sauteed potatoes, French bread, red wine, and a green salad dressed with vinaigrette. The sauce is delicous with French fries. 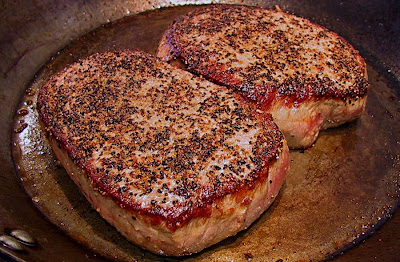 Sear the steaks in a heavy, very hot pan.
I've made this pepper steak recipe using cognac, armagnac, calvados, or other brandies at different times. Bourbon whiskey would also be good. You make the sauce with white wine alone, no brandy, but the flavor will be different.

The steak is good with either coarse black or white pepper (called mignonnette in French), and it's also good with coarsely chopped green peppercorns. Use as little or as much pepper as you see fit. 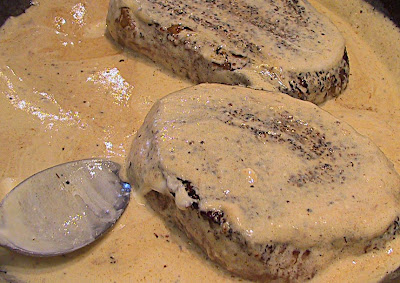 A sauce made with cream, pepper, wine, and brandy.
Julia Child makes her pepper sauce with a little sauteed shallot in it. That would be good too. In a recipe in one of her books, she puts in brandy but no white wine, and in another she puts in white wine but no brandy. Jacques Pépin makes a pepper steak sauce with butter instead of cream, but otherwise it's basically the same thing.

Strictly speaking, the veal or chicken stock is optional, as is the mustard, but both add good flavor. A dark, concentrated stock will give the sauce a darker color too. To me, the most important ingredients are the steaks, pepper, salt, white wine, and cream. The brandy or whiskey can also really enhance the flavor.
Posted by Ken Broadhurst at 07:15