The weather in Saint-Aignan has become "normal" again. The temperature hovers around freezing early in the morning. Yesterday we had quite a bit of frost, and in shady spots it lasted all day. Afternoon temperatures range from the low 40s to the low 50s.

The nice thing is that the sun was out all day yesterday. So even though it was chilly, the day had a pleasant feel to it. Callie and I took an extra long walk in the afternoon. She got really muddy, but that's OK. She has her own shower downstairs in the utility room, so it's easy to wash her off. 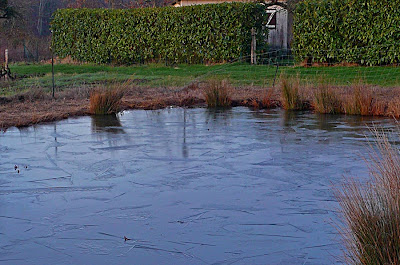 The pond is covered with a thin layer of ice.
Have you ever heard of or read Michael Wright? He's an Englishman who lives a couple of hours south of Saint-Aignan and writes about his life there for the British newspaper The Telegraph. Some of his recent columns are also on the Internet here. 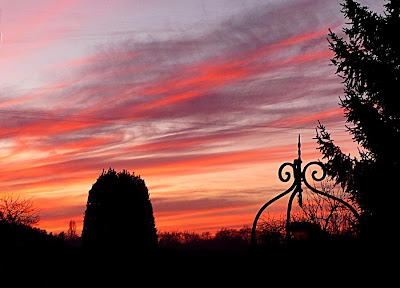 Yesterday's sunset was spectacular.
I've never met or even corresponded with Michael Wright, but for several years I've been reading his reports on life in the place he calls Jolibois ("pretty woods"). He bought an old farmhouse, he says, six or seven years ago and calls it La Folie ("madness" or "the folly"). He keeps animals including dogs, cats, goats, and chickens. He flies an old plane. He plays tennis. He writes about a cast of French characters. And he recently married and has two small children. 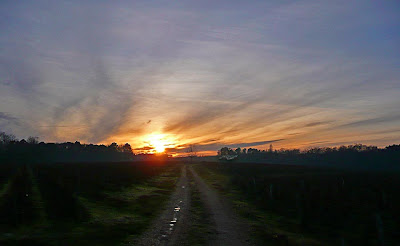 The sky and vineyard at dog-walking time
Lately he has been reflecting on all that he has done over the past seven years. About the struggle to become fluent in French, and how important that is. About why he came to live in France in the first place, and whether he's happy he did. It's all very interesting to me, and some of his reports are hilarious. I guess we all get reflective when a year — and a decade — ends and a new one is ready to start. 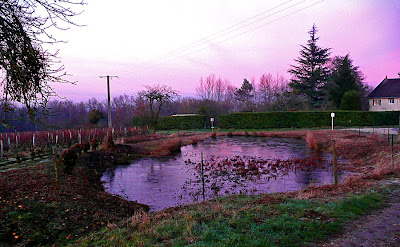 Pink light on and over the pond
The British viewpoint on matters French is different from the American viewpoint in many ways, I think. The historical ties that bind France and England, their geographical proximity, old cultural attitudes and rivalries, and just the sheer number of Brits who have bought houses in France — well, all that puts the British expatriate in a different category compared to Americans like Walt and me. 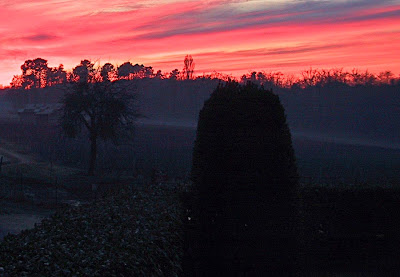 A close view of the sunset out the bedroom window
I'm not sure how far back Michael's archives go on the site I linked to above. You might have to search around a little bit to find more essays and stories of his. He has a website/blog here, and there's an interview with him on this site. Michael has also published a book called C'est La Folie. If you are interested in people who have chucked it all in and picked up and moved their lives to rural France, he is a good read.
Posted by Ken Broadhurst at 06:47