The market in Saint-Aignan is usually held on Saturday mornings, and it operates year-round. Sometimes in summer and on holiday weekends there are more vendors than at other times, and once in a while a vendor will take some time off and be absent for a week or even two, but otherwise most of the same stalls are open every Saturday.

At Christmastime, the market is often rescheduled to match up with Christmas Day and New Year's Day. This year, for example, instead of a market on Saturday, Dec. 26, the market will be held on Thursday, Dec. 24 for Christmas Eve. And the same schedule will hold for Dec. 31 — a market that day but not on Sat. Jan 2. It's pretty convenient, and I'm sure it's more profitable for the vendors that way. 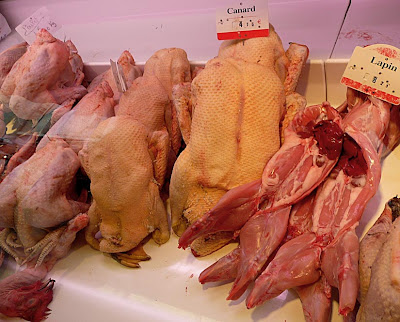 Chickens, ducks, and rabbits at one of the
poultry vendors' stands in Saint-Aignan
Saint-Aignan's is not an enormous market. It's smaller than the ones at Selles-sur-Cher on Thursdays or Amboise on Sundays. The vendors present, though, cover the spectrum of food needs for the people of the town and surrounding area. There are at Saint-Aignan half a dozen vendors selling fresh fruits and vegetables; two poultry stands that also sell spit-roasted chickens, rabbits, and pork roasts; four pork butchers selling sausages and pâtés as well as fresh cuts of meat; one butcher selling other meats; one full-service cheese stand plus two or three vendors selling the local specialty, goat cheeses; and finally, one big fish and shellfish stand. 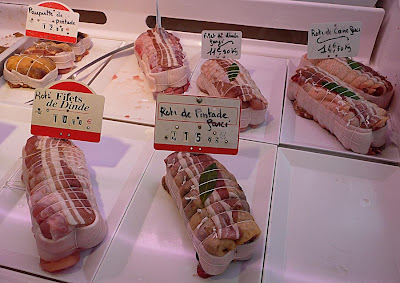 Rolled, tied, and larded roasts of turkey (dinde),
guinea fowl (pintade), and duck (cane or canard)
I've probably left a few vendors out. In fact, I don't want to forget the local mushroom lady, who is always there. There are also a couple of bakers selling breads, cakes, and pies. And there's a man who sells escargots — snails — and another who seems to specialize in apples. I'm sure I've still forgotten two or three of the smaller local vendors, who sell produce from their own gardens and goat cheeses they make on the farm. Recently, there's also been an Asian food stand where you can buy spring rolls and pre-cooked noodle or rice dishes. 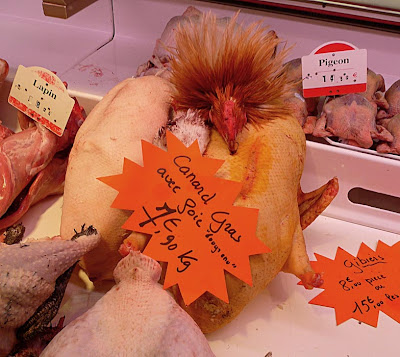 Rabbits, a goose, a rooster, and some little pigeons for sale
A lot of the vendors come in special market trucks that open up into full display cabinets and counters, where you can view all the products for sale. I took pictures of a few of these on Saturday to post here.

We ordered our goose. The woman who took the order wrote it down in a notebook where a lot of other orders had already been recorded. We knew from the price list that a goose would cost 8.50 €/kg (a little less that 4.00 €/lb. — that's not quite $6.00 U.S. at current rates) but we didn't know how much one weighed. The woman said they went from 3 kg up to 10 kg. 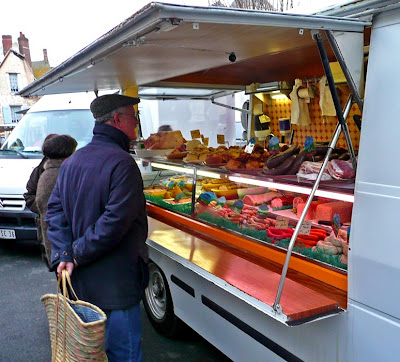 Market trucks that open up to reveal refrigerated display cases
We told her we needed a small one because it was basically just for the two of us. She pulled one out of the display case and said it was a fairly small one. She weighed it to give us an idea — it was nearly 5 kilos. I hope we'll get one smaller than that, but we'll take and pay for what we get.

If the goose is really big, I'll probably cut off the legs and cook them separately in goose fat to make what's called confit d'oie. Then I can use the confit later with dried beans to make a cassoulet. We'll cook the breast and wings for Christmas dinner, with chestnut-sausage stuffing and some Brussels sprouts. Maybe I'll make some biscuits using duck or goose fat instead of butter, to go with it. 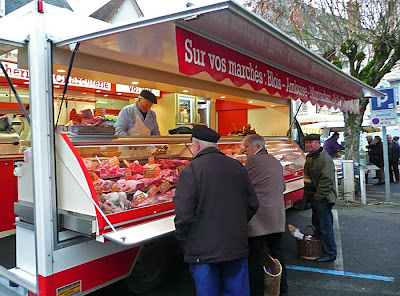 Another market truck selling fresh and cured pork products
P.S. I just stepped outside to get our daily baguette from the bread lady and saw that we actually got a dusting of snow overnight. The bread lady told me that we should start putting some bread in the freezer so that if it snows and she can't drive up the hill to our house, we won't have to go without. She doesn't know about our biscuit and pizza baking skills.
Posted by Ken Broadhurst at 07:42