Variety is the spice...

Some people live on a very limited range of foodstuffs. To me, that's not only boring, but it's not as healthy as eating a wide range of vegetables, meats, fruits, and dairy products. Balance is the key. Too much of even a good thing gets dull before too long, and your body craves something different.

That's what I love about living in France. There's such a wide variety of products available. At the same time, always in the past when I came to spend a school year in France — back when I was a student and teacher — I would lose noticeable amounts of weight before going back to the U.S. The very first time I spent a few months in France, I lost so much weight that my pants were in danger of falling down.

Now that was in part because I did so much walking in France. And that first time, in Aix-en-Provence when I was 21 years old, I lived with a family whose house was a 45-minute walk, up a steep hill, from the center of town, where our classes met. All that walking uphill every evening after dinner really took the weight off. 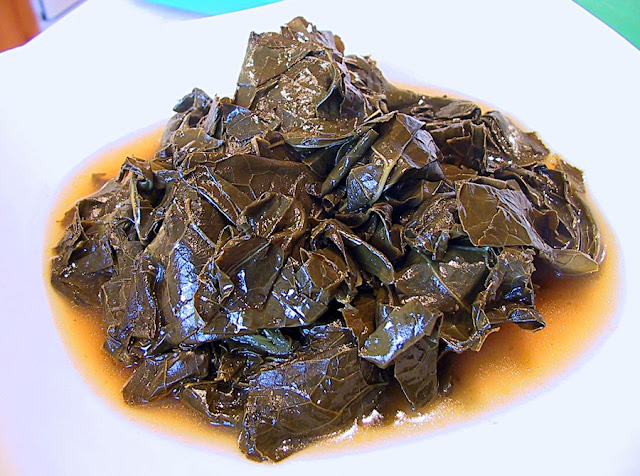 Collard greens seasoned with a little Chipotle Tabasco sauce,
some white wine, and some rendered pork and poultry fat.
The greens cooked for about 4 hours on very low heat
and were tender and meaty.

But so did the diet I was enjoying. On the way to school in the morning, I would stop and buy an apple from a stand in the town's big central market. That I could afford. Coca-Cola and hamburgers, potato chips and candy bars I couldn't. I soon learned that wine was much cheaper than cola with lunch and dinner, and better than iced tea. I'm convinced wine i's better for you, too, in moderation.

For a while I ate dinners at the student restaurant out on the university restaurant on the south side of Aix. But that put me even farther from "home," lengthening what was already a long walk. You had to stand in a long line and push your way into the place to get served. Soon I and some of the other students found a little restaurant that served a plat du jour, a daily special, early every evening. I'm pretty sure it was called Chez Nénette, and I'd be amazed if it still existed. It was affordable even on a poor student's budget. 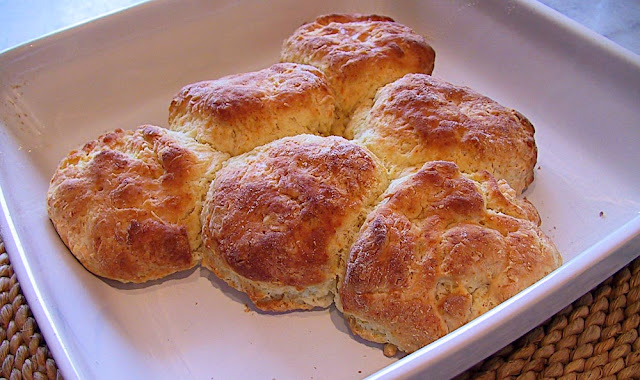 Yesterday I made what we call "biscuits" in the U.S.
In other anglo countries and in France, biscuits are
of course something else entirely (cookies, crackers).
These biscuits turned out great and went well with greens.

The variety of foods served in such a restaurant was incredible. Salads the way you get them in France: one vegetable at a time, or an assiette de crudités where each little salad is separate, not tossed all together. Salads or side orders of tomatoes, lentils, carrots, beets, red cabbage, green cabbage, Belgian endive, Brussels sprouts, cauliflower, red beets, new potatoes, mushrooms, red beans, green beans, celery root, incredible green peas (petits pois) and on and on. Not to mention a lettuce salad at the end of the meal. The salad dressing was always vinaigrette — oil, vinegar, and mustard — with no sugar. Imagine. Oh, and each meal ended with a piece of cheese.

I ate things I had never tasted before. Veal. Lamb. Rabbit. Guinea fowl. Duck. Goose. Pâtés. Smoked sausages. Rillettes. And many unfamiliar fishes — skate wings, monkfish, smelt, and more. Quiches and runny omelettes with mushrooms, ham, and cheese. Almost nothing was breaded and fried, and as often as not all these good things were cooked in a wine sauce of some kind. I ate butter, where in the U.S. we ate only margarine. Oh, and the cheeses! 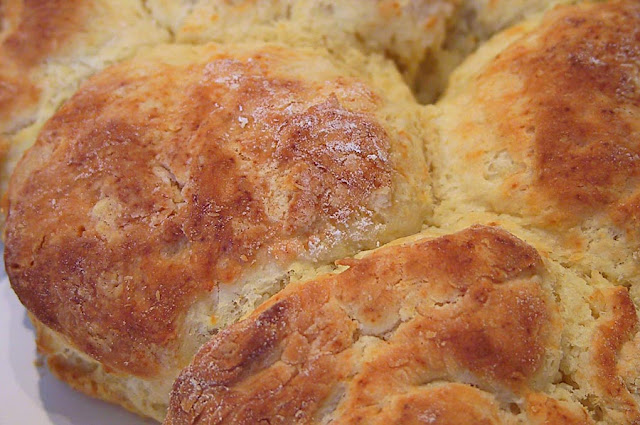 Thanks to Tom, a friend in Illinois, for the biscuit recipe.
It's on An Amateur Baker in Sidney. I used all butter
to make the biscuits because we don't have Crisco-
type shortening here in Saint-Aignan.

There were desserts too, but the portions were small — the portions of all the different parts of a meal were smaller than what I was used to — and the desserts weren't so sweet. So I was eating less sugar (no cola or sweet tea), smaller portions of everything, and a much wider variety of foods than I had been eating in the university cafeterias in the U.S., where I remember living on beans and franks, and tossed iceberg-lettuce salads with "French" dressing, for weeks at a time.

The result was that I lost something like 20 lbs. in 6 months. It's true that I never felt really stuffed, or even full, in Aix. But then again I had a lot of energy, I was getting a lot of exercise, and I was learning a lot about food. And enjoying it in ways I had forgotten.

When I was growing up, we had good foods — fish including flounder, spots, hogfish, croakers, and bluefish; shrimp, blue crabs, clams, oysters, and scallops (we lived on the coast); fantastic tomatoes in summertime; cabbage, collard greens, and beans year-round; chicken, pork — that good Eastern N.C. pork barbecue, especially — and beef, of course; cornbread, including hushpuppies, and yeast rolls. After going off to college, I realized that my mother was a really good cook. She worked full-time and the budget was limited, so it must not have been easy to keep us fed so well.

But the sheer variety of the foods I ate daily in France was something I hadn't experienced before. It all tasted very fresh and you could actually taste the different ingredients and appreciate the flavors and textures. Dinner wasn't a hodgepodge, with everything tossed into the same bowl or pot. There was so much less sugar. Oh, and did I mention the bread?

Now it Saint-Aignan, we have all that variety in the markets and supermarkets, but to extend it we grow and make our own specialities from home. We grow things we can't usually buy here: collards, sweet corn, okra, mustard greens, and more. And we cook, once in a while, collards, cornbread, fried chicken, gumbos, jambalayas, and other things we remember we liked at home. It keeps life interesting.
Posted by Ken Broadhurst at 08:10