The good news is that we have plenty of wood. And that the central heating system in the house seems to be working fine. The car is in the garage. There's no need to go out, because the freezer, the pantry, and the cupboards are full.

The temperature this morning is -6ºC — that's +21ºF, and that's very cold by Saint-Aignan standards. This is not record-breaking cold, but it feels frigid. The temperature where I am sitting, downstairs by the front door where my computer is, was 11ºC — 52ºF — when I came down half an hour ago to write this. I turned the heat on and it's up to 12º now. 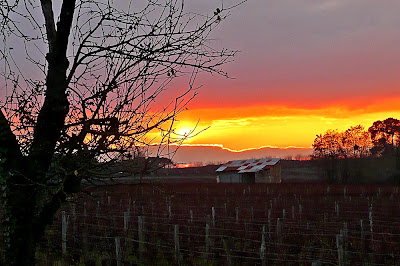 The sunset from our back gate yesterday afternoon
According to the TV, the ground is already snow-covered up in Normandy, and north of Paris in Picardy. We are in a flow of air coming down from Scandinavia and Russia, they say. It's supposed to start snowing in Paris early this morning and then the snow will move south and west to cover the Loire Valley and surrounding regions.

We live up on the high ground along the south side of the Cher River, and the hill to get up to our hamlet is pretty steep. I can walk up it without too much trouble, but I can't really ride a bicycle up it — I'm not in that kind of shape. If it gets snowed over, and then ice forms, the little road will be impraticable for cars. 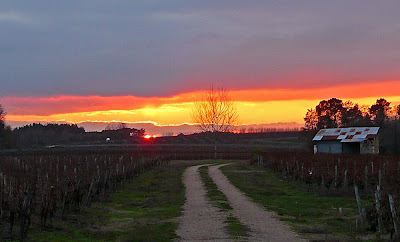 And from out on the dirt road a few minutes later
I went out yesterday and stocked up on groceries, in anticipation of the roads being slippery today and tomorrow. Some reports say it will be even colder in Saint-Aignan next week.

Did I tell you the bad news we got this week? Our morning bread delivery has been cut from five to four days a week. I know, that's not a tragedy. It is, however, a move in the wrong direction, as far as I am concerned. The Monday bread run was not profitable, the bread lady said, so it has been cut. 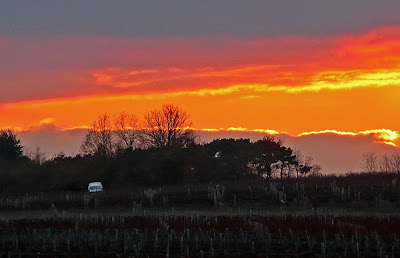 Bruno was out pruning his vines as the sun set.
The temperature was at freezing, but Callie didn't mind.
It sure is easy to get spoiled by mild weather and frequent bread deliveries. Now I have to go walk the dog. 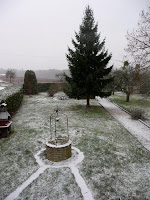 A few days ago I read an article about a University of Missouri study of people's success in walking daily for exercise. It said that people who walk dogs are more likely to go out for a walk more faithfully every day, and they end up walking a lot faster than people who walk with other people. They get more exercise in both ways. Dogs are less likely than a human walking companion, the study pointed out, to say to their buddy: "Are you sure you want to go today? It's too hot/damp/cold. Let's just skip it for today and go tomorrow instead."
Posted by Ken Broadhurst at 07:09