More about gastronomes and fromages

It's funny and revealing, the French word « gastronome », I think. How do you translate it? The Grand Robert et Collins dictionary gives “gourmet” and “gastronome” — only the first of those works for me. However, the American Heritage Dictionary says a “gastronome” or “gastronomer” (!) is “connoisseur of good food and drink; a gourmet.”

I hear English-speaking people use the term “gourmand” for “gourmet” in English, and I don't like it. But they aren't wrong. The AHD says in a usage note: “A gourmet is a person with discriminating taste in food and wine, as is a gourmand. Gourmand can also mean one who enjoys food in great quantities.” To me, it means the latter more than the former. 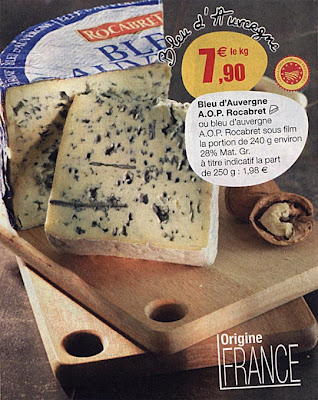 Courtine describes Bleu d'Auvergne cheese as having
« un goût un peu sauvage, piquant, très remarquable »
— a taste that is slightly earthy, sharp, and quite remarkable.
In French, the two terms are more differentiated. A gourmand just loves food. I'm one of those. A gourmet is, according to the Grand Robert dictionary, a « personne qui apprécie le raffinement en matière de boire et de manger » — a person who appreciates refinement in food and drink. I guess I'm also one of those, but if you put the two words on a scale, in my case the gourmand would greatly outweigh the gourmet.

Sometimes, I think my tastebuds must not be very sensitive, because they like nearly everything that passes over them. 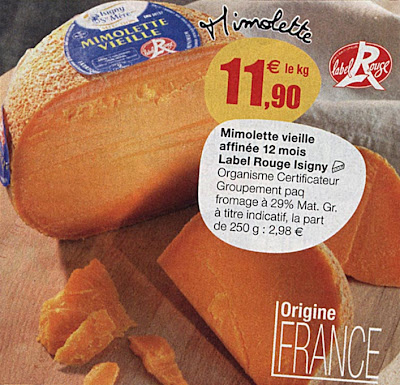 Courtine doesn't have a lot to say about French-made Mimolette,
which resembles an American orange-colored Cheddar or Colby. About
“authentic” Dutch Mimolette, he says it is « d'une grande finesse
de pâte » — of a very refined texture and taste.
Anyway, I assume the late great Robert Courtine, was a (French) gourmand and a gourmet, an epicure and a gastronome (or gastronomer or gastronomist). He was what we would call in our straightword American English a “food writer” — he wrote 1500 columns as a chronicler of cooking and restaurants for the Paris daily called Le Monde, under the pen name La Reynière. His mentor was the great Curnonsky.

Evidently, he liked good puns — « Courtine-La Reynière aime les calembours bons », I read in an article published on the occasion of the gastronomer’s seventieth birthday, in 1980. He supposedly lamented in a column the decline of the good old mixed drink, the cocktail, which was losing favor to brand-name apéritif drinks in France: « L'art chatoyant des coquetels se perd. Saint Zano, priez pour lui. » I'm not going to translate that. 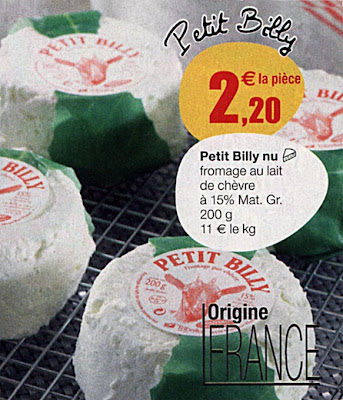 What Courtine says about Billy goat cheese mystifies me.
He describes it as being made in the village of Billy, near
Selles-sur-Cher and Saint-Aignan. But the only Billy I've
ever seen is this Petit Billy cheese that is made in Brittany.
Robert-Julien Courtine billed himself as Robert J. Courtine when he wrote the Larousse guide Les Fromages (1973, 1980) and when he published a revised and corrected version of the voluminous Larousse Gastronomique (1967) food and cooking encyclopedia. I wonder why he adopted an anglicized version of his name, but never mind.

He was called the « prince sans couronne de la gueule » — the uncrowned prince of the gullet, I guess you could say. Somebody who is a « fine gueule » has a fine gullet, or very discriminating tastes in food and drink. Did you know that people who are in the business of selling, preparing, and cooking food are said to exercise « les métiers de bouche » — the mouth trades?

Getting to the point: here's what Robert J. Courtine says about Morbier cheese in Les Fromages. After describing it as a cheese made by taking the curds from the bottom of the vat after the good curds used for making Comté cheese have been skimmed off the top, he says:

« Le Morbier est plus une curiosité qu'un fromage attractif par ses vertus gustatives et son intérêt gastronomique. » — “Morbier cheese is more of a oddity than it is a cheese that appeals by virtue of gustatory qualities or gastronomical significance.”

Let me quickly add that Walt and I both enjoy Morbier and have been buying it for years, both in France and in California. However, a friend who knew Paris well back in the 1940 to 1970 period once told me he had never really heard of it until much more recently. It must not have been “exported” to markets outside of its local environment until the 1970s and '80s. 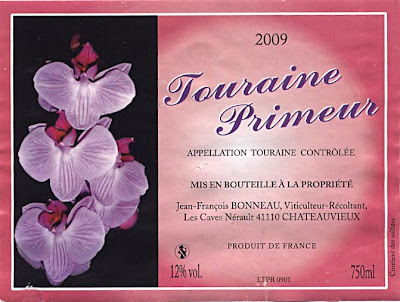 I wonder what Courtine would say about « Nouveau » wines
like our local Touraine Primeur. I bet it wouldn't be praise.
And here is more of what Courtine says about the classic Swiss cheese fondue, or la fondue savoyarde as it is known in France. First, he compared la raclette to la fondue by saying the former was « combien meilleure » — so much better — and « plus chaleureuse, plus savoureuse ! » — much heartier and tastier. Then he snidely dismisses cheese fondue by saying:

Now I'm not at all sure about translating « communautaire » as “Europeanized” but it's as good a guess as any. I think he might mean that the fondue has been bastardized and corrupted by being adopted and adapted by cooks in so many regions and countries. It doesn't have a very strictly defined identity — not the way la raclette does.

I think, too, that what might bother an old-school French gastronomer (!) about a dish like Swiss cheese fondue is that it includes a hodgepodge of ingredients. Three different, albeit fine cheeses are mixed and mashed into a gloppy mess, with the addition not only of white wine but also kirschwasser, nutmeg, and cornstarch. How much more elegant and pleasing is a good, rich cheese simply melted slightly and immediately served. With la raclette, you know what you are getting. 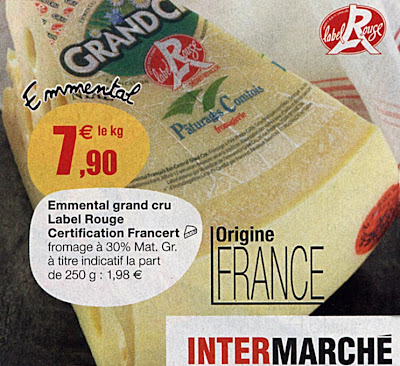 Here's a cheese that usually goes into a fondue.
Okay, all that said, I have to admit that Walt and I started making cheese fondue again, after years of not even thinking about it, at least 10 years ago. We enjoy preparing and eating a fondue savoyarde every Christmas Eve, using a selection of cheeses. I follow a recipe given to me by a French friend, one who had lived in the eastern part of France where fondue cheeses are made, more than 30 years ago. We've used combinations including Gruyère, Emmental, Comté, Beaufort, and even Cantal cheese for our fondues since we moved to Saint-Aignan six years ago.

So we love fondue, despite what Courtine says about it.

After all, Robert J. Courtine was also quoted as saying that the potato is « un tubercule exotique d'origine récente [qui] n'intéresse pas notre cuisine » — “an exotic tuber of recent origin that doesn't have a place in French cuisine.” Joël Rebuchon, if he were dead and buried, would be spinning in his grave. I guess Courtine would have considered Gratin Dauphinois a bastardized and corrupted dish as well.
Posted by Ken Broadhurst at 10:53