Wow, look what Intermarché is featuring as its star products this week. Gibier. Game. Well, we do live on the very edge of La Sologne, which is an area famous for hunting, and for adorning its dinner tables with what gets bagged.

It's interesting, too, how different supermarkets in France can be from each other. A lot of people lament the standardization of food offerings around France and see supermarkets as the culprits. La grande distribution, as it's called, is seen as being at odds with current trends, like promoting locally-produced foods. But here in the Saint-Aignan area, the butchers at Intermarché do just the opposite. 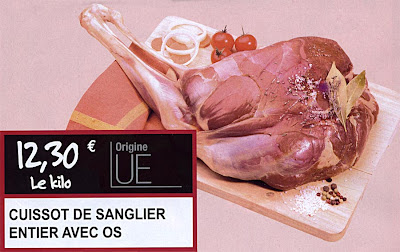 A haunch of wild boar for dinner? It's on sale at 5.59 € a pound.
I'm pretty sure that the butcher counter over at Intermarché is a concession run by local butchers, not just another department in the store. In other words, these butchers in the past would be working out of their own shop in town. Nowadays, however, they set up shop where the customer traffic is, and that's in a supermarket. Of course, the store also sells packaged, brand-name meat products. 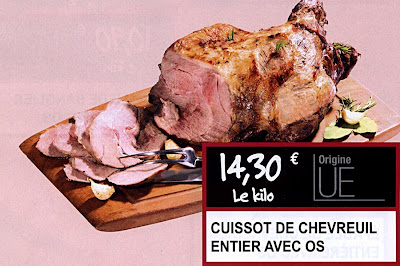 How about some roe deer venison at 6.50 €/lb.?
Over at SuperU, our other main supermarket, you can feel the differences in the meat, cheese, and produce departments. There's something slicker, less rustic and les old-fashioned about the store. There's no cheese counter where you can ask for a piece of Brie or Gruyère to be cut off a big wheel for you, for example. Most of the cheeses are in a self-service counter, in styrofoam trays and wrapped in plastic, pre-cut. 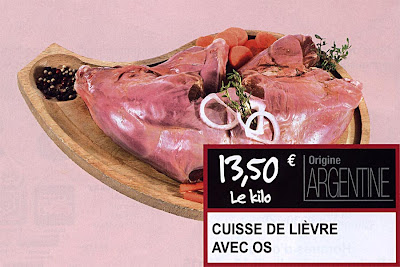 I have my eye on these: thighs of a wild hare at just over 6.00 €/lb.
Seems to me they might be good made into confit for a cassoulet.
I've never seen a sale like the current Intermarché promotion over at SuperU. But then SuperU has a better selection of many things, including and especially sausages in the meat department. The butchers over there obviously specialize in sausages. At Intermarché, they specialize in locally produced meats you don't find elsewhere: ducks in the fall, rabbits in the summer, beef and pork in all seasons. And right now, game animals. 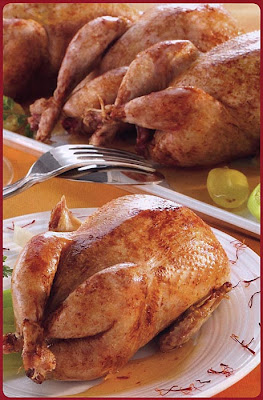 How about a pheasant? They're priced
at 9.95 € apiece — about $15.00.
The Sologne is a 2,000-sq.-mile area of forests and small lakes that has never really been developed. The biggest town is Romorantin, population 20,000 or so, but the Sologne is mostly an area of small villages out in the woods. It's south of Orléans, north of Bourges, and east of Tours. When you look at satellite pictures of the Loire Valley region, the triangular area of forest that is La Sologne really stands out clearly. 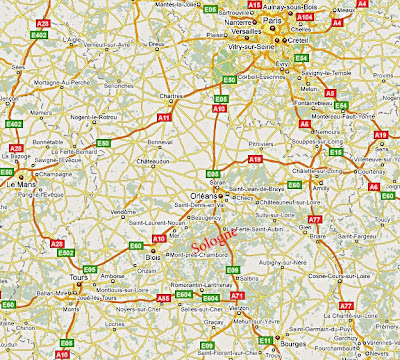 Here's a map showing Paris, Orléans, Tours, Bourges, and La Sologne.
Saint-Aignan is on the southwestern edge of La Sologne, the northwestern edge of Le Berry, and the far eastern edge of La Touraine. Three old provinces come together here, then, with their different cultures, histories, economies and landscapes. La Sologne is forested, Le Berry is rolling fields of grain, and La Touraine is an area of vineyards and small vegetable farms ("le jardin de la France"). 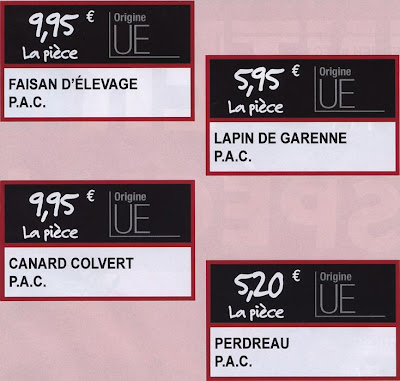 No pictures of these, but they are faisan ( pheasant), lapin de garenne
(wild rabbit), canard colvert (wild duck), and perdreau (partridge).
P.A.C means prêt à cuire — oven-ready (plumed/skinned and gutted).
Actually, Saint-Aignan, now with « -sur-Cher » appended to the name, used to be called Saint-Aignan-en-Berry. It is on the border with Touraine but on the Berry side. The village we live in, just west of Saint-Aignan, is in La Touraine, if I can believe the local people I know — we live on the edge of a vineyard, after all. Across the river is the Sologne, which is part of the Orléanais province. The old French provinces have historical and cultural significance, but they are not political or administrative units the way they used to be. 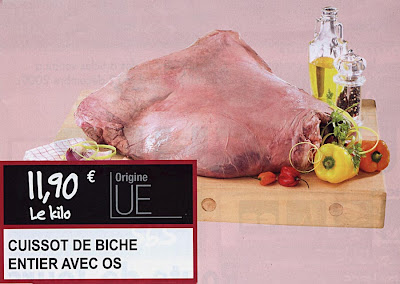 And here's a haunch of the large red deer native to our area.
It's a little less expensive than the boar, roe deer, or hare.
And we do have game animals here. We see rabbits and hares frequently. There are pheasants and partridges and other game birds in the woods and vineyards. Deer, both the smaller roe deer and larger red deer, are all around us — as in many areas, the populations are too large. We have seen wild boars not 5 minutes north of Saint-Aignan, crossing the road at night. And there are, as well, big animals that are not hunted as food: badgers, foxes, great white owls, blue or gray herons, and many birds of prey.

Saint-Aignan has a big, highly reputed zoo. One day, according to the woman who sold us our house seven years ago, she and her husband were sitting out on the front deck, enjoying warm weather, when a kangaroo went hopping down the street. No, kangaroos are not native to the region. This one had escaped. They called the zoo, and the animal was pretty soon rounded up and taken back to its pen.

In fact, it was on a Tuesday in early December seven years ago that we first laid eyes on this house. We looked at each other and decided this is was the one. It was December 10, 2002. When we moved in 6 months later, deer frequently grazed in our back yard early in the morning.
Posted by Ken Broadhurst at 09:00