Back in 1987, Walt and I were living downtown in San Francisco, just on the edge of Japantown. He was preparing to have a party for some friends and he wanted to make a vegetable terrine using spinach, cauliflower, and carrots. The problem was that we didn't have a blender or food processor with which to make the necessary vegetable purees.

So on the spur of the moment, we went down to Macy's on Union Square and we bought a food processor, the first one I'd ever owned. It was (and still is) a Braun model. Twenty-two years later and far from California, we are today using the same food processor, and we use it several times a week. It was a good investment.

The recipe for the vegetable terrine was a keeper too. In French it's called « Terrine de légumes aux trois couleurs », and we got it out of a book called Terrines, pâtés : 80 recettes simples et raffinées (1985), part of a series called « Vieilles recettes de nos villages » — "old recipes from our French villages."

Here are links to two blog topics that Walt published a few years ago, with nice pictures, about the vegetable terrine: topic 1 and topic 2.

And here's what the recipe says to do to make the terrine: 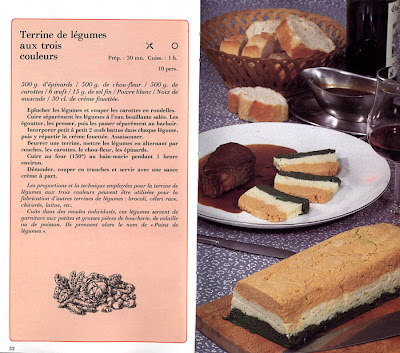 Cook the vegetables separately in boiling water with a little salt. Drain them and squeeze out the excess water. Puree each vegetable separately in a food mill, grinder, or food processor. Let cool.

Into each puree, mix two beaten eggs and one-third of the whipped cream. Add salt, pepper, and nutmeg to each mixture, to taste.

Butter a loaf pan and put the vegetable purees in by layer, starting with the carrots, then the cauliflower, and finally the pureed spinach.

Unmold the vegetable terrine and serve it with a cream sauce in a gravy boat.

In the notes, the author says:

Cooked in individual molds, these vegetable purees are good served with grilled or roasted meats, including beef, poultry, and fish. In this case they are called "Vegetable Loaves."

And you could easily use frozen rather than fresh vegetables to make it. Walt used frozen spinach, and he ran the cooked vegetables through the food (meat) grinder instead of whizzing them around in the food processor because he wanted a slightly coarser texture. A manual food mill would work well too.
Posted by Ken Broadhurst at 08:00