When I tell my English and Irish friends that I'm going to poach a goose in water, they look at me like I'm crazy. Then they launch into a big debate over whether you should put the goose breast-down or breast-up in the roasting pan to start it cooking in the oven.

Last night, Christmas Eve, we were invited to a small dinner party in Saint-Aignan. Around the table, we were two Americans, one Frenchwoman, one Englishman, one Irishwoman, and one Dutchman. While the Irishwoman and the Englishman were discussing how the goose should be roasted, breast up or breast down, the Frenchwoman said: "But boiling meat is the English way to do it. They always cook meat that way, don't they? It's a cooking method called
« à l'anglaise »." That started a different discussion, as you might imagine. 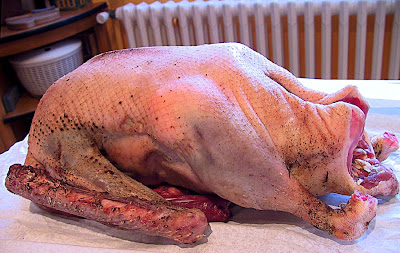 A 9½ lb. goose, or oie — a fine specimen, I'd say.
Poaching large pieces of poultry is something I've learned to do since I've lived in Saint-Aignan. I learned it from a French chef who has a show on the French channel known as Cuisine TV. I've poached turkeys, ducks, guinea fowl, capons, and regular chickens. After you poach the bird, you take it out of the liquid, let it dry for a few minutes, then baste it with fat and put it in a hot oven for 20 to 30 minutes, until the skin turns a golden brown. 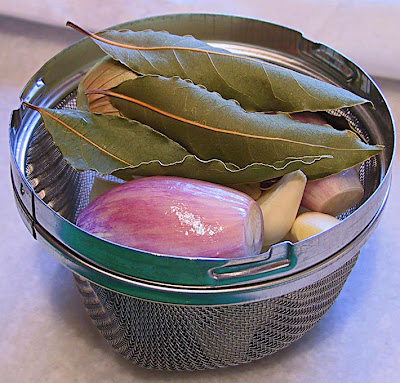 I put the aromatics in a spice ball to cook in the poaching liquid.
So this Christmas I'm cooking a goose for the first time ever, and I decided to use the poaching method. When we decided months ago that we would cook a goose for our holiday dinner, I hadn't really thought about poaching it. I was just going to roast it in the oven.

Then I read about roast goose in Julia Child's The Way to Cook book. She recommended steaming the goose for an hour, then braising it for 90 minutes at least, and finally browning it in the oven for 30 minutes or so. 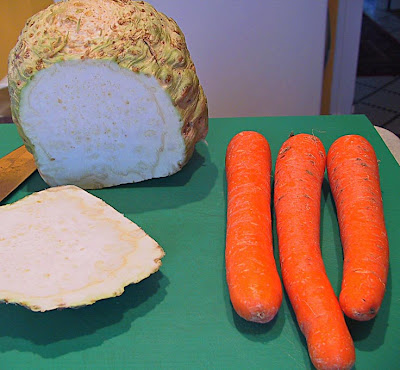 Celery root and carrots to flavor the goose broth
Well, that made me think of the poaching option again, and poaching seemed simpler than steaming followed by braising. When we went to the Christmas Eve market in Saint-Aignan this morning to get the goose we had ordered, we didn't know how big it would be, and that mattered. It turned out to weigh 4.3 kg — that's 9½ lbs.

That wasn't the most important thing, though. What mattered most was whether the goose would fit in our biggest cook pot for the poaching. It was too big for a stainless steel pot with a heavy aluminum bottom, which was the one I wanted to poach it in.

But it did just barely fit in another pot, a big old crab boil pot that I hardly ever use any more. I think I bought it many years ago when we lived in Washington DC and blue crabs were readily available and not expensive. You know the kind of pot I mean — light-weight, with a black enamel coating speckled with white. The one I've got is 33 cm/13 inches in diameter, and it's pretty deep. 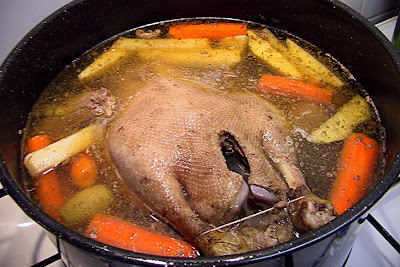 The goose surrounded by vegetables, poaching peacefully
I poached the goose for two hours on the lowest flame, so that it was just barely simmering. You don't want it to be boiled, in fact — just poached. Into the poaching liquid — salted water — I put three carrots, a couple of slices of celery root, two small onions, two shallots, three cloves of garlic, three big bay leaves, a dozen or more black peppercorns, and half a dozen allspice berries.

I would have used stalks of celery but I happened to have a big round celery root, and that has the same kind of flavor. I left the carrots and celery in the broth just long enough to cook them well, and we will eat them with the goose. Or I might put the celery in the stuffing. 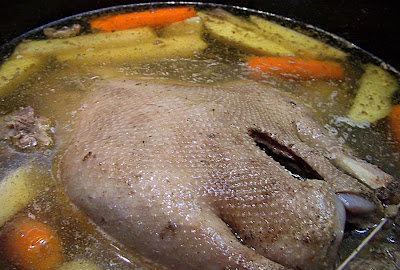 I hope the goose will be succulent and flavorful,
as well as golden brown by the time we eat it.
After two hours of poaching, I turned off the gas and let the goose cool down in the liquid, on the theory that if it cooled in the aromatic liquid overnight it would absorb more flavor. I noticed a nice thick layer of goose fat floating on the surface of the liquid. That is fat that didn't spatter all over the inside of my oven. This morning, the fat has congealed on the surace of the poaching liquid.

Now all I have to do is get the goose out of the big pot of what has become goose broth and into the oven to brown for a few minutes. Oh, and make some stuffing, and trim and cook some Brussels sprouts. Lunch will be ready.
Posted by Ken Broadhurst at 08:00