According to the Larousse Les Fromages book, written by the late gastronome Robert Courtine, la raclette is a typically Swiss dish. It originated in the Swiss canton called Le Valais. Raclette is both the name of the cheese and the method of melting and eating the cheese. It's pronounced [rah-KLEHT].

It's winter and the cheeses that the French markets and supermarkets are featuring prominently are Alpine cheeses, including Raclette, Reblochon, and Morbier. Reblochon cheese is used to make a hearty dish called la tartiflette, kind of casserole of sliced potatoes and pork lardons (chunks of bacon) smothered in cream and cheese. Reblochon is also often be served as part of a cheese tray or platter and, like Morbier, eaten just as it is, not melted.

Here's a pasteurized Raclette for just over U.S. $3.00/lb.
The more expensive Reblochon is made with raw cow's milk.
Raclette and tartiflette are dishes you eat after a day outside in cold weather — skiing or hiking in the mountains, for example. They are filling and give you energy to do it again tomorrow. But both are now served in all parts of France in the wintertime.

So what exactly is raclette? The cheese itself originally came from Switzerland but now is also produced in France. Raclette is shorthand for fromage à raclette, or raclette cheese. It's usually a rich cow's-milk cheese, but in this weeks supermarket advertising flyers I see at least one example of a goat's-milk Raclette. 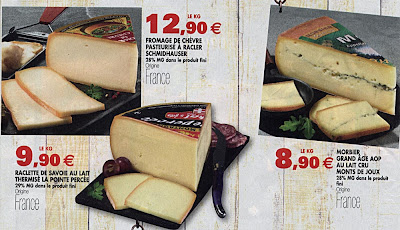 For $8.75/lb. you can get pasteurized goat cheese (upper left)
for raclette. For $6.75/lb. there's a thermalized cow's milk Raclette
(lower left). The Morbier cheese on the right is made with raw milk
and is an eating cheese , not a cooking cheese.
In other words, raclette cheeses have common characteristics, but they are not all identical in composition or made the same way. Some are made from raw milk, some from pasteurized milk. Most are made with cow's milk and some might be goat's milk.

The Raclette on the right seems to come in both pasteurized
and unpasteurized versions. It sells for about $5.00/lb.
And there's another raw-milk Reblochon on the left.
Traditionally, a big round of raclette cheese, weighing up to 20 lbs., was cut in half, mounted on a special stand, and set on the hearth in front of a hot fire. As the cheese started melting, it was gradually scraped off onto warm plates and taken to the table, where all the garnishes were waiting. The French verb racler, from which the term raclette is derived, means "to scrape off" or "scrape out" and comes from Latin.

Nowadays, people have special raclette appliances the way you might have a fondue set. The raclette set is a electric heating unit that you set on the middle of the table and into which each person slides a little metal tray with some cheese in it. Often there's a grill or stone on top where you can cook mushrooms or sliced peppers as you go. When the cheese has melted in the little trays, you pull one out and eat the cheese with the vegetables and meats. It's hard to describe, but here's an example.

Years ago, before people had all these special-purpose appliances, I had raclette made by putting the cheese on a little plate, putting the plate in a medium oven, and then bringing it to the table warm after the cheese had melted. It was just as good but more trouble for the cook.

Robert Courtine says that la raclette is better, tastier dish than the typical fondue, which is cheese melted in white wine and often served only with bread. La raclette is a dish that « le gourmet préfère de loin aux fondues » — a dish that a gourmet prefers by far compared to fondues. 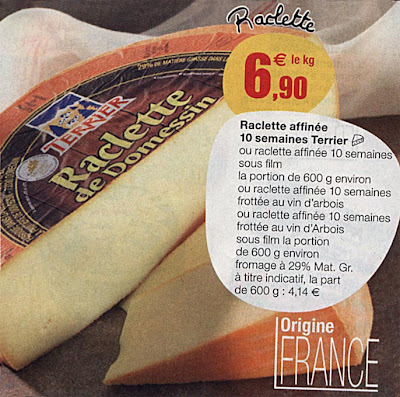 From a different supermarket, here's a Raclette
that comes in several styles, all aged for 10 weeks.
We've used raclette cheese on pizzas. It melts to a smooth, almost runny consistency, and it's delicious. Courtine says the Swiss cheeses traditionally used for la raclette — fromages de Conches, de Bagnes, d'Anniviers, ou d'Orsières — have a flowery and creamy aroma that he attributes to the grasses and flowers of the pastureland where the cows graze.

As you can see from the ads I've scanned from the supermarket flyers we get in the mail every week, there are many types of raclette cheese to choose from, and the prices vary widely. You have to think a lot of people are making a raclette fairly often to use up all this cheese.

Note that all the cheeses in these ads are marked as « Origine : France ». None comes from Switzerland at all.
Posted by Ken Broadhurst at 07:59