How the “boiled” goose turned out

I've put my foot in it now. Mettre les pieds dans le plat, as they say in French — "to put your feet in the dish." Stepping into it. That means saying more than one should, and not very diplomatically, about a sensitive question, une question qui fâche, and maybe upsetting some people. In this case, I don't think anybody is really upset, but I also don't think our French friend was making anything up when she talked about traditional English cooking being based on boiled meats and vegetables. 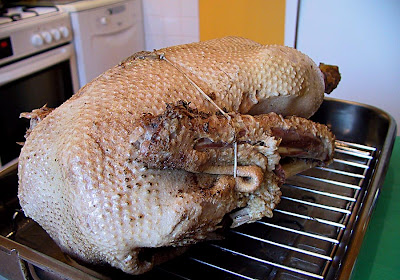 Here is the "boiled" goose, before browning.
Voici a classic recipe from a French cookbook: Leg of Lamb or mutton à l'anglaise. It says: "Boil some carrots, turnips, onions, and herbs for two hours. Drop the leg roast into the boiling liquid and let it cook for 15 minutes per pound. Drain and serve surrounded by the vegetables. Make a caper sauce and serve it alongside in a gravy boat. The boiled meat is also good with mashed potatoes or pureed white beans." 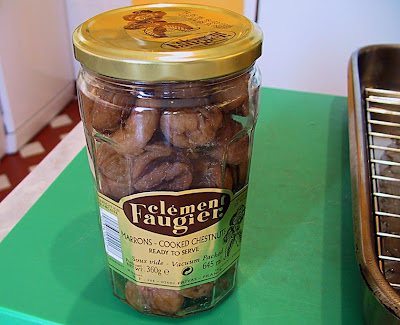 For the stuffing, a jar of marrons — cooked chestnuts
And that's just one book — Ginette Mathiot's Je sais cuisiner (1970), of which I understand a new edition is currently being prepared for publication. The Larousse Gastronomique (1967 edition) gives this definition of the method of cooking called «à l'anglaise » — "Name given to various recipes most often calling for boiling foods in water (see 'Leg of Mutton in the English Style') or chicken broth (see 'Pullet in the English Style')." 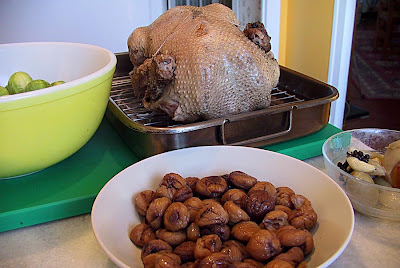 The poached goose, some chestnuts and some sprouts
So the French woman in my story didn't make this up. It's the standard French opinion of the English way of cooking. Of course, the recipes don't call for boiling the meat until it is so cooked that it is falling off the bone (though that might be good too). If you boil a leg of lamb for just 20 minutes per pound, it will be rare in the middle. I've never tried it, but now I'm very tempted.

And now I (and others) are doing the same kind of thing with, especially, poultry. Except that once the bird has been boiled — or delicately poached, if you're careful and keep the heat low — you then put it in a hot oven for a while to dry it out and let the skin turn a golden brown. The roasting stage adds flavor and is much less messy than roasting a raw bird. 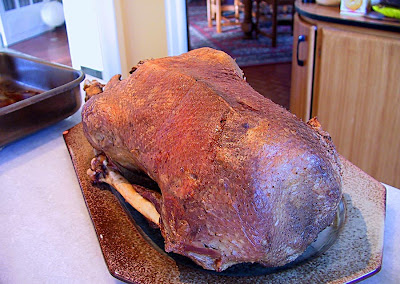 Here's the poached goose after browning in a hot oven.
Somebody at the dinner party the other night pointed out that, in fact, English people, like French people, didn't have ovens in their kitchens until relatively recently — say 100 years ago. Earlier than that, they cooked in big fireplaces (if they had one) and either roasted meats on spits — à la broche — or boiled their meats and vegetables in voluminous cast iron pots placed close the the hot fire, or suspended above it.

In France, people were able to roast meats in the local baker's oven after the day's bread had been baked — and for a fee, probably. In the country, many if not most villages had a four banal, a community oven, where people could take their roasts and pies and gratins for cooking. I don't know if England has a similar traditon of community ovens. 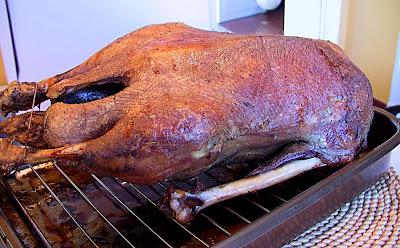 Another shot of the golden brown goose — notice
how there's almost no meat on the wing.
Back to the present: the boiled goose was good. I let it sit overnight in the poaching liquid. A layer of mostly congealed fat covered the surface in the morning, but there wasn't nearly as much of it as I thought there would be. I set the pot on a burner just long enough to warm it up and melt the fat, and then I used a ladle to scoop nearly all the fat and liquid out, putting it into another pot for further simmering. 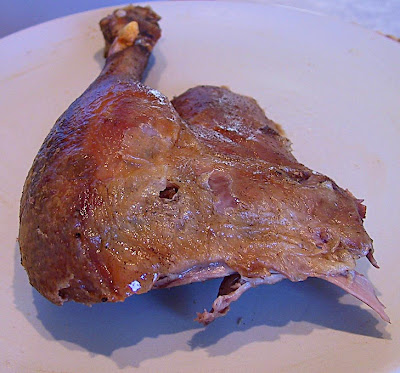 I cut off and froze the leg & thigh sections for later.
At that point, the goose had cooled down enough that I could just reach in and pick it up with my impeccably clean bare hands and set it on a rack in a roasting pan. It sat and dried out well for an hour or so — that's part of the recipe. When it was time to put it in a 400ºF/200ºC oven for browning, I brushed it all over with some of the liquid goose fat. Some drippings had collected in the bottom of the roasting pan as the goose rested, and to them I added another cup or so of goose broth from the stock pot.

By the time the goose had spent 30 minutes in the hot oven, that liquid and the fat that the bird released had made a dark brown, very delicious sauce that I served with the goose and the stuffing I made. Separately, I also made a thickened gravy from the broth in the stock pot, using some goose fat to make a flour roux — no butter or cream in sight. 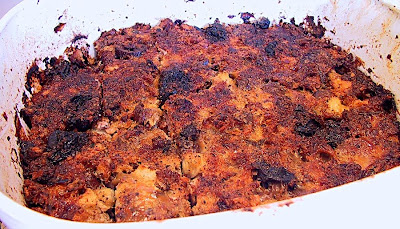 The stuffing, cooked separately, might more
appropriately be called "dressing."
What was the stuffing?

Mix the meat and all the dry ingredients together with the eggs. Put the stuffing into a baking dish so that it's not more than two inches (5 cm) deep. Spoon on the goose fat and then pour the broth over all. Set the pan in a hot oven and let it cook for 30 minutes or until completely cooked and browned. It's basically a savory cake. Slice and serve with the goose and the roasting juices or the flour gravy.

You can't really stuff the goose, because it won't be in the browning oven long enough to cook the sausage meat all the way through. Make it in a baking dish. The goose fat and broth will give it the flavor it needs. I think you could use walnuts or pecans in the place of the chestnuts.

There is of course a lot of goose left over after dinner, since there were just two of us eating it. I cut off the leg & thigh sections after roasting and put them in the freezer for later use. Our dog Callie will get most of the meat and skin from the wings (there's not very much meat on goose wings) and bits off the carcass, chopped and mixed with rice cooked in goose or chicken broth. We will have the breast meat that's left for lunch today and maybe again tomorrow, with leftover carrots, stuffing, and Brussels sprouts. 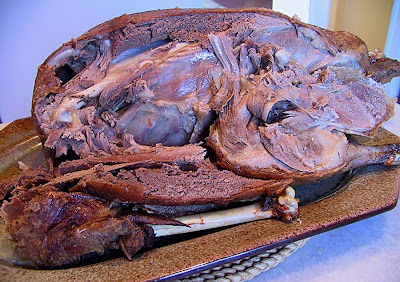 There is no white meat on a goose.
Is this what we call having "goose flesh"?
I ended up with about three quarts of goose broth, after boiling it down for a couple of hours to reduce the volume and concentrate the flavor. And I ended up with about two cups of goose fat — that's all. I was kind of disappointed. I wanted more. Maybe our goose was too young to have been really fattened up. All those warnings about the prodigious amounts of fat left over after roasting a goose just didn't apply in our case.

Do you think it could have something to do with the poaching?
Posted by Ken Broadhurst at 09:15