The classic moussaka is a kind of casserole or gratin of eggplant slices, ground or chopped lamb in a tomato sauce, and a sauce béchamel with cheese melted in it. You can make the same thing using zucchini slices if you don't have eggplant — ou simplement pour varier les plaisirs (just to do something different).

We had zucchini slices in the freezer that we grew in the vegetable garden. In fact, it was yellow summer squash. It was cut into disks that had been blanched in boiling salted water for a couple of minutes before going into the freezer. 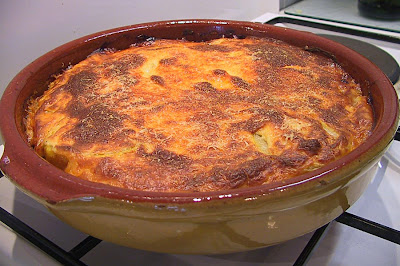 Zucchini moussaka
And we had the rest of the leg of lamb that we cooked on Thanksgiving Day. I cut it off the bone and cut the meat into ½-inch cubes. You could just as easily use ground lamb in this kind of recipe.

The first thing to do is to chop an onion (or two if they are small), a couple of cloves of garlic, and 6 or 8 mushrooms (cep stems are good — see yesterday's post). Sauté those in a skillet in oil or butter, and then add about 1½ lbs. of lamb. Season it with good pinches of dried thyme, allspice, nutmeg, cinnamon, black pepper, and of course salt. 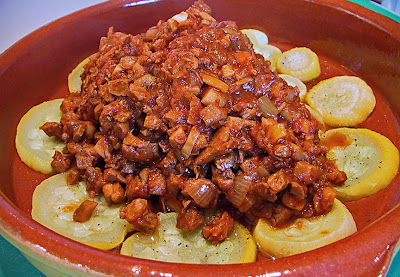 The lamb mixture over a layer of zucchini slices... 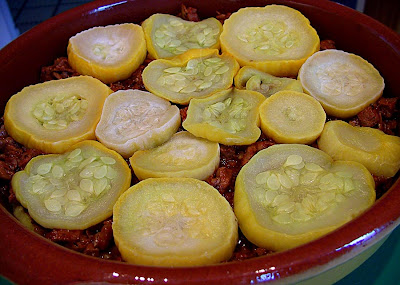 ...and another layer of zucchini slices over that
When the lamb is browned, add about ½ cup of tomato paste or very thick tomato sauce. Add water or white wine to moisten the mixture, without making it too soupy. If you have pan juices left over from roasting the leg of lamb, add some of those too (but not too much lamb fat). 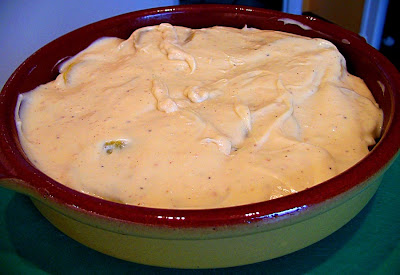 A thick cheese sauce is the top layer.
It will set up because there's an egg in it.
Separately, in a saucepan melt two tablespoons of butter. Sprinkle in two tablespoons of flour and let it cook in the butter for a minute or two. Then gradually add milk or cream until you have a smooth, thick béchamel sauce. Grate in some nutmeg (or add a pinch). And don't forget salt and pepper.

Into the sauce put about ¾ cup of grated cheese — Swiss, parmesan, or feta, for example. When it has melted into the sauce, take the pan off the heat. Let it cool for a few minutes, while you break one egg into a bowl and beat it. Then add a spoonful of the cheese sauce to the egg and whisk it in well. Now pour the egg mixture to the cheese sauce, stirring it energetically so that the egg will be incorporated but won't scramble.

Pour this thick cheese sauce over the top of the casserole and spread it around to cover all the zucchini slices. Put some more grated cheese on top if you want. Bake the casserole in a 350ºF/180ºC oven for at least 45 minutes, until it's golden brown on top. Let it cool slightly before you cut it or spoon it out onto plates.

Don't leave out the cinnamon, nutmeg, and allspice when you cook the meat. Those are the good flavors you want in moussaka. You can make it with beef, but lamb is better.
Posted by Ken Broadhurst at 08:00