We here in Saint-Aignan are not getting snow in the quantities that Washington, Baltimore, Philadelphia, and New York are getting this weekend, but it's plenty for us. It snowed again in the wee hours yesterday, and we had flurries all during the day. The temperature outside has stayed below freezing for days, and the house feels cold despite hot radiators and the wood fire. 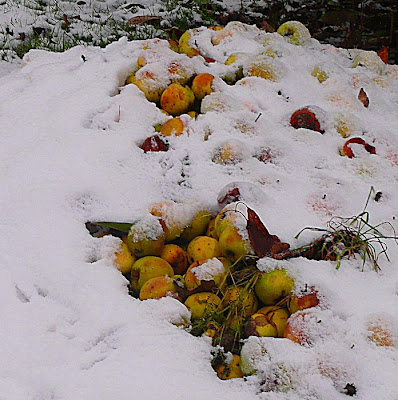 Apples in the snow
Houses here are just not built for this kind of frigid weather. The insulation isn't sufficient — in our house, there isn't much if any because it's built of concrete blocks and bricks that are simply plastered over on the inside. The temperature yesterday morning was nearly -7ºC/+20ºF. That's nothing compared to the cold they might have in Montréal or Chicagao, but then it's all in what you are used to and prepared for. 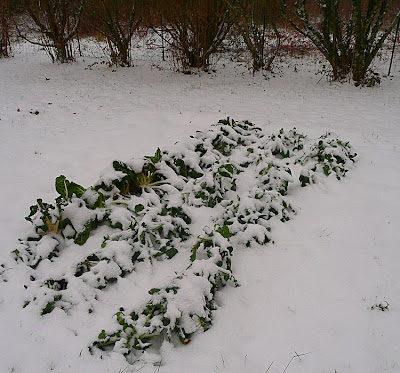 My "cabbage patch" is snow-covered, like everybody else's.
I remember a severe cold snap in San Francisco at Christmas many years ago. We lived in a top-floor apartment in a building downtown. With the outside temperature just below freezing — lows unheard of there — for two or three days we couldn't get the temperature in our apartment above 55ºF, even with the heat on full blast. We had to go to work to get warm. Here in Saint-Aignan, it's not quite that bad. The house gets up to 65 or 70. 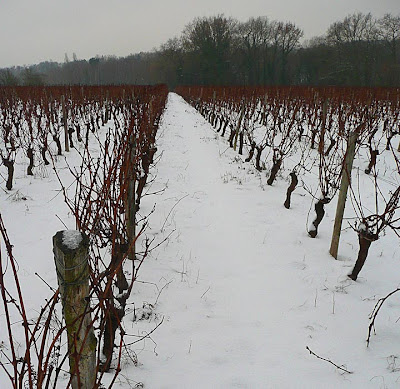 Walks in the vineyard, even in snow, are still nice.
Weather today in Saint-Aignan will be more snow. Not much, I hope, and it may start turning into rain by tonight or tomorrow. That will be a mess. If we can get out today and do some necessary shopping, we'll be set for another few days and won't have to deal with the muck and slickness outside. Well, we'll have to walk the dog, but we won't have to take the car out again until Thursday. That's when we'll go pick up our Christmas goose at the market in Saint-Aignan. 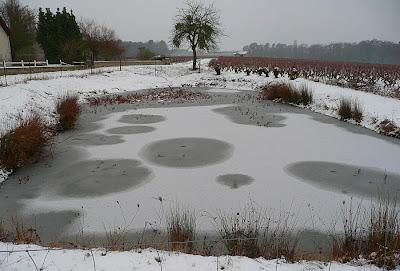 The pond has been frozen over for a few days now.
This morning we want to go to the market over in Noyers-sur-Cher, on the other side of the river. It's not much more than 5 miles from the house. I hope the vendors we want to buy things from will have showed up. Wish us luck getting back up the steep hill that leads up to our hamlet. 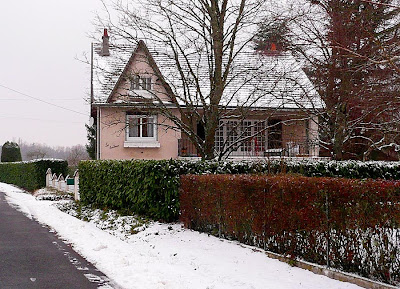 On Saturday the road was salted and sanded,
but then it snowed some more.
I just checked the MéteoFrance web site. The forecast is for light snow this morning, heavier snow this afternoon, and rain in the evening turning to snow again overnight. It's also gotten pretty windy. Doesn't that sound nice?
Posted by Ken Broadhurst at 07:21