Change in the weather

The weather in Saint-Aignan is changing just in time to sync up with the change of season that is only 10 days distant. It's been very wet but quite mild here for weeks and weeks now. Over the past few years, we had gotten used to having a much colder November.

Now, after the relative warmth of a lot of 60ºF afternoons, the weather reports are suddenly predicting snow, even down here at low altitudes — en plaine, as they say, not just en montagne. A big high pressure system will be sending us air and winds from Scandinavia and Russia. The maritime flow that brought us mild wet air off the Gulf Stream has been interrupted. 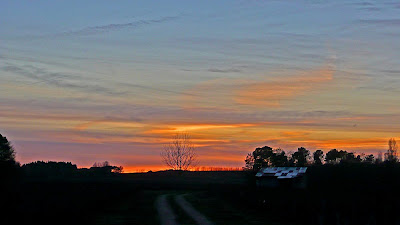 Sunset yesterday, 10 December 2009
You know how it is when you are waiting and waiting for something to happen and it just never does? That's been our autumn weather. Walt and I spent a lot of energy in early November bringing in plants, raking leaves to mulch our garden plots with, and otherwise getting ready for the first blasts of icy weather. Well, we haven't had a freeze at all yet, with the exception of a couple of mornings in October when there was light frost on the grass way out in the vineyard.

Western sky in December
Now I discover that I didn't actually finish the winterization process. I still have plants that need to be brought inside or otherwise protected from frostbite. There are pots of soil to be emptied so that freezing temperatures don't crack the pots. And we have plants around the house and farther out in the yard that still need the protection of a layer of dead leaves so that roots and bulbs won't freeze. I guess that's what I'll be working on today. 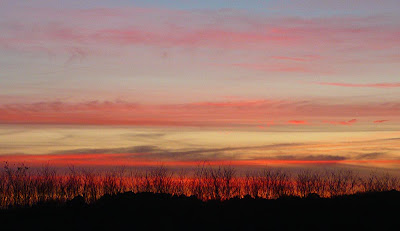 What we call "brush" is taking over an abandoned
parcel of vines far out in the vineyard.
It looks like a brush against the horizon.
Our weather is nothing far out of the ordinary, I guess, when I look at what's going on in parts of the U.S. where I used to live and still have friends and family. A day or two ago the temperature in my home town on the coast of North Carolina was above 70ºF. And in California, just east of Sacramento up in the Sierra foothills, they got 5" of snow earlier this week, according to a friend. That's very rare. 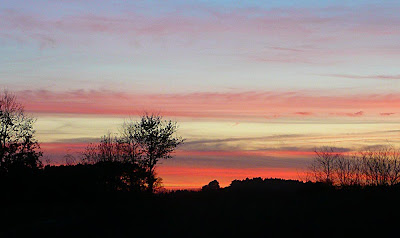 Out on the gravel road through the vineyard, late in the day
Our Saint-Aignan weather has been unusual only in that the mild November spell has lasted so long, and because we've gotten about 5" of rain during a time when 2" would feel like a lot. The ground seems completely saturated now.

For lunch, I'm going to make a raclette, a cold-weather dish about which I posted a topic a few days ago. Our high temperature today is supposed to be in the 40s. There's a dense fog hugging the ground this morning, and it's in the mid-30s. 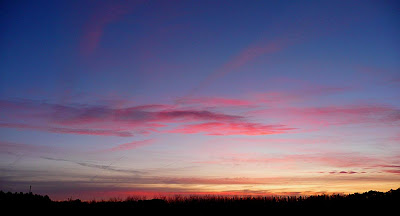 Red December skies
The other afternoon we went into Saint-Aignan to get a couple of things from a store called Gamm Vert, which sells gardening supplies, work and hunting clothes, and even wine and other seasonal food products, along with canning equipment like jars and funnels.

There we bought a 500 g bag of black peppercorns for just over three euros. That will last for a while. We buy black pepper in bulk because it keeps just fine and is much less expensive that way. I also picked up a brightly colored box of Epices Rabelais, a spice mix that I had never even heard of before. It was on a rack next to the cash register in the store, and the cashier said people buy it to use in making pâtés and terrines. 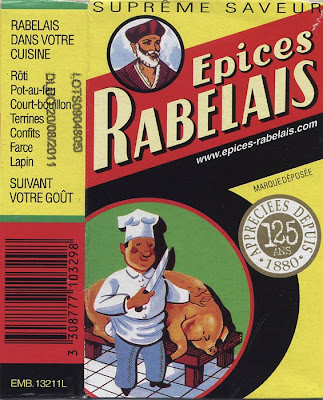 Epices Rabelais, "popular since 1880." Good for roasts, pot roasts,
court-bouillon, terrines, confits, stuffings, and rabbit stews.
That's a seasonal activity and takes place in the fall. You make pâtés that will carry you through the winter, and that you can enjoy during the holidays. You also make foods like confit de canard that you can store in your cellar during the cold months, alongside the apples, carrots, beets, potatoes, and onions you have harvested from your orchard and garden. It's cold enough in the cellar in wintertime so that even pâtés and canard confit don't spoil. Cabbages and leeks continue growing in the garden all through the winter, unless it gets extemely cold. 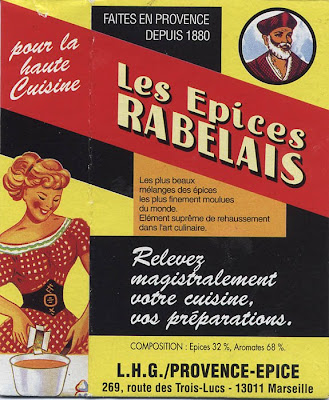 The composition of the spice blend is a closely guarded secret.
When you smell it, you can tell it contains a lot of cloves —
clous de girofle — a spice that cuts the gaminess of meats.
The supermarkets sell large quantities of these winter foodstuffs at low prices so that people can stock up for the winter even if they don't have an orchard or a vegetable garden themselves. I'm sure it's mostly older people, like me, who live and eat this way. The stores, including Gamm Vert, also sell black pepper and special items like the Rabelais spice mix for the same purpose: good pâtés and terrines need to be highly seasoned because you eat them cold.

Let me add that many if not most people here in Saint-Aignan also have freezers nowadays, as we do. But the cellar still plays a big role in preserving and enjoying local, seasonal food products. Some things just don't freeze well.
Posted by Ken Broadhurst at 07:27