Saint-Aignan, pop. 4,000, is home to about a dozen restaurants, including two pizzerias, a crêperie, and a Turkish shish-kebab place. Five "downtown" restaurants — operating in the old centre-ville — are full-service restaurants serving French food. 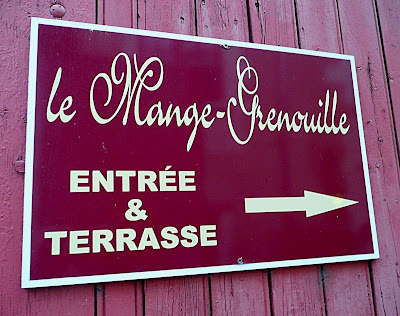 Saint-Aignan's most upscale restaurant these days is "The Frog Eater."
The most up-scale place is a relatively new restaurant called Le Mange-Grenouille — The Frog Eater. That's a pretty funny name. The menu does include one frog dish — Fricassée de grenouilles au beurre persillé (fricasseed frog legs in parsley butter) — but that's only one I see. Le Mange-Grenouille opened for business just three or four years ago, and it's nicely decorated. There is outdoor seating when the weather is nice. 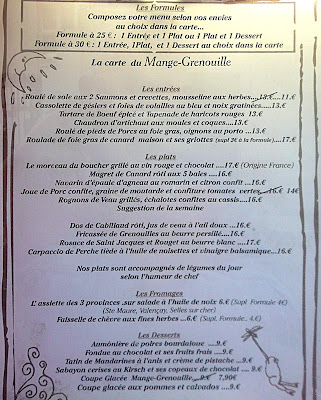 Here are Le Mange-Grenouille's à la carte choices.
Another Saint-Aignan restaurant is located on the main square, where the food market is set up on Saturday mornings, and is called Chez Constant. I've eaten there three times in just more than six years, including a lunch about two weeks ago. It's pretty good, but the food served there has never really knocked my socks off. 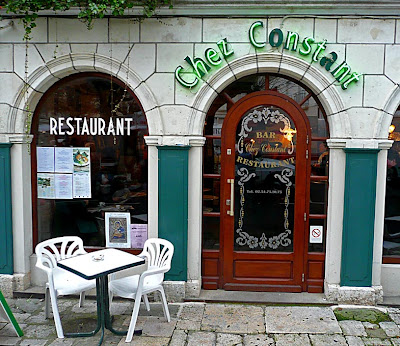 Chez Constant, on Saint-Aignan's main square. Notice the
outdoor table, with ashtray, even in December —because
smoking is now forbidden in all French restaurants and bars.
At lunch a couple of weeks ago, I had the daily special — partly because we were being treated to the meal and I didn't want to order anything expensive. The plat du jour was a lightly curried turkey sauté, with rice. I asked whether it was turkey white meat or dark meat, and the server said the morsel used for the dish was what is called the sot-l'y-laisse in French.

« Le sot-l'y-laisse » means, literally, "the fool leaves it there." It is the little "oyster" of meat near the bird's thigh, on the carcass. It's pronounced [soh-lee-less]. The fool leaves it there — in other words, ignores it or doesn't even know it exists. The irony is that it is the tenderest, most succulent morsel of meat on the bird. 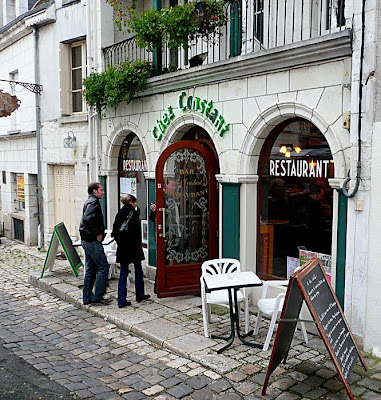 Chez Constant has a nice old bar in the front room
and a big dining room in the back.
Anyway, the curried turkey morsels were good but it was a dish I could easily make at home. I feel more and more that way about restaurant food these days. It's expensive and I can make the same food for a much lower cost at home. The main point of going to a restaurant is to spend time socializing with people whose company you enjoy. And of course restaurants are very useful when you are traveling.

So what's happening with restaurants and taxes in France? Until about six months ago, the value-added tax — VAT in English, TVA in French for Taxe sur la Valeur Ajoutée, the kind of sales tax you pay here in Europe — was something like 20% on restaurant food. Full-service restaurant food, that is. The VAT charged on fast food, like McDonald's hamburgers, was only 5.5%. I'm not sure why or how the discrepancy came about. 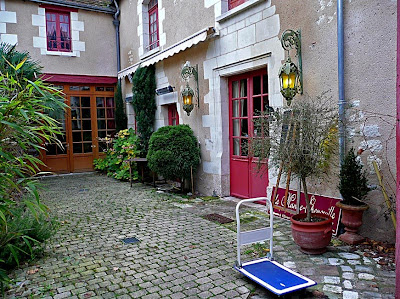 Le Mange-Grenouille's courtyard is set up
as an outdoor dining space in summer.
About 6 months ago, the French government — President Sarkozy took credit for it — decided to reduce the tax on "slow" restaurant food to 5.5% as a measure designed to lower prices for consumers. Restaurants were not required to lower their prices, but were encouraged to do so. Some restaurants said they would rather pay their employees better salaries, for example, with the extra money they would make by maintaining their prices and paying less in taxes.

Now the government has expressed its displeasure at the way restaurant owners have dealt with lower tax. Prices have not come down as much as it had hoped. Are owners just pocketing the profits? There is at least an implied threat that the VAT on restaurant food will be put back to the old, high level. It still seems like it would be fair to tax all kinds of restaurants at the same rates, doesn't it? 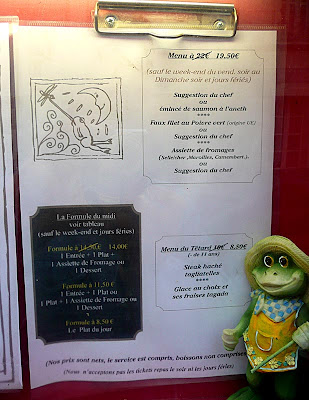 Le Mange-Grenouille's set-price menus —11.50 or 14.00 € at
noon, 19.50 € for dinner, with a children's menu for 8.80 €.
If you just have the plat du jour at lunch, it's 8.50 €.
Does the government want a policy that encourages people to eat in fast-food restaurants rather than full-service restaurants? I hope not. I know governments like Sarkozy's don't want to be seen as raising taxes, so maybe they thought that lowering taxes on traditional restaurants was the only way to level the playing field.

Bringing the tax rate on fast food up to the rate paid by other restaurants was probably not ever in the cards, but maybe a compromise rate could have been found. What about 10% or 12% on all restaurant food?

Whether it was intended or not, you can see how consumers might think that full-service restaurant owners and operators are trying to get away with something. They are paying lower taxes now, but not lowering prices. Are they gouging the consumer? At the same time, the big fast-food chains are unsullied — they haven't had to make any changes.

All this can't be good for the traditional French restaurant business. Whether by design or inadvertently, the government appears to be encouraging the growth of the fast-food industry in France. That's too bad.
Posted by Ken Broadhurst at 07:17