A Blanquette with boiled biscuits

I realized yesterday that the Southern U.S. classic dish called Chicken and Dumplings is just an American version of Blanquette (de veau, d'agneau, de poulet, etc.) in disguise. The disguise is the American name. The rest is the same, except people don't really eat veal or lamb much in the American South.

The element that is different in Chicken and Dumplings compared to a French Blanquette is, well, the dumplings. The Robert-Collins dictionary says "dumpling" is translated as
« boulette (de pâte) ». I think it is also translated as
« quenelle » — as in « quenelles de brochet », or fish dumplings. 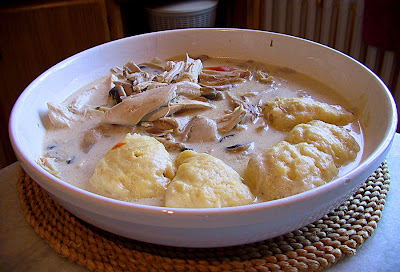 Blanquette de poulet, a.k.a. Chicken and dumplings
Except for those, Chicken 'n' Dumplings is the same thing. Here's how you make it.

Take a whole chicken and poach it in a big pot, in enough water to cover it completely. For flavor, add a couple of carrots, two or three medium onions, a couple of celery stalks, some black peppercorns, a couple of bay leaves, and some salt to the water. Get the water up to boiling before putting the chicken in the pot.

For a Blanquette de Veau — White Veal Stew — you do the same thing. Well, if you want to, you can start the veal (or chicken) cooking in cold water. And you can add a lot of dry white wine to the water if you want. Actually, I put about half a bottle of dry white wine into the liquid I cooked my chicken in. I'm not sure that's very Southern, but I am sure that it's very good. 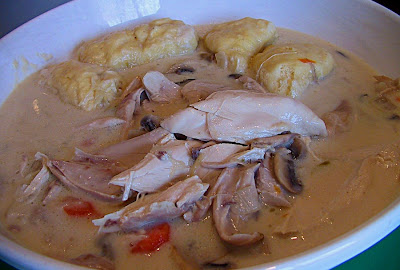 Boned-out chicken and Southern-style dumplings
Let the chicken cook in the liquid at a low simmer for about 90 minutes. Then take it out of the liquid and let it cool to the point where you can stand to touch it. With your fingers, remove all the chicken meat from the bones, putting the skin and cartilage aside with the bones. If you have a dog or cat, all that skin and cartilage, with some cooked rice, will make very good pet food. Discard the bones.

Strain the broth — the water or water & wine mixture is now chicken broth — into a bowl. You can put the carrots, celery, and onion into the stew if you want, but discard the bay leaves and peppercorns at this point. Cut the carrots, celery, and onions into small pieces if you haven't already done so and if you want to add them. Otherwise, throw them out. They've given their flavor but vegetable fiber is not a bad thing to eat, apparently. In a pot, make a roux with two tablespoons of butter, melted, and two tablespoons of flour. When the flour has cooked in the butter for two or three minutes, start adding broth, using a ladle. With each ladle of broth, stir the sauce over medium heat until it gets smooth and creamy. Continue until you have put in about two quarts (or liters) of broth. The sauce should be slightly thickened, but not gloppy — about as thick as heavy cream.

At this point add the carrots, celery, and onions to the broth along with half a pound of cleaned, sliced, raw button mushrooms. Now, Southern Chicken and Dumplings doesn't normally have mushrooms in it, but French Blanquette does. This is my major concession to good French cooking technique when making a Southern dish. (The wite wine is a minor concession.) If you don't want the mushrooms, leave them out.

Cook the sauce for about 15 minutes or until the mushrooms seem done. At this point, add all the chicken meat to the broth and let it start simmering again. Also add about ¾ cup of heavy cream. Stir it to blend it all together. If you want, you can add a cup of frozen or fresh green garden peas at this point. They're optional, but traditional in the South. 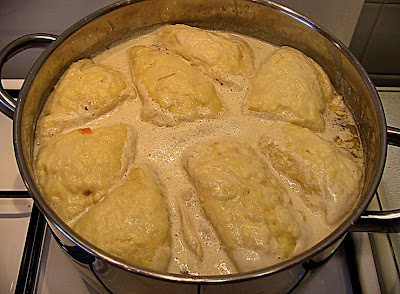 The dumplings cook on top of the slightly thickened cooking liquid.
Meanwhile, make a batch of baking-powder biscuits following Tom's recipe here. You're going to cook them in liquid, not in the oven.

When the pot of chicken is simmering and the mushrooms look cooked, add the juice of half a small lemon to the sauce and stir it in. That really perks it up. Then cut the biscuit dough into pieces, about eight of them, and add them all to the pot. They will float on top of the liquid and cook. Turn the heat down low and cover the pot so that the dumplings will steam through and puff up. 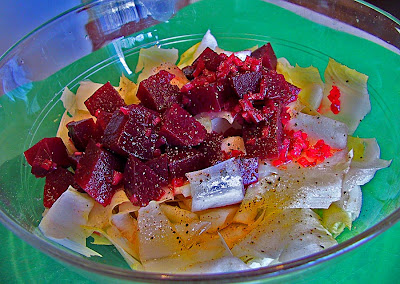 How about a salad of Belgian endive with diced red beets?
Voilà. After about 15 minutes, you have tender, fluffy dumplings to enjoy with the creamy chicken-broth sauce and the nice, boneless chicken meat. The dumplings replace the rice you would have with a French Blanquette. If you prefer rice, don't make the dumplings at all and call it Blanquette de Poulet. Or have pasta with it. That's good too. All you need is a salad to finish it off.

What about the same kind of stew made without chicken but with turnips, parsnips, carrots, and celery root. That would be a Blanquette de Légumes.
Posted by Ken Broadhurst at 07:29