A goose, and some root vegetables

We succeeded in ordering a goose for Christmas. Je ne recule devant rien — I'm pretty fearless when it comes to the kitchen. I'm going to cook it in our little oven, no matter what. More about that later, as the time approaches. Meanwhile, we'll go pick up and pay for the goose — the French word is oie [WAH], and it's feminine, so it's l'oie [LWAH] or une oie — on December 24. There's a special Christmas market that day.

It was cold yesterday morning, and gray. Thankfully, there wasn't much wind. Saint-Aignan was crowded and all the activity, all the colors, all the sounds of the market made it seem warm despite all. We first stopped at one poultry vendor's stall and asked him if we could buy a goose for Christmas dinner. « Il faut la commander », he shouted — "You'll have to order it." He sort of waved us away, as if we were bothering him. He was busy cleaning a chicken, I have to say — gutting it and burning off the few feathers still attached to the carcass.

I walked away, saying we would reflect on it, but immediately decided to go back over to ask him about the price. How much would the goose cost, by the kilo? He shrugged and said he couldn't really tell me. Maybe about 10 euros a kilo. « Les producteurs n'en vendent qu'à une seule époque de l'année », he said, or something like that, « et c'est à eux de nous dire le prix. » "People who raise geese only sell them at a certain time of year" — that would be à Noël — "and they're the ones who set the price."

That didn't sound very promising to me. We walked on over the the second poultry stand, which is the one I actually prefer doing business with. And there they had a price list posted on top of the glass-fronted refrigerated cabinet full of ducks, chickens, rabbits, turkeys, and... geese. They were selling the Christmas goose at 8.50 €/kg. I ordered one from them. 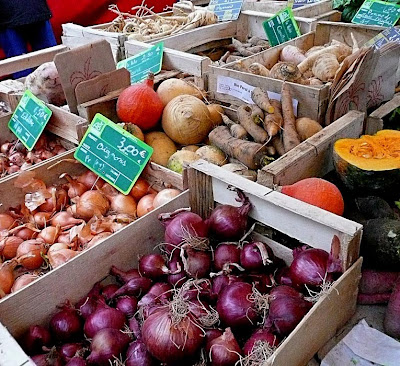 Onions and shallots, yellow carrots, yellow Boule d'or turnips,
and parsley roots that you cook like turnips or parsnips
On the way from one vendor to another, a big display of what really looked like farm-fresh root vegetables caught my eye. We still have some of the white sauce left from the Chicken and Dumplings we made the other day. I'm sure there's some chicken meat left in it, and there are some carrots and mushrooms. I thought it might be good to have a sort of vegetable version of the dish for lunch today — une blanquette de légumes — using some of those root vegetables.

They had parsnips. I remember just a few years ago that you never found parsnips around Saint-Aignan. They're very popular in England, but in France they long ago fell into the category called « les légumes oubliés » — "the forgotten vegetables." That category included Jerusalem artichokes, pumpkins, butternut and other winter squashes, and even broccoli, until not that many years ago. 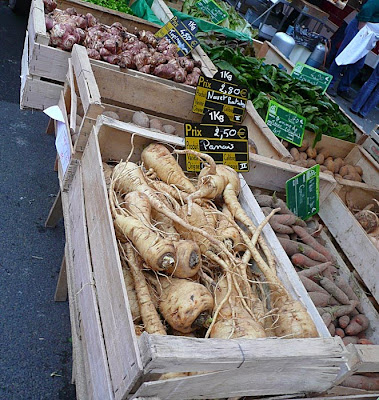 Parsnips, carrots covered in sand, little turnips, potatoes,
Jerusalem artichokes, fresh spinach, and lettuce
Now you find all those vegetables at the markets and even in the supermarkets. Remember, a lot of the produce sold at stalls in open-air markets in France actually comes from the wholesale food suppliers that operate out of Rungis, the huge distribution center just south of Paris. I think I can often tell the difference between the locally produced vegetables and the ones that are shipped in. They are more rustic looking, less prettily arranged for display. 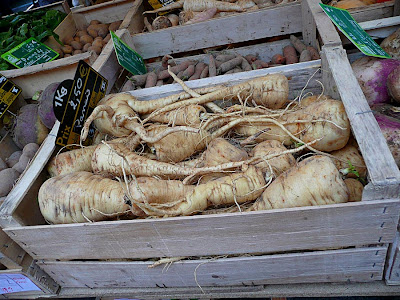 Here's a better picture of the parsnips (panais in French).

In fact, the vegetables and fruits from Rungis include things like avocados, lemons, oranges, green beans, and other fruits and vegetables that are not local and not even of the season. This stand, however, had nothing but produce that is in season here, now. I guess I should have asked the people running it where it was all grown, but I was too surprised at the variety of vegetables to think about that.

What are those? What are these? And these? I kept seeing unfamiliar veggies alongside more familiar ones. I knew what the parsnips were, but there was a crate of something that very closely resembled them right behind them. Those turned out to be not smoother, smaller parsnips, but parsley roots. 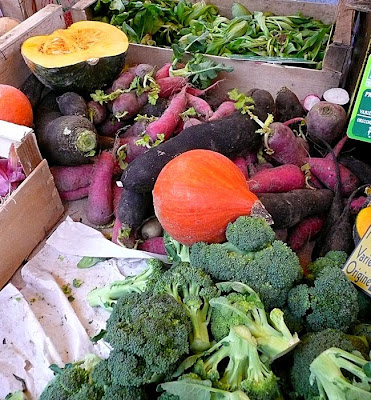 Broccoli, little pumpkins, and both black and long red radishes
And those big yellowish globes, are they rutabagas? No, the rutabagas are over there — these are yellow turnips, des navets « Boule d'or ». They have a slightly sweeter taste, with a touch of bitterness, the man said.

Are these carrots? Yes, they are yellow carrots. And these, are they red carrots? No, they are radishes. I had recognized the big black radishes — they're very good — but I had never seen carrot-shaped red radishes before. 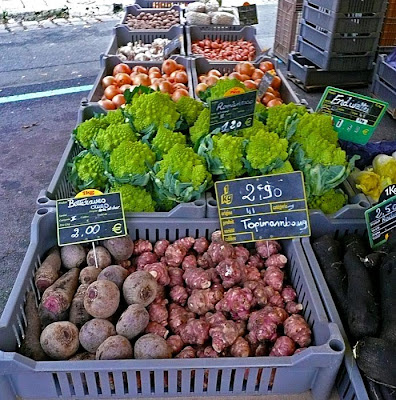 Another vendor had raw beets — in France, you usually find them
already cooked — along with Jerusalem artichokes and
romanesco, which looks like radioactive cauliflower
I got a couple of parsnips, a big turnip, and some long red radishes. They'll supplement the carrots and potatoes we already had in the fridge to make a white vegetable stew for lunchtime today. More about the goose tomorrow.
Posted by Ken Broadhurst at 07:17