The first setback was the announcement that our water would be turned off at 8 a.m. yesterday. A water main burst, and much digging and repairing had to be done. I was able to make some coffee and get a shower before 8 o'clock, but here I am typing this between 5 and 6 p.m. and we still don't have any water flowing. No flushing. No bathing. No cooking. Now I have to run to the store and buy 2 or 3 gallons of water for this evening and tomorrow morning, since it's unlikely the water will be turned back on today.


And then, when I went out to go do some shopping, the warning light came on in the car. There it was on the instrument cluster: something that looked like a tire seen in profile from the front. And it was flat. So I came back inside, got on the internet, and found the owner's manual for the car, which was not to be seen in the glove compartment. It said one of the tires needed to be pumped up, but it didn't say which one.


I went out at 9:30 and drove around to find a gas station that had a working air pump, and preferably one that didn't cost more than 50 cents. I only had two quarters. I finally found such a pump at the gas station near Walmart, and it only cost a quarter. Problem was, it didn't work.


So I drove over to an Exxon station with a Handy Mart convenience store attached. There I could get some more quarters. I pumped up all four tires, and all seemed well. It cost 6 bits (three quarters). At that point, I drove over to the gas pumps to fill up the fuel tank. With a full tank, I turned around to get back behind the wheel and immediately saw that the front tire on the drivers side was almost completely flat. I could hear air hissing out of the tire valve. By then it was noon. 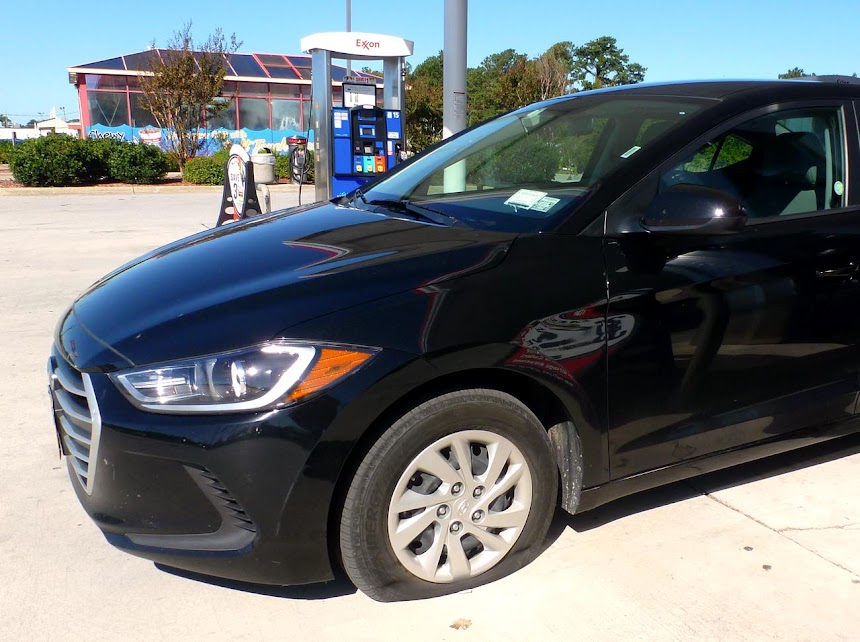 I don't have a cell phone here. Luckily the woman at the register in the Handy Mart store was very helpful. She let me use her cordless phone to call the rental car office about three miles up the road. (It seems there are no coin-operated phones any more.) She let me use her phone again to call the rental company's roadside assistance number (1-800...). She let me use her phone again to call my mother to tell her I'd be late for lunch and why. She let me take the cordless phone out to my car, marooned at the pump, to get the rental contract out of the glove compartment. She then agreed to receive a subsequent call from the roadside assistance line telling me who would be coming to repair the tire and how long I would have to wait.


The repairman showed up about 30 minutes later. He quickly changed the tire, putting on the little "doughnut" spare tire in place of the flat. He told me I needed to go to the rental office, where they'd surely exchange the doughnut-tired car for one with a full set of refull-size tires. No luck there, though. We don't have any cars available today, I was told. "Zero cars." You need to drive 35 miles to New Bern, where the rental counter at the airport should be able to take care of the car exchange.


So I went and picked up my mother and we headed for New Bern at 45 mph, which was the speed the doughnut tire was rated for. We had another errand to run in New Bern anyway. At the airport, the rental agent quickly and efficiently processed the exchange and took me out to inspect the replacement vehicle. (She asked: Is there anything you need to get out of the disabled car? Just my 87-year-old mother, I said.) The disabled car was what they call a "standard compact" but the replacement car is a much more luxurious hybrid vehicle. It took me a minute or two to figure out how to get it started (it's keyless) and how to shift gears (there's a round knob for that). I like it. I think.


Now it was getting close to 3 o'clock. My mother and I went and ate some lunch in a restaurant, and then we went to the office where she had some business to take care of. Office was closed for the afternoon. Figures, doesn't it? We drove back home, where we found out we were still high and dry — sans running water. What a day! Busy for hours, but nothing really accomplished.

P.S. 6:15 p.m. I just ran out to the grocery store to buy three gallons of drinking water. When I came back into the apartment, I found that the overhead light in the kitchen no longer works. So we are high and dry and in the dark.