Au revoir means "until next time" — not adieu, meaning "good-bye forever." Tuesday morning, my plane took off about 30 minutes late. The Delta Airlines pilot came on the intercom and explained that because of bad weather in Raleigh NC, where I was headed, he had two choices: Leave later than planned to give the bad weather time to move on before we were landed on the other side of the Atlantic Ocean, or off-load some passengers and baggage before takeoff so he could take on more fuel be sure to have enough to either circle the Raleigh-Durham airport as long as necessary before landing, or fly on — diverted — to a different airport. I thought it was a little odd to hear that, and not especially reassuring.

Then we taxied out to the runway and had to wait even longer because an Air France plane taking off just before us had collided with a bird or flock of birds and maintenance crews had to be given time to go out and clean up the bird debris. Again, what an odd thing to tell us. Oh well. They are fastidious, those airport maintenance crews. 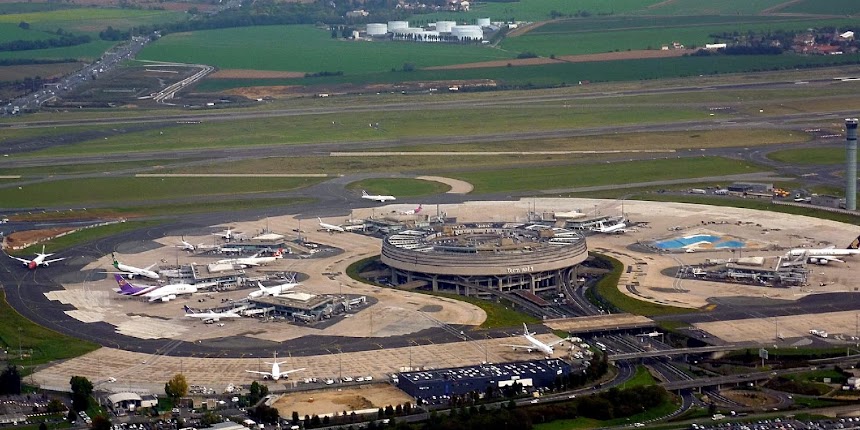 When we finally did take off, I could see the older terminal at CDG airport out the window. It's the round building in the photo above, and it was ultra-modern when it was built in the early 1970s. It's the terminal with giant conveyor belts inside glass tubes that carry passengers up and down through the middle of the circle between the departures and arrivals levels. It used to be called an aérogare — Aérogare numéro un — but they seem to have stopped using that term in favor of the more international terminal [tehr-mee-nahl]. I think I preferred aérogare. "Terminal" sounds so, well... terminal.
Posted by Ken Broadhurst at 06:30