Daube [DOHB] is derived from a Provençal and/or Italian word that meant "seasoned" or "spiced" — that's according to the Robert dictionary of the French language. I wouldn't be surprised if there were a linguistic link between the Provençal French term daube and the Mexican Spanish term adobo. A daube de bœuf or bœuf en daube is a kind of beef stew cooked à l'étouffée — cooked slowly in a tightly covered dish for several hours.


As the etymology of the term indicates, the daube is a southern French specialty. Other regions might cook beef or other meats the same way and call the stew une estouffade, which also means à l'etouffée. If you know about Louisiana cooking, you know that term. One translation is "smothered". Bœuf bourguignon is another example of an estouffade,and I've seen it called that in Paris restaurants. 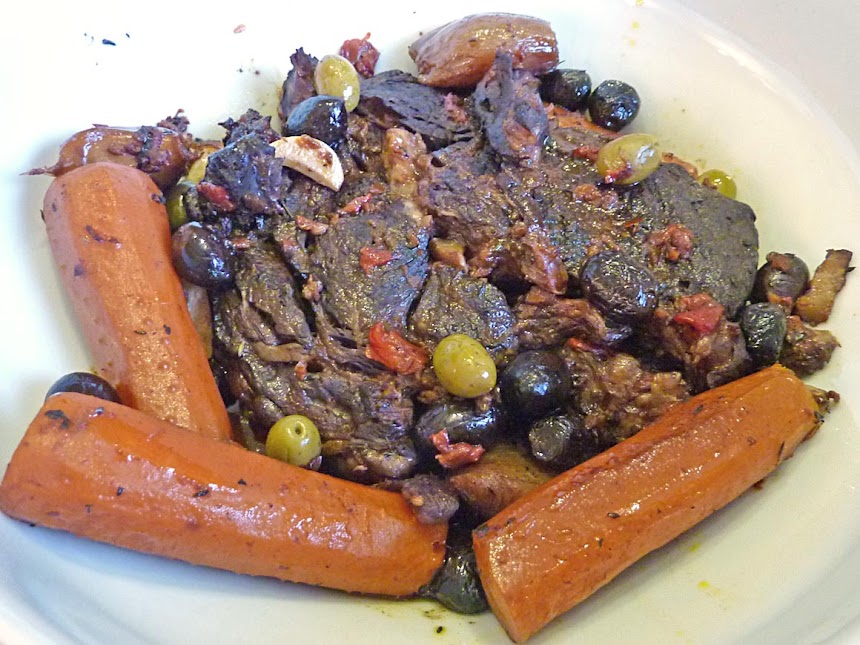 
I made bœuf en daube in the slow cooker yesterday. I put an 800 gram piece of basse-côte de bœuf (a chuck roast) in the cooker the night before, with a couple of carrots and a couple of whole shallots, a big clove of garlic, and some orange and lemon peel. Those are the main ingredients, along with red wine and tomato sauce (or whole tomatoes, which will be sauce by the time the cooking is finished).


I set the timer so that the cooker would start at 4 a.m. and go off again at 8. In other words, the beef marinated overnight before the cooking started. Oh, and I had browned the beef in a skillet beforehand. When I got up, I checked the meat and judged its doneness. Well, it ended up cooking for another 4 hours — 8 hours in all, mostly on the low temperature setting. The carrots and shallots held up well to that amount of cooking. Toward the end, I put a handful of olives into the pot to plump up and give their flavor to the cooking liquid. Olives are a typically Provençal ingredient, of course.


Speaking of the liquid, in the fridge I happened to have some red wine that I had spiced up and cooked for a different recipe. I had poured a whole bottle of red wine into a saucepan with a sprig of thyme, a couple of bay leaves, an onion, some lemon and orange peel, some black peppercorns, cloves, and what all. I strained that and used 1½ cups of the spiced wine with equal quantities of tomato sauce and beef broth to cook the daube.


Here's a recipe. I'm not sure where I found it or when. The original is in French. I'm translating: 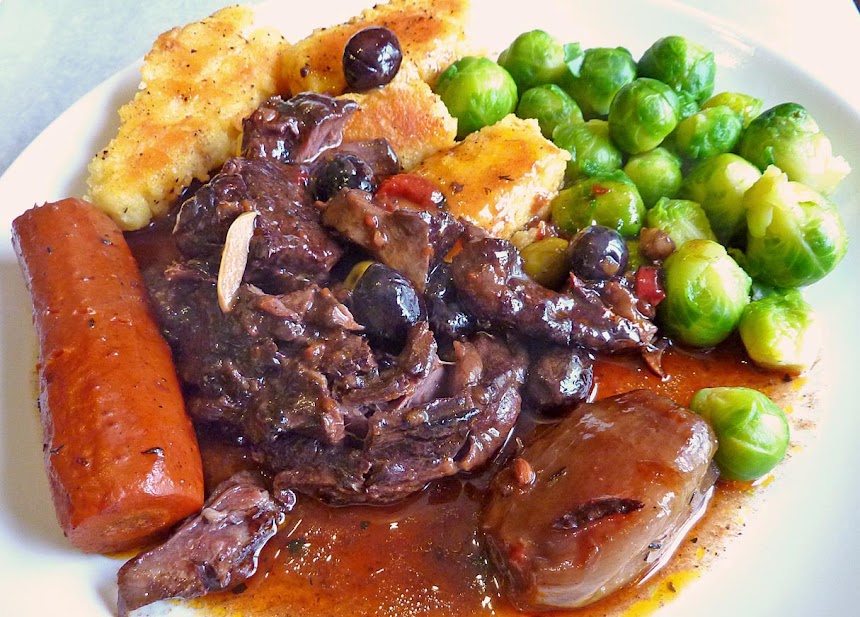 2 lbs. of chuck or other stew beef, browned
1½ cups red wine
1½ cups tomato sauce
1½ cups beef broth (a bouillon cube in water will do)
4 cloves (or allspice berries)
2 strips of lemon peel and 2 strips of orange peel
3 onions (or shallots)
2 carrots
3 cloves of garlic
1 sprig of thyme
3 bay leaves
12 black peppercorns
15 or 20 olives (pitted or not)

Put the beef in the cooker and pour on the liquids. Add the spices and herbs (or cook them first in the red wine and then strain them out to make a neater sauce). Add the carrots, garlic, and onions or shallots. Let the beef marinate for 6 or 8 hours.


Turn the cooker on at low temperature and let the beef and vegetables cook for 6 to 8 hours. Toward the end, add the olives and let them cook for 30 to 60 minutes so they they swell up and give their flavor to the sauce. Salt the sauce at the end, after tasting it — the beef bouillon, tomato sauce, and olives are all salty, so be careful with the table salt.


You can thicken the cooking liquid at the end by boiling it down in a pot on top of the stove after taking out all the other ingredients, or by using a slurry of water and potato starch or a flour roux. Serve the daube with rice, pasta, or potatoes, along with a green vegetable or salad.