Shepherd's pie with a difference

We cooked a leg of lamb last week. If you are American, you'll realize that last week was Thanksgiving. Walt and I have been cooking lamb instead of turkey for that holiday for twenty years now. Anyway, it's not easy to find a whole turkey to roast in late November in France. At Christmastime, yes, but not at Thanksgiving, which is not a holiday here. 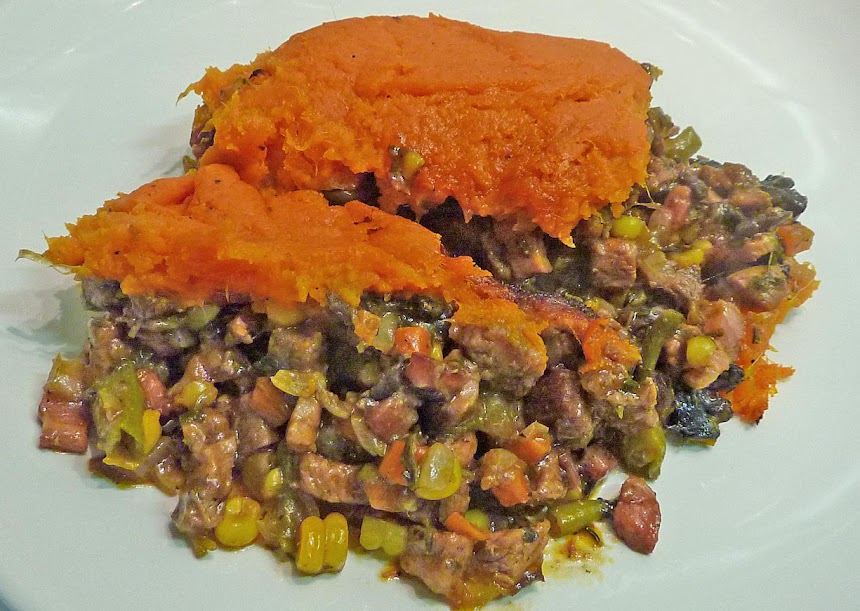 Anyway, there were leftovers, just as there would have been with a big turkey. The gigot d'agneau weighed in at 3.4 kg, or 7½ lbs. It cost us 53 euros ($66 at today's exchange rate) We got it from a very good butcher down in Saint-Aignan. It seems expensive, but we are this extravagant only on Thanksgiving. And the fact is, so far we have had at least 10 large servings out of the gigot. As leftovers, for example, we've had cold rare lamb slices with home-made mayonnaise and boiled potatoes; spicy, tender barbecued lamb with beans and rice; and now shepherd's pie. There are two servings of the shepherd's pie left to go — we'll have those in a day or two. 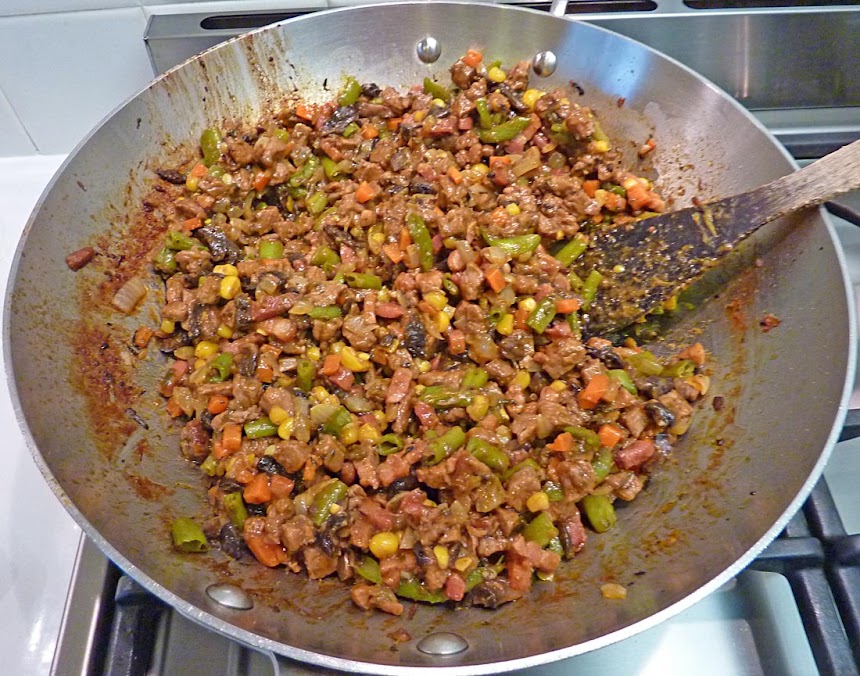 Yesterday I cut the last of the meat off the lamb bone. I trimmed off the fat and gristle (Callie will love those pieces) and cut the lean meat into fine dice. It came to about 600 grams. I added 200 grams of smoked pork lardons (bacon) along with a diced onion, a diced carrot, and some chopped mushrooms, not to mention a good handful of corn kernels and about the same amount of diced up green beans. 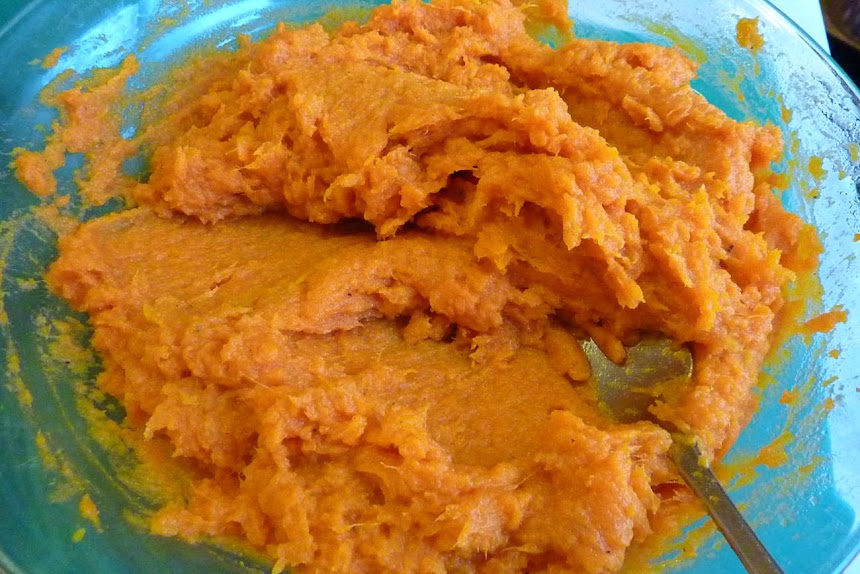 Mashed sweet potato for a spicy shepherd's pie
My plan was to make the shepherd's pie not with mashed potatoes but with polenta — I've made it that way before and the polenta (grits, but yellow grits, not white) makes a nice change from potato. You could use white grits if you wanted to, but you need to season them well and cook the corn grits to the consistency of fairly thick mashed potatoes. Here's a link to a good recipe (with potatoes) that I used as a guide — Alton Brown's Shepherd's Pie. 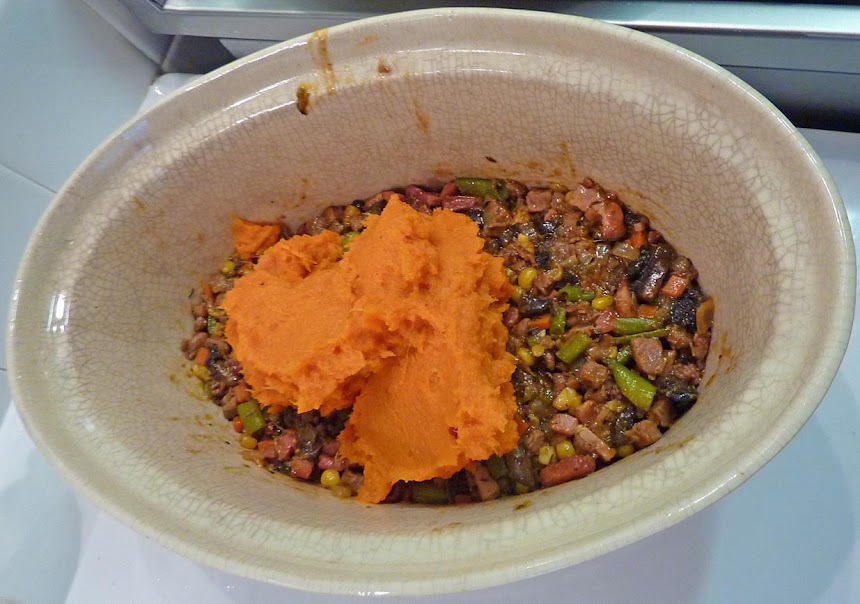 At the last minute, after I had prepared the lamb and vegetable mixture for the pie, I remembered that I had four medium-sized sweet potatoes down in the cold pantry. I hadn't started cooking the polenta yet, and I decided to make the shepherd's pie with mashed sweet potato instead. The potatoes cooked in the microwave in about 20 minutes time, and then I mashed them with some butter and just a hint of spice (cinnamon, nutmeg, allspice, black pepper, salt). 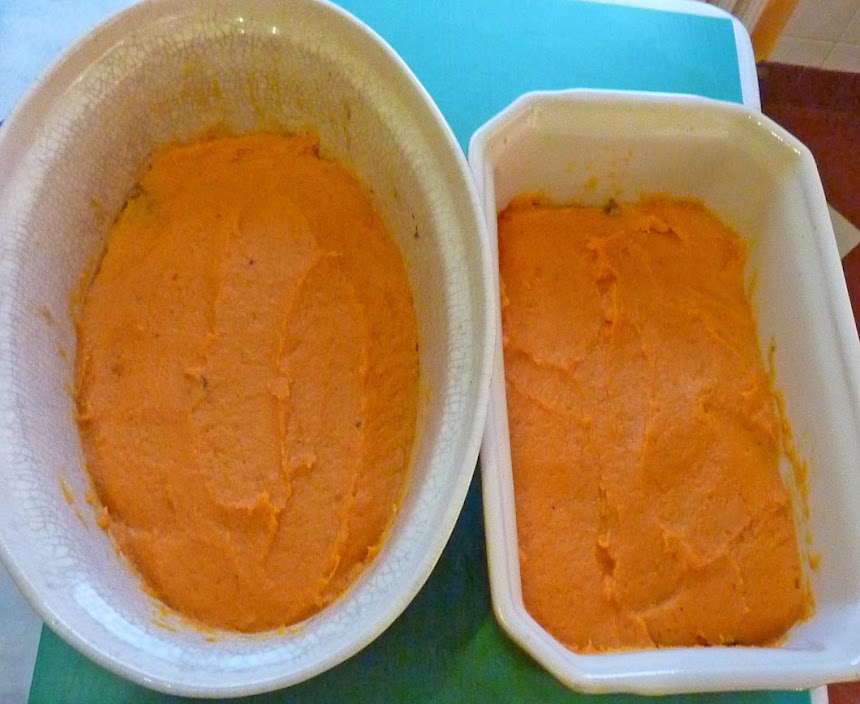 Because the sweet potato is, well, sweet — sweeter than mashed potato or polenta — I spiced up the meat and vegetable filling with a little harissa (a chili pepper paste) and some tabasco. It was just a matter of experimenting and tasting until I thought the "pokiness" (a new word for me) of the mixture was right. It needed to have good heat to complement the sweetness of the sweet orange sweet potato pulp. 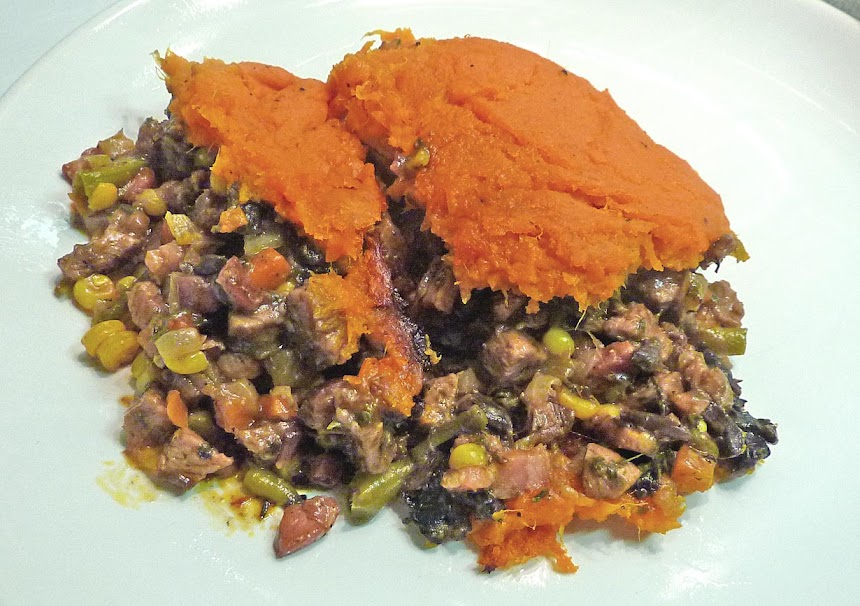