"Gobble gobble" is what the turkey says. The verb "gobble" also means "to devour", as in "I gobbled it up" or "I gobbled it down". Yesterday, there was more human-style gobbling going on around here than turkey gobbling. 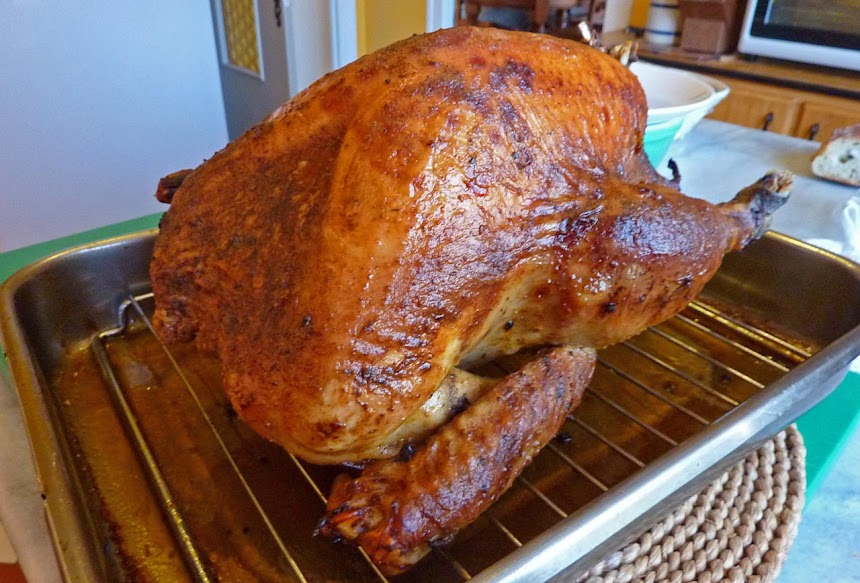 As it happens, I had a brilliant idea about this year's Christmas turkey — something I'll do again. A few days ago, Walt and I made a batch of Cajun-style chicken wings. That involves oven-roasting the wings, which are dusted with flour or corn meal, and then tossing them, after they're cooked and crusty, in a sauce composed of melted butter and Louisiana hot sauce.


As I was lying in bed awake early Christmas morning, having poached the turkey the day before, this thought occurred to me: Why not brush a glaze of melted butter and hot red pepper sauce on the skin of the bird before putting it in the oven, to make the turkey more perky? That's what I did, and It turned out great. The hot sauce is not at all overpowering, and it gives just a hint of heat to enliven the bland turkey meat.


Below is a photo of the cornbread dressing we made to have along with the turkey, Brussels sprouts, and baked potimarron (winter squash). I don't know if other people make bread stuffings like the ones we almost always have with roasted turkey in the U.S. at Thanksgiving or Christmas (or both). It's basically a savory bread (and butter) pudding. 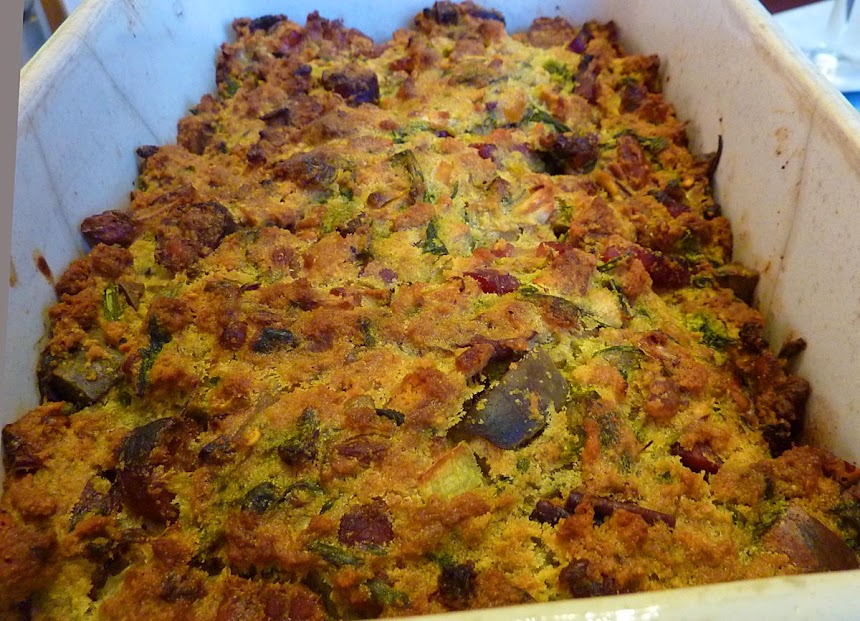 Bread stuffing is made by lightly cooking diced onion and celery, lardons or sausage meat, and chopped turkey giblets (liver, gizzard, neck meat), with herbs (sage, hot red pepper flakes) and spices (cloves, cumin, etc.) in a good amount of butter until everything is done and tender. Then you add a large amount of cubed, slightly stale bread (wheat, corn, or whatever other bread you like) to the buttery mixture and toss it well. Add a couple of beaten eggs as a binder. Moisten the mixture with some turkey broth and bake it in a pan alongside the turkey (then it's called "dressing"), or stuff it into the two cavities of the bird (to make "stuffing"). (You can find many recipes for bread stuffings on the 'net.)
Posted by Ken Broadhurst at 07:45