Shopping in the Blois 'burbs

I don't have much to blog about today. But you know me — that's never stopped me before! So here goes.
Yesterday's shopping trip to Blois was a success. It's a 40-minute drive though it's only about 25 miles. The most direct road runs through the middle of a string of villages and small towns: Saint-Aignan-sur-Cher, Noyers-sur-Cher, Saint-Romain-sur-Cher, Couddes, Contres, Cormeray, and Cellettes. The shopping center, with an Auchan hypermarket as its "anchor" store, is partly in Saint-Gervais-la-Forêt and partly in Vineuil, both south suburbs of Blois. Can you pronounce all those names?
At Auchan, which is a big new store with a shopping mall attached (maybe two dozen shops), we found some pinces à escargots, which we had been looking for, but we didn't fine a plat pour escargots in which to cook the snails and which we've also been looking for. I have three dozen snails in the freezer — I put them in there, they didn't just crawl in (ha ha ha) — and we bought some disposable aluminum-foil snail dishes a few days ago. They'll have to do. Now we are equipped and we can have another appetizer escargots à la bouguignonne with our dîner one day soon.
We also bought some flour and corn tortillas so that we can make tacos or burritos with some of the pulled pork I cooked and put in the freezer last week. We looked for a bag or box of dried black beans, but with no luck. We got a new throw rug for the kitchen. Some gallon-size zip-top plastic bags. Two huge sweet potatoes for 1€/kilogram. I think the sign said the patates douces were imported from the U.S. — they were probably grown in North Carolina. All this is very exotic stuff when you live in the country outside Saint-Aignan.
Then we went to the big Intersport sporting good store, which is right across the parking lot from the Maître Kanter sauerkraut restaurant where CHM and I had a good lunch last summer (I believe it was last summer). I had browsed Intersport's line of hiking boots on the company's web site beforehand and had tentatively picked out the boots I was interested in. Of course, they didn't have those. The salesman (who was about 13 years old, I think) said they only had fin de séries ("discontinued" lines) shoes and boots right now, and that they would receive a shipment of the new lines in February. 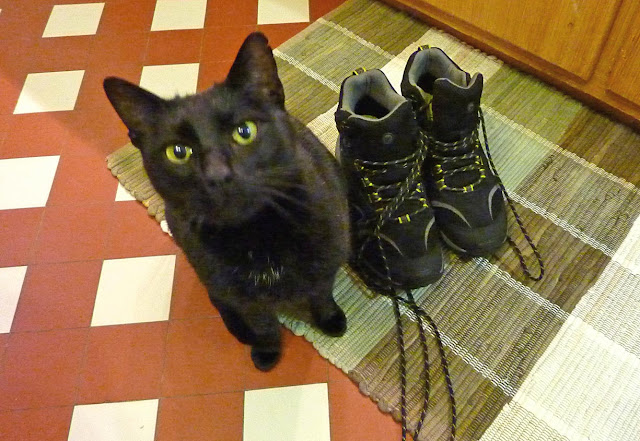 Bertie the black cat couldn't figure out what I was doing with the camera.
I was disappointed but I had a look at the discontinued boots, which were heavily discounted. There were only two or three pairs in my size. I tried one of those pairs on, and then I tried on a couple of promising pairs at the next largest size, where there were four or five pairs. Those were too big. After much trying on and walking around, and detailed discussion with the teenage clerk, I made a decision. I absolutely have to have waterproof shoes or boots right now for walks with Callie, and I can't do much long walking on gravel and through muck in my waterproof but low-top gardening shoes. The pair of boots I finally chose were priced at 120€ (at about $160, pretty expensive IMO) but with a 40% mark-down. So for 72€ I can hike again through the muddy vineyard, fearless. 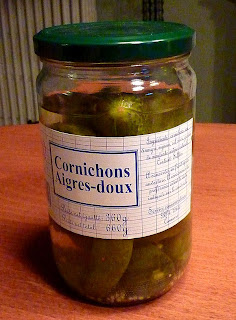 At that point, we high-tailed it back to Saint-Aignan, under a fine but heavy drizzle and leaden gray skies, for a lunch of raclette and green salad.