I've been reading about shanks and hocks. They're the same thing, I gather. The term "hock" is applied mostly to pork shanks, and the full term is "ham hock." In French, that's either jarret de porc (shank) or jambonneau (hock).


The term shank applied to jarrets or jambonneaux seems to be more American than British. What we call veal "shank" in the U.S. might be called "shin" or "knuckle" of veal in Great Britain. I can't affirm that as truth or fact, but that's what I see in the Collins-Robert dictionary. It also translates jambonneau, which I'd call "ham hock," as "knuckle of  ham." Never mind that it's more accurately the ankle of the animal than an actual knuckle. 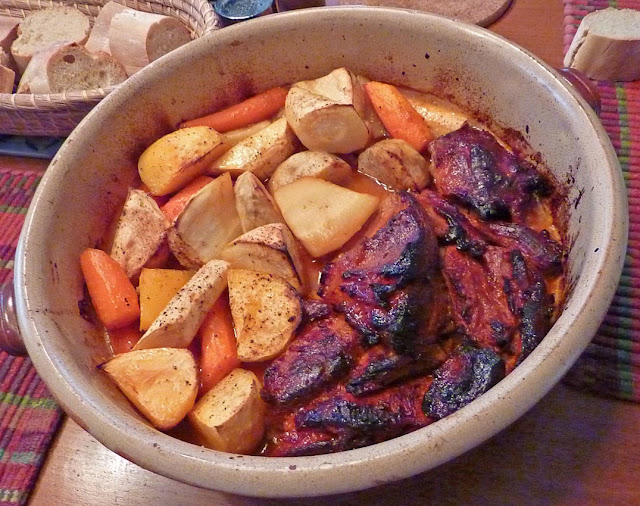 You might not recognize this as a way to cook and serve a ham hock.


Usually, what we call a "hock" is cured meat, as is the corresponding jambonneau in France. It can be smoked or salt-cured, and in France the cured hock is often boned out and reshaped into a familiar form. You see them in charcuteries covered in bread crumbs and ready to be sliced and served (here's a photo). In fact, there are hundreds of photos of ham hocks here.


The hock is the shank or lower end of the ham or pork shoulder — in other words, it can come from either the front or back leg of the hog. The term "hock," by the way derives from the old English word for "heel," according to the dictionary I looked at. 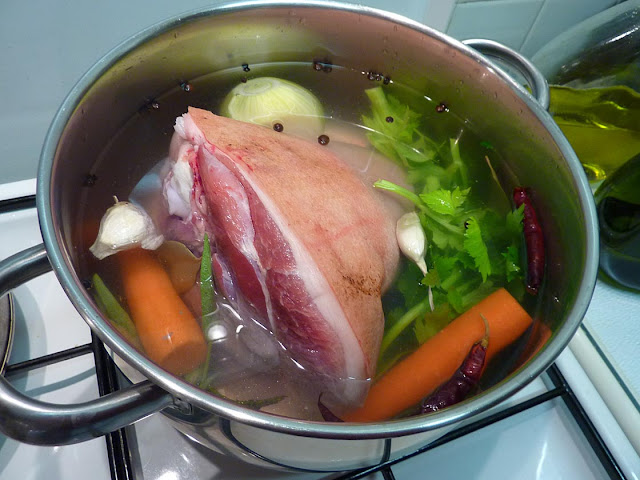 Poach the fresh ham hock with aromatic vegetables and spices.


At any rate, I bought a jarret de porc a few days ago and cooked it. It was a fresh, uncured cut. It seemed like the best way to cook it would be by poaching or simmering it with onions, garlic, carrots, and celery, with salt, black pepper, and some allspice berries. I also threw a couple of dried hot red chili peppers into the broth. 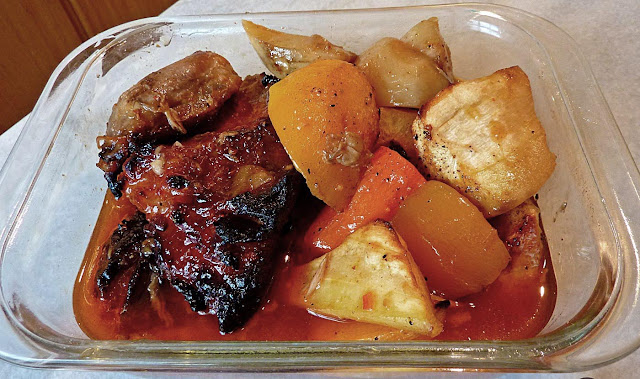 
The shank or jarret, as I'm sure you know, is not an inherently tender morsel. It's not really fatty, even though it's covered with a layer of fat and skin that can be left on or removed before cooking. All that skin (called "rind" as in fried pork rinds) and fat, along with the bone and connective tissue holding the piece all together, produced a lot of gelatin and collagen when poached or simmered. The fresh hock needs long, slow simmering or braising. You end up with a lot of rich stock to use in making soups and sauces.


After the pork shank had cooked for a couple of hours in barely simmering water, I took it out and let it cool to the point where I could handle it without burning myself. I first cut off the layer of rind and fat. Then I pulled all the meat off the bones and trimmed away the cartilage and tendons (the dog is having a feast of all that as a supplement to her daily ration of kibble).

It's not the most beautiful piece of pork cooked this way, but it's delicious and inexpensive.


I left the meat in fairly large pieces and put it in a baking dish with some big chunks of  winter vegetables: Jerusalem artichokes (AKA "sunchokes" or topinambours), rutabagas, carrots, and parsnips. You could add potatoes or sweet potatoes. I put a little bit of the ham hock broth in the bottom of the pan to provide some steam to cook the vegetables and further tenderize the meat.


Then I brushed the meat with some barbecue sauce I had made using sweet and hot red chili sauces from China along with some soy sauce (dark and light), ginger, rice vinegar, and garlic. Any good barbecue sauce you like would work, or none at all — you could just brush the meat and vegetables with olive oil. 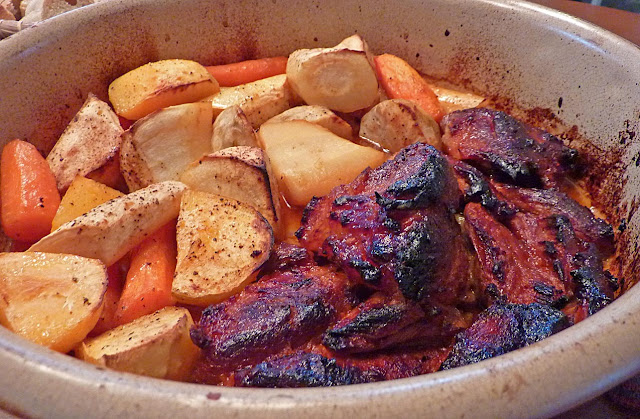 
Put the pan back in the oven at a medium temperature and let it cook until the vegetables are tender and have started to brown. Baste it all with the broth and sauce in the bottom of the pan. Serve it just like that.
Posted by Ken Broadhurst at 08:30