The pork roast that I cooked a few days ago, and that we buy regularly at the supermarket for roasting, braising, or stewing, is usually called a rouelle de porc, or pork round (steak). It's a lean cut — a thick slice of lean pork with a round bone in the middle. 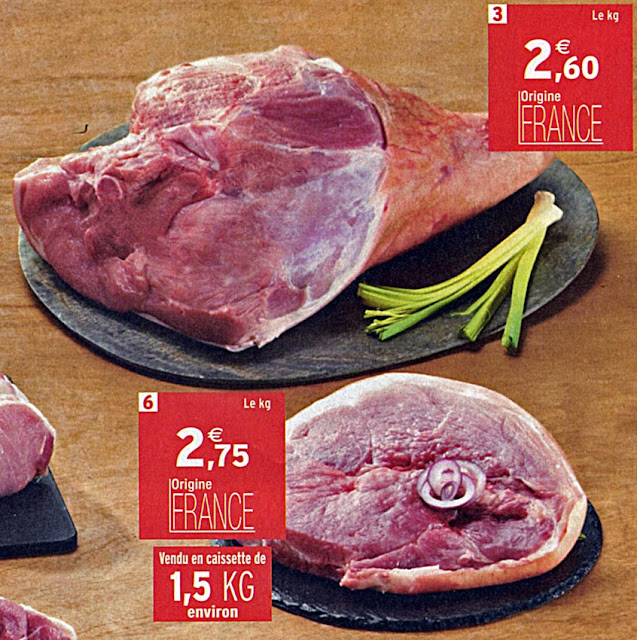 
Sometimes you see the rouelle called a rouelle de jambon, and that does confuse the matter. Most people think the terms "ham" or,  in French, « jambon » are applied only cuts of cured pork. The fact is, the ham, according to the American Heritage Dictionary, is simply:

1. The thigh of the hind leg of certain animals, especially a hog.
2. A cut of meat from the thigh of a hog.

The definition doesn't say anything about whether or not the ham has been "cured" by brining, salting, or smoking. You can buy and cook "fresh ham" or "cured ham." Fresh ham is a "leg of pig" (on the model of "leg of lamb") that has not been cured or cooked in any way. It's a pork roast from the hind leg of the hog. 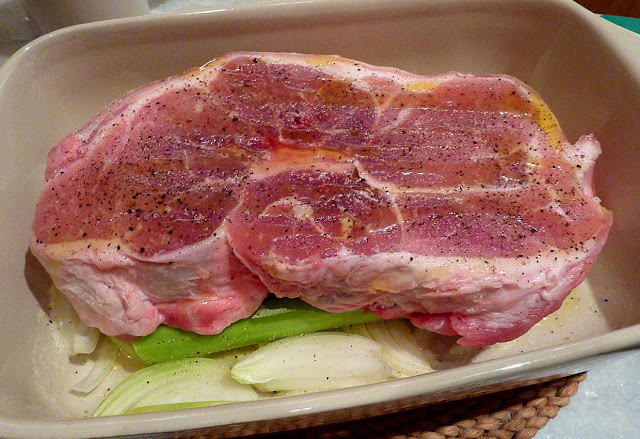 The presentable side of the rouelle de porc I cooked the other day... 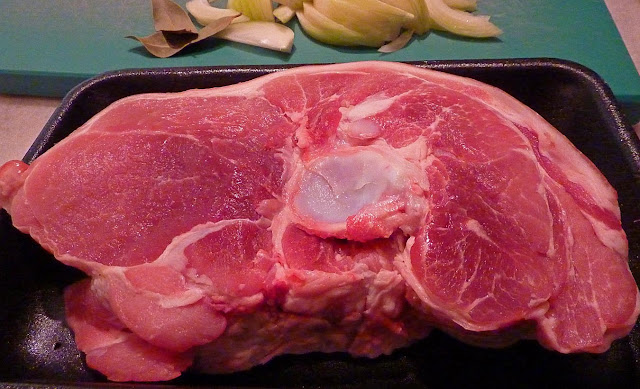 ...and the less presentable side


Since the fresh ham has not been salted, brined, or smoked in any way — it's fresh, un-cured, un-cooked meat — it doesn't require soaking in fresh water before cooking. When I was growing up in North Carolina, I believe that my mother often cooked fresh ham, so it's certainly not unknown in the U.S. (or Canada too, according to what I see on the web). Maybe we had fresh ham because a lot of hogs are raised in the region, and not all of them end up as salt- or smoke-cured meat.


Some people might call the cut I'm describing "raw ham," but that can get complicated when you translate it into French. We all think that pork has to be cooked before being consumed, and is never eated raw. However, the word for word translation of "raw ham" into French is « jambon cru », but jambon cru is a salt-cured ham, sometimes lightly smoked, that can be eaten "raw." What we call "prosciutto" in the U.S. is Italian "raw" ham — in France, it's called jambon de Parme (produced in Parma, Italy). It's dry-cured with salt and eaten, uncooked, in thin slices. The curing makes it safe to eat. 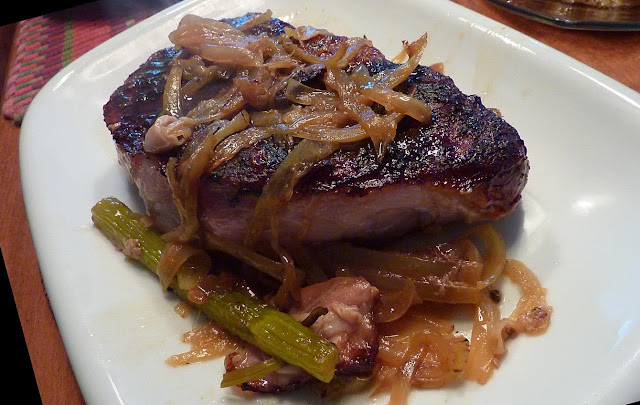 A slow-roasted slice of fresh ham might be called a rouelle de porc confite in French.

The best-known French version of cured ham is jambon de Bayonne, from southwest France, but there's also jambon de Vendée (a province on the Atlantic coast), jambon de Savoie (from the Alps) and so on. All are jambon cru, sometimes called jambon sec ("dried" ham) or jambon de pays (local or "country" ham). Some are salt-cured and then just dried; others are smoked. The kind of ham you put on a regular ham sandwich is called jambon de Paris or jambon blanc ("white ham"), which is cooked and only lightly brined and smoked. We might call it Danish ham.


In France, you can also buy cuts of pork that are called « porc demi-sel » — think "salt pork" in the U.S., but here the pork is much more lightly salted. I've come to the conclusion that it is brined rather than salted, and it's called pork (or other meats or poultry) « traité en salaison », or brine-cured. (The smoked chickens that I buy at the supermarket are labeled as traité en salaison. In other words, they are brined and then hot-smoked — they are actually cooked during the smoking, so you can eat them cold right out of the package or you can re-heat them.) 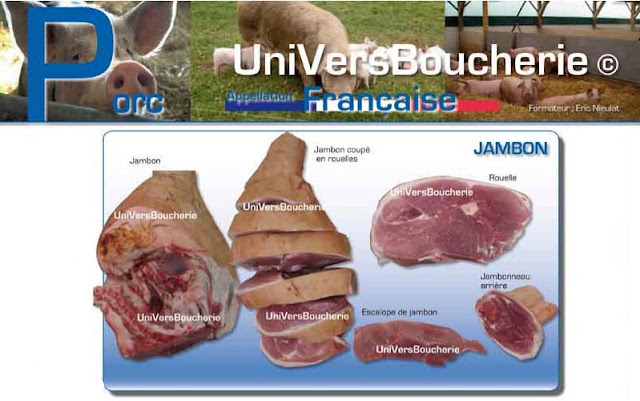 Here's an illustration from www.universboucherie.com showing a fresh ham
either whole or cut into slices like rouelles or escalopes.


"Salted" meats need to be soaked in fresh water for a while, or even in several changes of fresh water over a period of many hours, before they are cooked and served. Otherwise they can be too salty. Salt cod is treated that way, as are cured hams in the U.S. — Smithfield hams or country ham, for example. Salt-cured ham in Europe is safe to eat "raw" and when you eat cold meats, you eat very thin slices with bread so the saltiness isn't so exaggerated. Meats like ham and pâtés that are served cold need to be over-salted, in fact, so that they won't taste bland.


Demi-sel cuts of pork, which are brined the way you might brine your Thanksgiving turkey before roasting it, don't need soaking before cooking. It's optional. 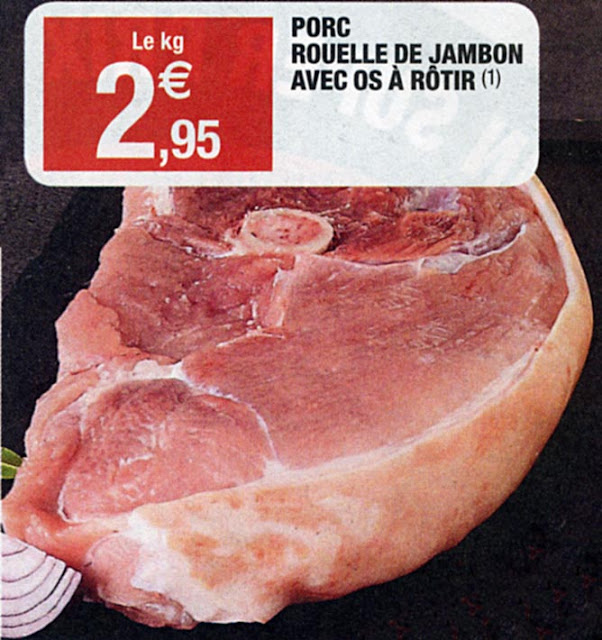 
A "fresh ham" or « jambon frais » is just another fresh pork roast. You roast it the way you would any other cut of fresh pork, except that the ham can be gigantic — 15 to 30 pounds — so it needs long, slow cooking (poaching or roasting) to cook all the way through without burning on the outside. That's why in France the fresh ham is cut into thick steaks that you can buy in the supermarket. They cook much more quickly, and they benefit from stewing, braising, or slow-roasting because they are a very lean meat.
Posted by Ken Broadhurst at 08:05