Fresh ham, sprouts, and a crown of potatoes

Recently I decided to make something in the kitchen that I had seen on Ivan's blog, A Normandy Kitchen. Ivan is a British man who has professional training as a cook, and he makes amazing dinners and takes beautiful photos of the food he cooks. 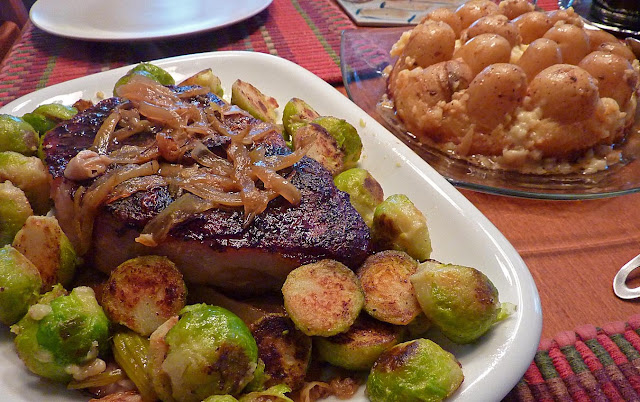 The dish that caught my eye this time was something Ivan calls a "potato crown." You can see it on his blog here. Mine didn't come out exactly the same as his, but it was good in its own way. A crown of potatoes is a layer of mashed potato studded with whole or halved small potatoes, as you'll see. 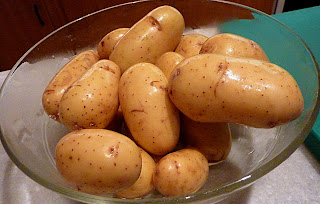 I used potatoes of the Charlotte variety. Charlottes are sort of all-purpose pommes de terre — they are waxy enough to stand up to boiling without falling apart, and they are mealy enough to be good as sauteed or French-fried potatoes. Or as mashed potaotes. They served my purpose.

Since the Charlottes weren't uniform in size, I picked through them and chose the ones that were long and skinny. I figured I could cook them until they were nearly done and then cut pieces of the same length (or height) to use "whole" (not mashed), and then I could make mashed potatoes out of the pieces and whole potatoes I had left. 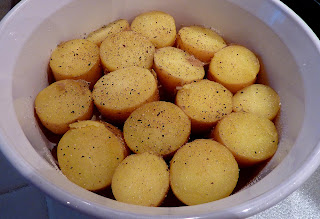 What you do is to stand the cut (or whole small) potatoes up on their pointy end in a buttered or oiled dish, packed together so that they won't fall over. Then you make fairly stiff mashed potatoes and spread a layer of them over the top of the others. Put the dish in a medium oven and let it cook as long as an hour, until the top of the mashed potato has browned and all the potato has had time to cook through completely. To serve it, turn it out of the dish so that the whole potatoes form the "jewels" in the crown. 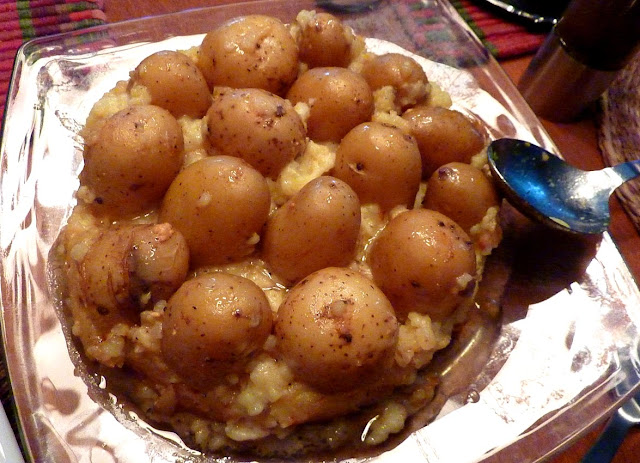 The texture combination of whole boiled and mashed potato is pretty good. 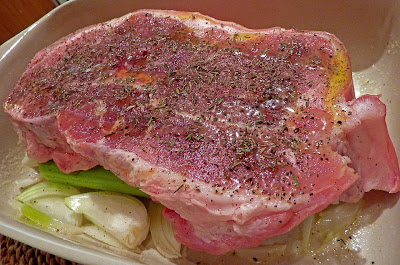 The rest of the meal was a pork roast — a so-called rouelle, which is a thick slice of fresh ham — and some Brussels sprouts that we had in the fridge. After browning the meat slightly, uncovered, in a hot oven, I turned down the heat and cooked the pork roast long (four hours) and slow (150ºC, 300ºF) in a covered pan in the oven, on a bed of sliced onions, celery stalks, and bay leaves. I poured in some white wine and sprinkled some olive oil and dried thyme over the top of the lean cut of pork. 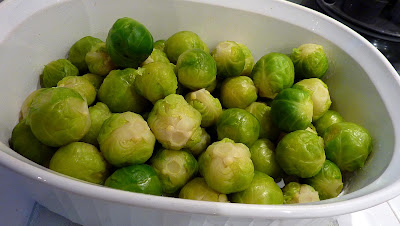 When we make Brussels sprouts, we often blanch or parboil them first, then slice them in half and sauté them in olive oil or butter. You can see them in the first photo up above. A little flour sprinkled on during the sautéing gives them a nice golden-brown crust.
Posted by Ken Broadhurst at 07:30