...for something completely different. The contrast between where we used to live and where we live now is striking when you look at these photos I've found in my archives. Just compare them to the ones I've posted over the past week.

I took this shot from about 20 miles south of San Francisco, in Belmont, California,
where I was working in January 2002. I had just acquired a Canon Pro90IS
digital camera with a long zoom. That's the Bay Bridge on the right.


Since Walt is showing pictures from New York, I thought I'd go across the country to San Francisco. We lived there from 1986 until 2003, when we packed up and moved to France. 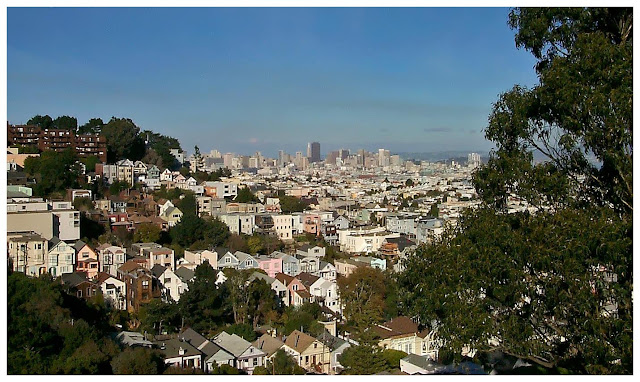 I took this shot from the S.F. neighborhood where we lived from 1995 until 2003.
We didn't have this view from our windows, though — I had to walk a ways.


All these pictures were taken in December and January — some in the late 1990s, and others in the early 2000s. As you can see, the weather out there was often beautiful in wintertime. It was the windy, foggy, chilly summers you had to watch out for.

This one is a view of downtown San Francisco from Twin Peaks at sunset.


I got my first digital camera in 1998, I think it was, thanks to CHM and Walt. They went together and bought it for me as a Christmas present. Digital cameras were expensive back then.

Here's another shot from our S.F. neighborhood. Looks like it was a smoggy day.


That same Christmas, I bought Walt a new film camera and some lenses. He wasn't ready to go digital yet. Though that first digital camera is long gone, I still have the 2002 Canon digital camera and it works perfectly, but I never use it any more. It's too big and bulky. I probably couldn't give it away, much less sell it, at this point. I'm sure Walt couldn't sell that old film camera.
Posted by Ken Broadhurst at 07:55