Adjusting to the light

Are you slowly replacing all your incandescent light bulbs with fluorescent bulbs or some other kind? Or did you do it all at once? We're still in the process.
I don't know much about the situation in the U.S., but here in Europe the classic, Edison-developed light bulbs we had always used have now been phased out. You can still find a few of them, in lower wattages, in the stores, but officially their commercial distribution was stopped last September. Apparently, merchants are allowed to sell off existing stocks.
We've replaced nearly all of the incandescent bulbs in our house with the ones they call compact fluorescents. They look more or less like the old light bulbs but they behave differently. For example, they take a while to warm up after you switch them on. The light they emit gradually gets stronger until they come up to full power. It can take a few minutes. 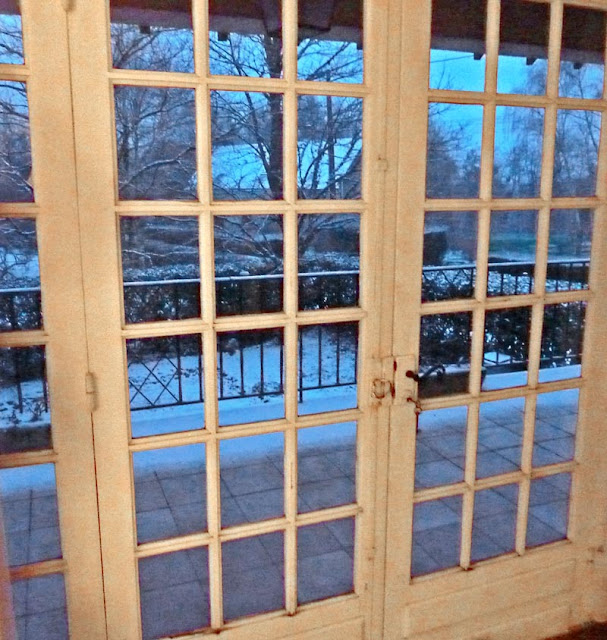 Yesterday morning's snow was all melted by noon.
One compact fluorescent bulb we bought at Ikea a couple of months ago has an even more annoying way of warming up. When you turn on the lamp, it comes on for two or three seconds, then it shuts itself off for two or three seconds. It comes back on. It goes back off. In other words, it blinks off and back on four or five times before it finally makes up its mind and decides to light up your life. I have to turn it on and either look away or just close my eyes for 15 or 20 seconds while the light show is going on.
The compact fluorescent bulbs actually produce a kind of illumination that doesn't especially bother me, after they've powered up. But often they buzz. It can be annoying if you're sitting close to one when you're trying to read. I've also noticed that some of them seem to dim down over time, so that a bulb that was giving you adequate light for reading a few months ago ends up seeming too dim.
At any rate, since I now do most of my reading on a tablet computer, I don't need much light at all. I've learned to read my paper documents during daylight hours, standing or sitting near a window.
These bulbs are supposed to last a lot longer than the old incandescents. And they sure cost a lot more to buy. Why is it, though, that the supermarkets now all have big recycle bins at their entrances for burned out fluorescent bulbs? People haven't been using them for very many years, and they are burning out already? I don't understand. 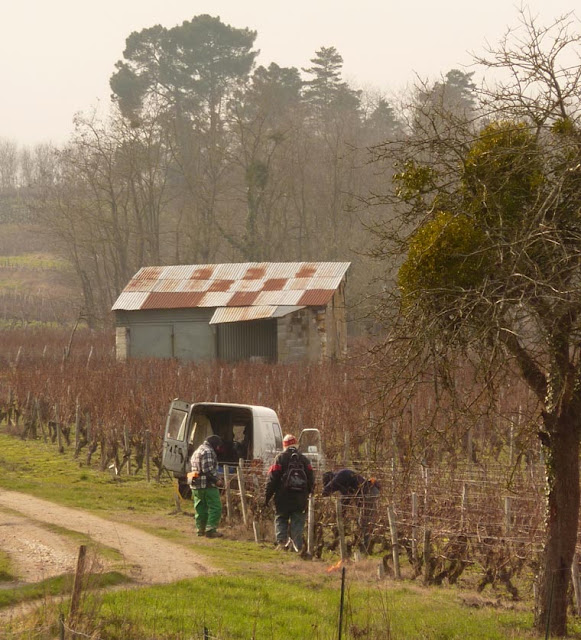 The Renaudie winery's vineyard crew was working out behind our hedge on Friday.
Fluorescent bulbs use a lot less electricity than the old incandescents, so it makes sense to install them in lamps and fixtures that stay on for many hours every day (and in winter here in Saint-Aignan, quite a few of ours do). In other situations, where you need instantaneous illumination and don't leave the light turned on for long stretches of time, they're less well adapted.
In our downstairs pantry, for example, which is windowless... If you go in there to look for something, you need bright light immediately. You can't wait for a bulb to warm up. And you don't stay in there long, so unless you forget to turn it off when you leave the room (confession: it's probably age-related), the bulb hardly ever stays on for more than a couple of minutes. I don't know what we'll do when our stash of incandescent bulbs runs out.
Years ago, we installed halogen fixtures in our bathroom and kitchen. Those also can represent a significant savings in electricity costs for the amount of light they produce. In the bathroom, they're great. They give off a sunny kind of illumination. The bathroom light is another one that doesn't stay on for very long each day. Reducing the amount of electricity you use for lighting that space isn't much of an issue. More important is having pleasant, bright, immediate illumination. 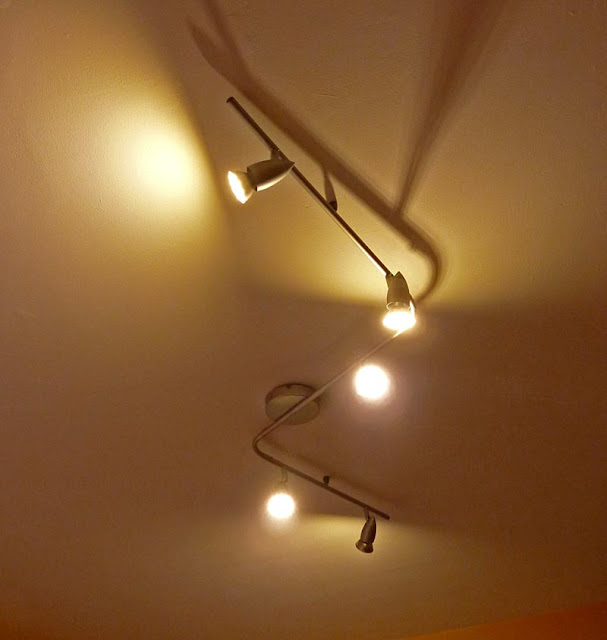 The kitchen ceiling fixture now has LED bulbs in it, replacing halogen bulbs.
Now halogen lights are being phased out. I'm sorry about that. I've really enjoyed having halogen lighting in the kitchen since we installed a new ceiling fixture in there five or six years ago. The light is bright and warm. The fixture takes five 35-watt bulbs, so that comes to 175 watts. Keeping it on for long stretches of time means high energy consumption. And anyway, the halogen bulbs will soon be hard to find. You can stockpile them now, but how many are you really willing to buy and store?
Recently, for a combination of reasons, we decided to replace the halogen bulbs in the kitchen fixture with LED bulbs. They are the next great thing. The fixture that was using 175 watts when you turned it on now consumes only 12 watts! That's 2.4 watts per bulb. Now I feel like I can leave the kitchen light on longer without worrying about the electric bill. 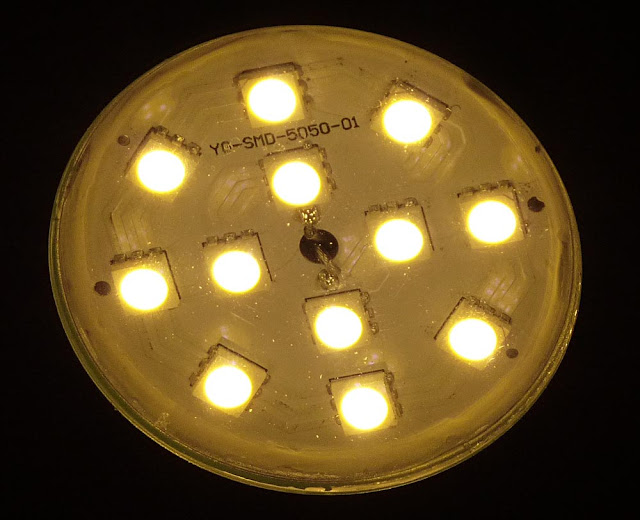 An LED bulb looks like some kind of radioactive shower head.
The problem is, I don't like the quality of the light. It's cold. It's blue-ish. It's yellow-ish. It looks artificial, or institutional. And my camera doesn't like it either. The photos of food that I like to take, and which used to be so bright and appetizing (I thought), now look kind of sickly. I've been fiddling with camera settings for a couple of weeks now.
At first, I thought that changing the "color mode" setting on the camera from Vivid to Warm had solved the problem. Now I'm not so sure. Some pictures look fine with that setting, but others still are unsatisfactory. I use Photoshop to crop and enhance my photos, but I don't want to spend hours every day trying to make silk-purse images out of sow's-ears photographs.
Maybe I need a new camera. Or maybe I just need to put the halogen bulbs back in the ceiling fixture, for as long as they last.
Posted by Ken Broadhurst at 08:00