Apparently, light fixtures and bulbs that use a bayonet-style mount are common not only in France but also in Great Britain, Australia, and other countries. They don't seem to exist — at least not for household lighting — in the U.S. or Canada.
For me, les ampoules électriques à baïonnette have long been a famiiar feature of French lighting systems. The bayonet has always seemed to me to be an old-fashioned style of light socket compared to the more familiar screw socket invented (I think) by Thomas Edison — even though Edison invented it in 1909. I believe they are making fewer and fewer bayonet fixtures as the years goes by. 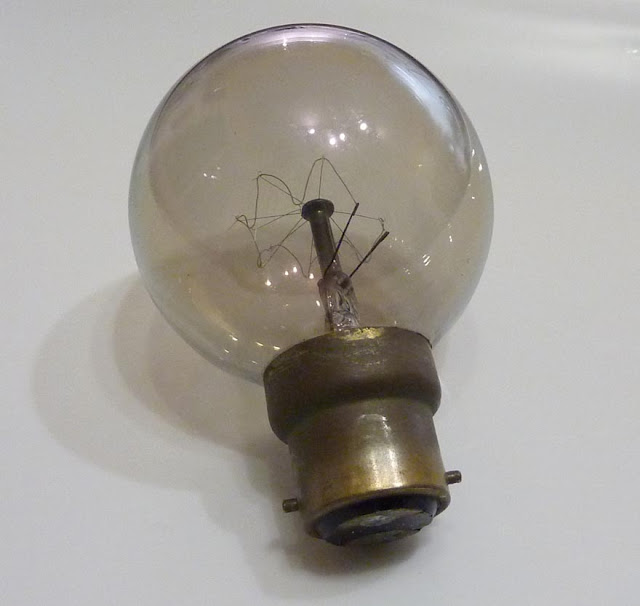 This old bayonet style bulb has been in use in our downstairs panty for who-knows-
how-many years. It's been giving us light for 10 years now, and it still works fine.
Here at our house outside Saint-Aignan, we have at least four light fixtures and two old lamps, all of which were here in the house when we moved in 10 years ago, that require ampoules baïonnette. I guess we should have changed them by now, or will need to do so someday soon. 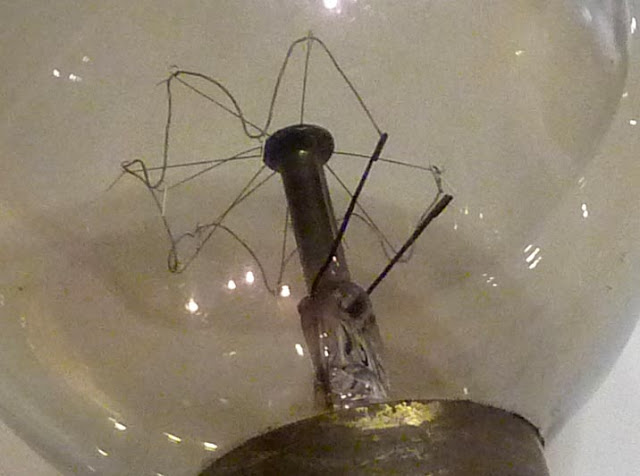 Maybe it's this elaborate tungsten filament that has kept the old bulb burning for so long.
The fact is, however, that you can find compact fluorescent bulbs with bayonet sockets fairly easily — at SuperU or Intermarché, for example. Having two different kinds of sockets is just another complication you face when you're replacing a light bulb here. Not to mention the fact that the so-called Edison screw sockets come in at least two sizes, large (E27) and small (E14)...
You have to have a stock of all of these kinds of bulbs on hand in case a bulb somewhere in the house needs to be replaced.
Posted by Ken Broadhurst at 07:55