I think the snow is melting already, but we are supposed to get more of the stuff today. That, or maybe a mix of snow, sleet, and rain. So it's going to be a slushy mess, as the half-melted mush re-freezes and more falls on top of it. I'm not sure when the real thaw is supposed to set in. 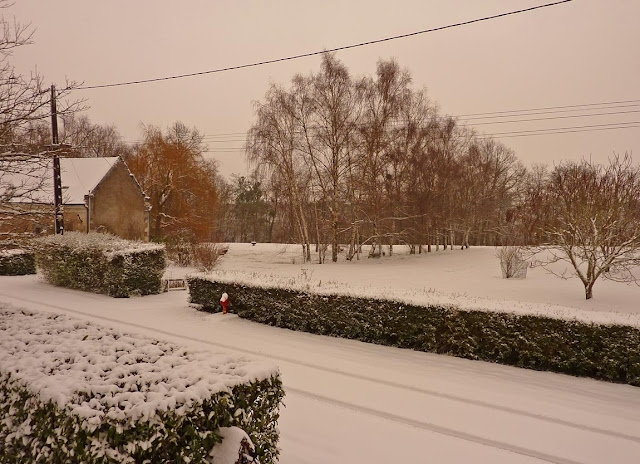 This looks like a sepia-tone photo, but it's actually in color. It's the kitchen window view.


This is the time to enjoy how pretty the snow was yesterday, and to be happy if you don't have to go to work somewhere. The lead story on the news is what a hassle getting to work in the Paris region will be for commuters this morning. Paris had as much as four inches of snow in places, and it stuck. That's pretty rare, they said on last night's news report. 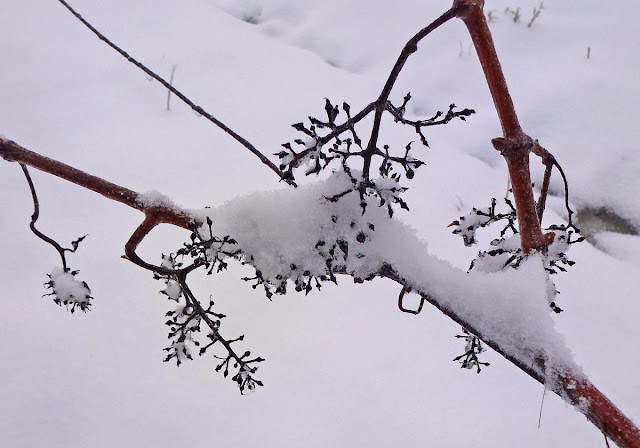 Bare grape stems in the snow


The snow ended yesterday, early in the afternoon. At that point, only one car had driven by our house, and it was headed down the hill, not up it. The car had come in by way of the gravel road through the vineyard, which doesn't involve climbing a slippery slope. Later in the day, the village sent a little snow plow through, making our road slightly more passable (I guess). 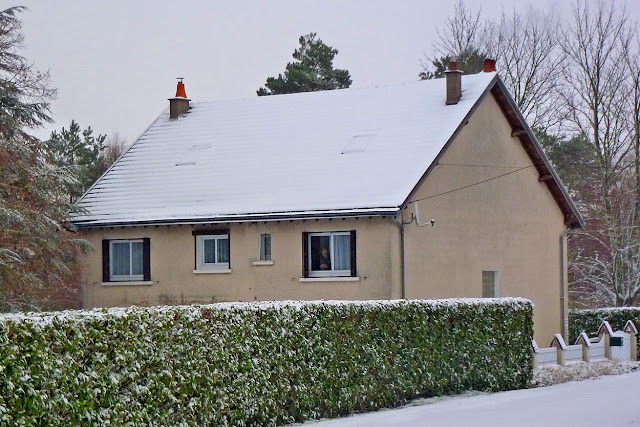 That's Walt in the back window, watching me and Callie come back from the morning walk.


We called the friends in Saint-Aignan who had invited us to dinner and expressed our regrets. It was still snowing at that point, and it looked like getting the car out would be difficult if not impossible. The problem is that just getting the car onto the little road means getting up a slippery little slope. In past winters, we've had a lot of trouble getting the Peugeot out through the front gate. Once we went sliding sideways and nearly rammed into a fence post. 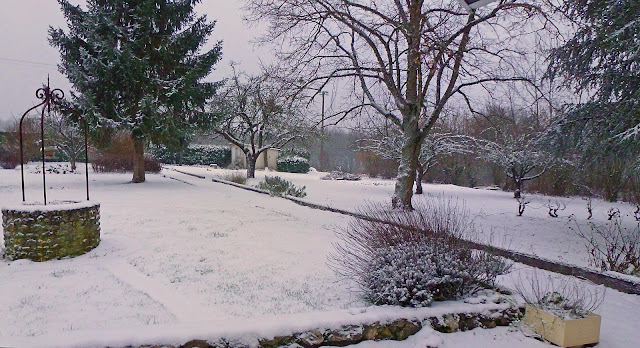 The back yard yesterday morning, 20 January 2013

We're going to survey the situation and see about going out tonight. However, the weather report on TéléMatin just said that we are still in the winter weather warning zone for more snow or sleet and icy conditions. My guess is that it will be better to stay in unless we absolutely have to venture out, or the temperature suddenly rises and the ice and snow melt away.
Posted by Ken Broadhurst at 07:30