Yesterday I finally got my "new" furniture finished. The two pieces are shipping crates that were in our attic when we moved into this house in 2003. They were full of old papers — mostly French tax forms and form letters left here by the woman who owned the house previously. She was retired from the French tax administration.

The papers had no value. We'll burn them in the wood stove this winter. But when we cleaned up last spring, in anticipation of the attic conversion, I thought the crates were things I wanted to save. There are three of them. The man who had this house built about 45 years ago was employed by the French aeronautics and space agency. He spent a few years on assignment in Kourou, French Guyana, where French satellites are launched. That's in South America. 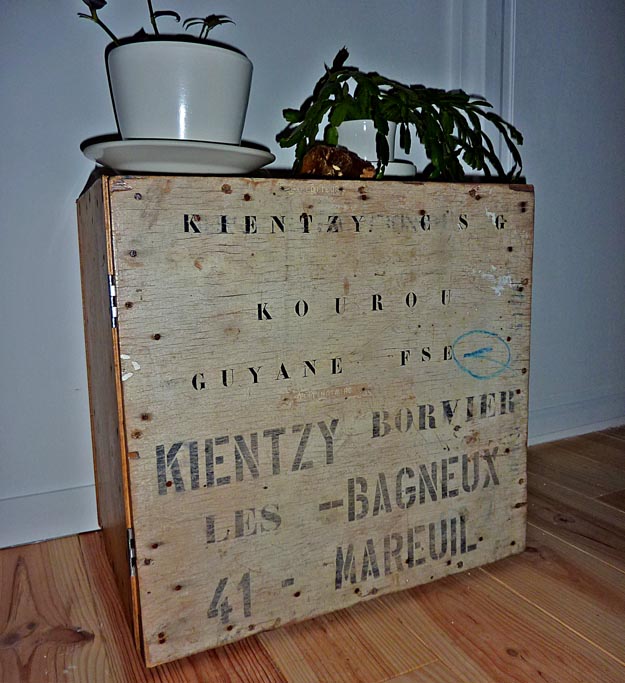 You can see the new hinges on the side of the crate.
When Monsieur Kientzy moved back to France, he and his wife apparently packed up some of their belongings and had them shipped back to Mareuil-sur-Cher, a village adjacent to Saint-Aignan, along the banks of the Cher River. Mr. Kientzy's first wife was a native of Mareuil, and they had this house built here.

This all happened 35 to 40 years ago. You can see the addresses on the lid of one of the crates. Les Bagneux is a hamlet in Mareuil. 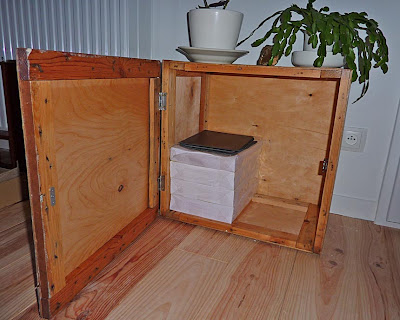 Here's the door open so you can see inside. I plan to put in a shelf later.
I took two of the crates outdoors and scrubbed them with soap and a stiff brush. That was when the weather was hot, and I let the wooden crates dry in the hot sun. Then I varnished them, inside and out, several coats. I decided to use them as little tables, or plant stands, and to store things in them. I put feet on the bottom (the side, actually), and I put hinges on the lids to make them into doors. I attached one of those little magnet clips to each box to hold the doors shut. 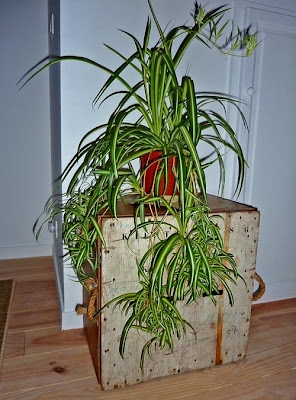 This is the second crate. The third one isn't done yet.
And now I've finished that part of the job and I'm using the two crates in the loft, as you can see in the pictures here. For the moment, I have put printer paper in one, and in the other I'm storing a ton of CDs and DVDs that are in notebooks in plastic sleeves. Those items are heavy and give the boxes some heft and stability. They are ballast, I guess. 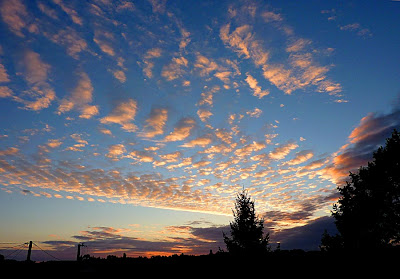 Sunset from the loft window on 26 September 2010.
I've become handy and resourceful in my old age. Well, I've always been resourceful, I think, on some level. When I worked in Paris, people — employers, colleagues — told me I was très débrouillard. La débrouillardise is resourcefulness. It means the ability to make things happen, to figure out creative solutions to everyday problems.
Posted by Ken Broadhurst at 07:33