A couple of days ago, Walt picked enough red and yellow tomatoes to fill up a three- or four-gallon bucket. We ate a few of the tomatoes in a salad, but we had a huge number left. That meant we needed to make sauce, which is the easiest, most space-efficient way to process fresh tomatoes for long-term storage.

Since the freezer is full of squash (courgettes et pâtissons) I decided I ought to can the tomato sauce — la mettre en boîtes or en conserve — rather than put it in plastic containers for freezing. Canning is a lot more work, but we have plenty of jars and there's room in the cellar to store them. In the cellar, the wintertime temperature is in the 40s F (5º to 10º C). That's not as cold as a refrigerator, but almost. 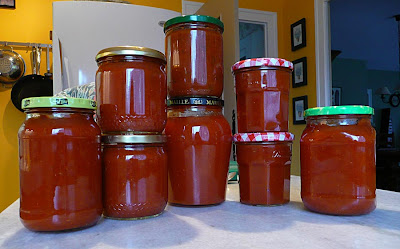 Du tomata en conserve — tomato puree put up in sterilized jars
Once we had washed, trimmed, cored, and roughly chopped the tomatoes, they filled a 12-quart (3-gallon or 11.5-liter) stainless steel cookpot. We added about 20 cl of white wine and 20 cl of water (less than a cup of each, in other words) to the pot to keep the tomatoes from sticking on the bottom at the beginning of the cooking. The only seasonings we added were some dried bay leaves from the laurel tree out back, and some salt and pepper.

After the tomatoes had cooked for an hour or more, we ran them through a food mill (un moulin à légumes) to puree the flesh and remove most all of the skin and seeds. Then the puree went back on the stove to cook for a few hours longer at very low temperature. It just barely bubbled, but that was enough to evaporate some of the liquid. The idea was to make a thick sauce that would fill fewer jars and that can be thinned with water or wine when we cook with it.

One French recipe I found for this kind of sauce says it is called tomata in southern France. The word is masculine so it's le tomata or du tomata. It's not quite paste, but thicker than sauce — a thick coulis, I think. One thing people do is put a layer of olive oil over the top of the sauce in each jar, but I didn't. Instead, I added a teaspoon or two of vinegar to each jar of sauce, depending on the size of the jar, to increase the acidity of the sauce and help protect it from spoiling.

The tomato puree cooked down until I had about 5 quarts left — the pot was less than half full when I ladled the boiling sauce into sterilized jars and put on lids that I had also sterilized. Then I put a wire rack in the bottom of a big pot of boiling water — enough water to cover all the jars completely — and set the jars on it and boiled them for nearly 45 minutes. I think that will sterilize the sauce and the containers so that everything will keep for 9 to 12 months. 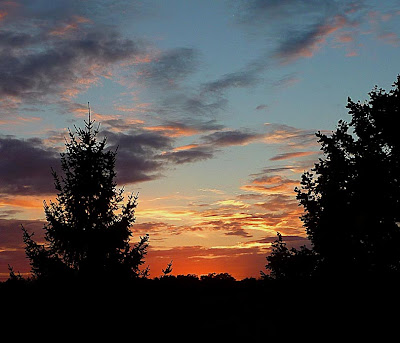 Yesterday's sunset, seen from upstairs looking
out of one of the Velux roof windows
All the jars sealed when I took them out of the boiling-water bath and let them cool down slowly. The lids "popped" the way they are supposed to, so you know they are hermetically sealed. I use jars that I save and that people give me. The main thing is that the lids need to be in very good condition, and all the jars and lids get sterilized either in the oven at about 225ºF (110ºC) or in a boiling water bath before being filled and closed.

You can see from the picture up above how much tomata we ended up with. It will make good sauce for pizzas and pasta over the winter, and it tastes a lot better than the tomato puree you buy at the supermarket. When you open a jar, you can flavor the sauce with onion, garlic, herbs, meat, olive oil, or whatever you want.
Posted by Ken Broadhurst at 09:30