Not ancient, but old. As old as I am, some of them. Or nearly. I have quite a few such old things. They include furniture that my father built for me or my family back in the early to middle 1950s. 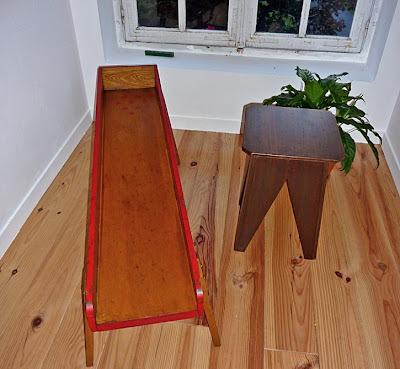 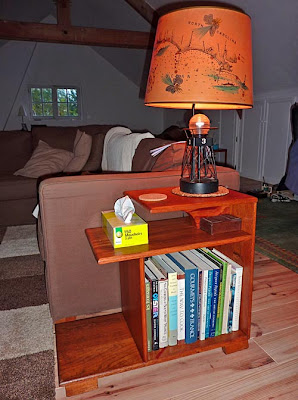 My father built this end table (and another identical one,
of course, not pictured) back in the 1950s. And my
parents gave me the lighthouse lamp when I was
a little boy. I varnished the tables
but not the lamp!
Also some pieces of old furniture that Walt and I bought when we lived in Washington DC back between 1982 and 1986. A big old chest of drawers with a round mirror. A nice old buffet for the dining room. A 100-year-old wooden trunk that we keep full of maps of all kinds. An old double bed that my mother gave Walt as a present back then after buying it at an estate sale.

Not to mention some pieces of furniture that were new back then but have become old with the passage of time. Another chest of drawers. A platform bed and a set of little tile-topped tables. A couple of office chairs built by the Bolling Chair Company in North Carolina — I went to college with Bolling's son in the 1960s. Finding Bolling chairs in a second-hand store when I lived in San Francisco in the late 1980s was a surprise. 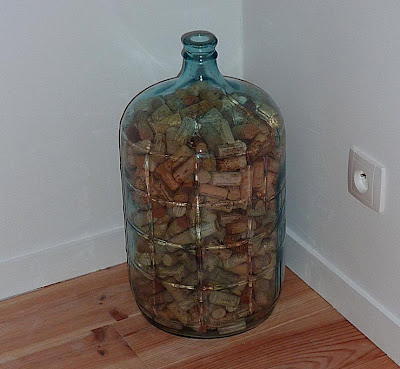 Here's something I couldn't varnish. It's one of those big old
water fountain bottles. We filled it up with corks back in
the 1980s. It got moved to France by accident in 2003.
And now the old shipping crates that I found in the attic of our house here in Saint-Aignan in 2003. I don't know how old they are. At first I thought I would just use them as storage boxes in the garage. 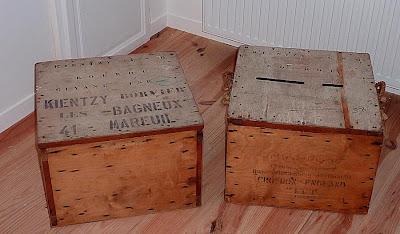 Old shipping crates, now cleaned up and varnished, will make
nice little tables upstairs.
But then I realized that I had a couple of gallons of varnish left over from finishing the floor and stairs in our new space. I took the old crates out on a sunny day and washed them down with the garden hose and a stiff brush. They dried in the sun. Now I've varnished them. The man who lived here back in the 1970s and '80s spent time in French Guyana, and shipped some of his belongings back to France in these crates when he returned to Saint-Aignan. 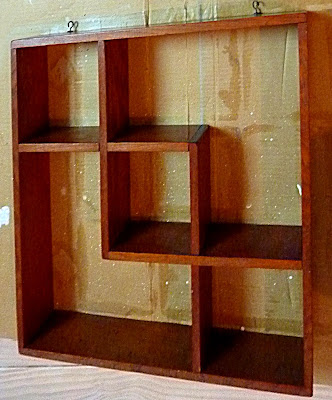 A shadow box that my father built when he was a very young man.
Walt's been keeping his collection of miniature
Eiffel Towers on it for a few years.
I'm varnishing everything. As Walt said, don't stand or sit still too long around here — you'll get varnished. It's kind of satisfying to spend time making these old wooden things look clean and cared-for.
Posted by Ken Broadhurst at 07:58