Fall 2010. That's what has happened to our weather. It's almost cold in the house this morning, and we don't have working central heat yet. There's no water in the boiler, and therefore no steam in the radiators. The temperature outside is 7ºC, or about 45ºF, with a bright blue sky and a big moon.

En théorie, the heating contractor will come back this week and get everything going. Most of the radiators are hooked up, and it's just a matter of refilling everything, checking for leaks, and bleeding the air out of the radiators. We already had the boiler maintenance man in last week to replace a part — the expansion tank — so that the heating system will work properly. And we ordered and took delivery of 2000 liters — 500 gallons — of fuel oil. 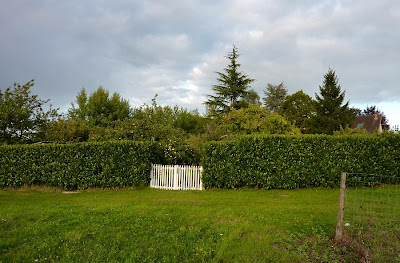 The back gate — did I mention the hedge that needs trimming?
We also had a roofer/chimney sweep in last week to clean out the wood stove and the chimney. That maintenance is required by insurance every year. The man also went up on the roof and cleaned out the valley between the dormer window over the kitchen and the main roof, to try to prevent the kinds of leaks we had in June 2007 and again this past July. We may end up having to have that part of the roof rebuilt. 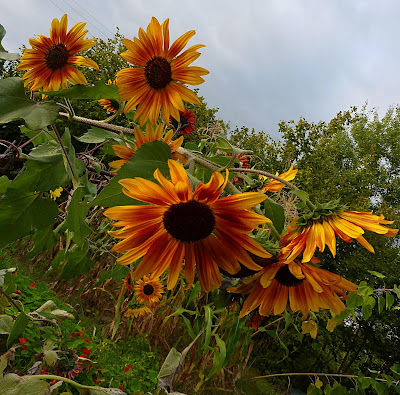 The last gasp of the 2010 sunflowers and nasturtiums
That's what it's like getting the house ready for winter. Soon, we'll need to start bringing potted plants inside to protect them from frost. And we'll need to clean up the vegetable garden by harvesting the rest of the tomatoes, eggplant, corn, and peppers. If the weather doesn't go too wet, I'll run the tiller through the garden plots again. I'm still hoping for some warm, dry days before the dreary rains set in around the first of November. 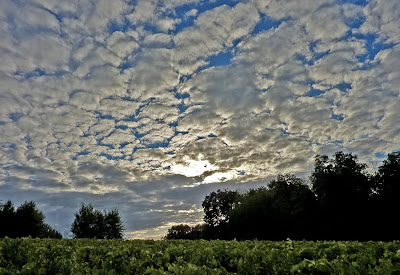 Autumnal skies, yesterday afternoon
Then we'll be ready to deal with the falling leaves. We rake up most of them and spread them over the vegetable garden plots to keep the weeds down. And then they'll get tilled into the soil early next spring. It doesn't get cold enough here in Saint-Aignan to stop grass and weeds from growing over the garden plots in wintertime, unless you put down tarps or a layer of dead leaves. 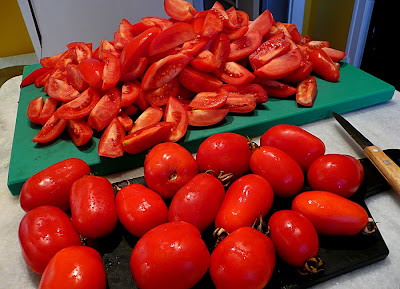 Working on tomatoes yesterday morning
We have a lot of wood to cut too. Walt has started on the woodpile out front, cutting the long logs into shorter sections that will fit into our wood-burning stove. In addition, there are at least three trees out back — including one mostly dead apple tree and two plum trees that blew over in last winter's storms — that all need to be sawed up and stacked as firewood for coming winters. 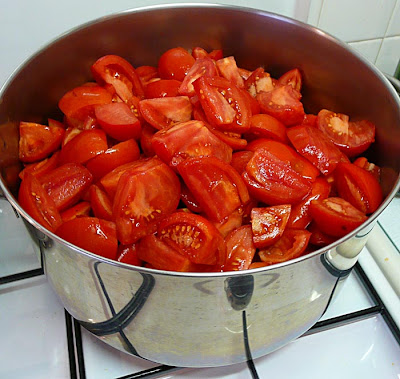 The sauce pot
Meanwhile, the tomatoes keep coming. I trimmed, cored, and sliced three or four dozen Roma tomatoes yesterday and put them in a big pot with wine, onions, carrots, bay leaves, thyme, and garlic to make sauce. We'll have to pack all that up for freezing, or put it in canning jars, today or tomorrow.

I'm almost looking forward to winter, when we can relax and just enjoy cooking, eating, reading, and waiting for springtime to arrive.
Posted by Ken Broadhurst at 09:16