I love this time of year when we have fresh tomatoes, zucchini, and eggplant. One of my favorite things to do with them is a gratin with mozzarella and parmesan cheese. Luckily, we can find these cheeses at the supermarket. You could of course find French cheeses that would be good too.

I've posted about this kind of gratin before, of course. Several times. For a complete description, see this August 2009 post. And here's another one from September 2008. There's also a cheeseless variation on the gratin that I first made in 2004. 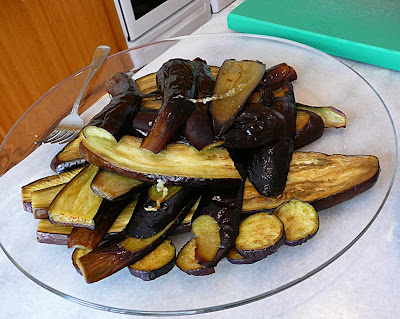 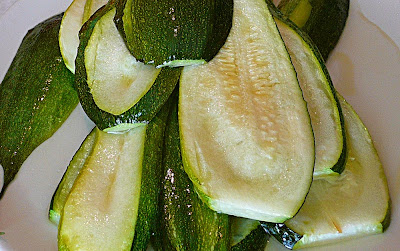 Slices of eggplant (aubergine) and zucchini (courgette), pre-cooked
The step that takes the most time is pre-cooking the eggplant and zucchini slices. Put them on a baking sheet, brush them with olive oil, and bake them at 400ºF (200ºC) for 10 minutes or a little longer, until they just barely start to turn golden brown. You might have to do them in several batches. 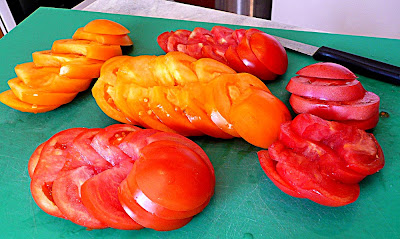 And fresh tomatoes from the garden, trimmed and sliced
Then make layers of the cooked eggplant and zucchini slices — the zucchini is optional — with fresh sliced tomatoes and slices of mozzarella cheese. Salt and pepper the layers well and sprinkle on some dried or fresh herbs — thyme, rosemary, basil, mint, etc., one or more. Some minced or smashed garlic would be good. Top the gratin with either mozzarella or some grated parmesan. Then bake the dish in the oven at the same temperature for 45 minutes to an hour. 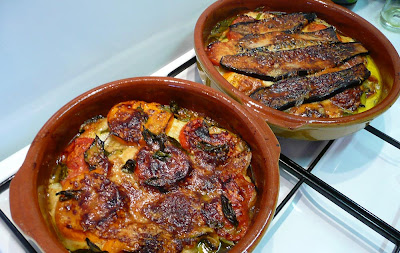 Let the gratin brown, but not too much. These two were
topped with grated parmesan and almost burned.
They were delicious anyway.
This kind of gratin is actually better the next day, after the vegetables have had time to re-absorb some of the juices they released as as they cooked. Reheat it in the the oven or the microwave. Use good bread to sop up the remaining juices in the baking dish.