It's strange to have all these ripe tomatoes so late in September, but that's what we have this year. Summer was late, and now autumn seems to have arrived early in the Loire Valley.

Yesterday, I made « tomates confites ». That's hard to translate, and the best I have come up with is "slow-roasted tomatoes." I blogged about them back in August 2009, and here's a link to that post. 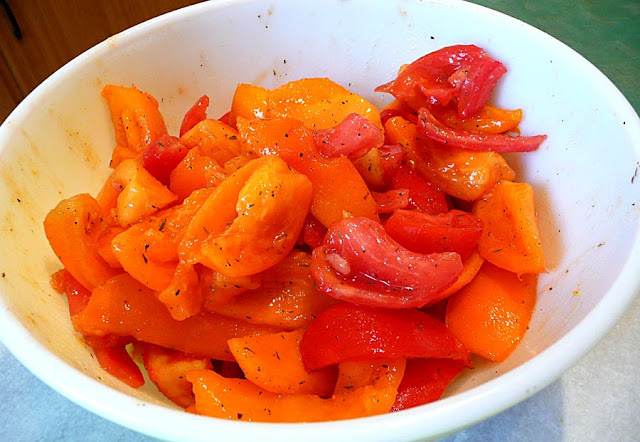 A mix of red and yellow tomatoes trimmed,
seeded, and seasoned for slow roasting

The verb confire describes a key concept in French cooking. You probably know what confiture is — it's jam, or what we call "preserves" of fruit. That's the same term. There are also fruits confits — candied fruit. And then there's confit de canard — "preserved" or slow-cooked duck. It's very common on French restaurant menus these days, and is a staple of the traditional diet in southwestern France. All of these foods have one thing in common: slow cooking. 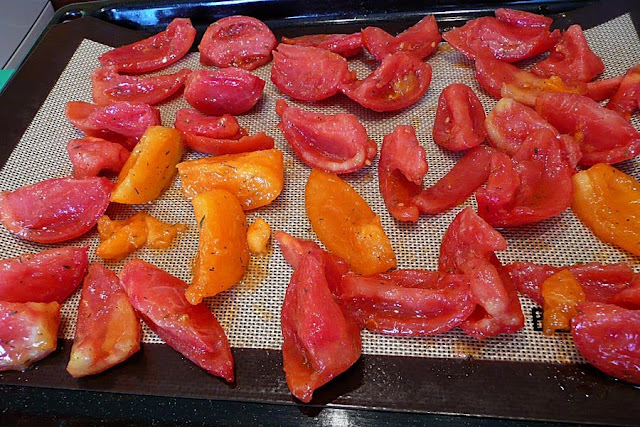 Set the tomato wedges on a baking sheet, leaving space
between them so that they can dry out as they roast.

Confire means to preserve a food product by slow cooking either in sugar or in fat. When you make tomates confites, you cook the tomatoes slowly not in sugar but in olive oil. Actually, there is some sugar in the mix, along with salt, pepper, and thyme or some other herb. The preserving agent, though, is oil, and low heat. The sugar just emphasizes the tomatoes' natural sweetness, and it's optional. 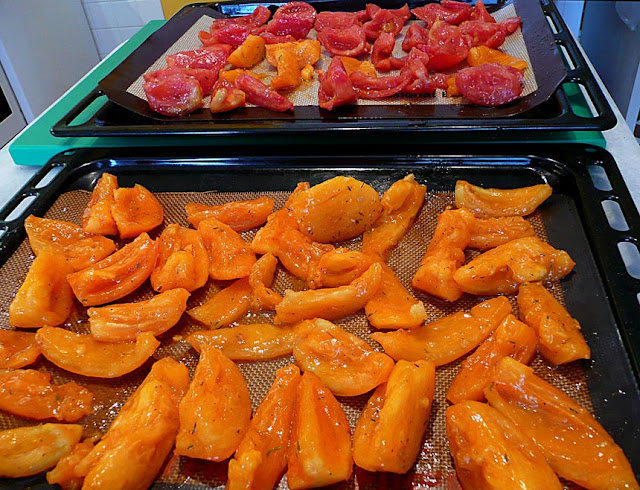 Make a lot of them. They go fast.
These are ready to go into the oven for three hours.

Take good ripe tomatoes and cut them into wedges. Peel them first, if you want to. Cut out the cores. Using your fingers, a knife, or a spoon, remove the seeds, juice, and pulp from the wedges, leaving just the firm flesh. Save the pulp, juice, and seeds, which you can add to a tomato sauce later. 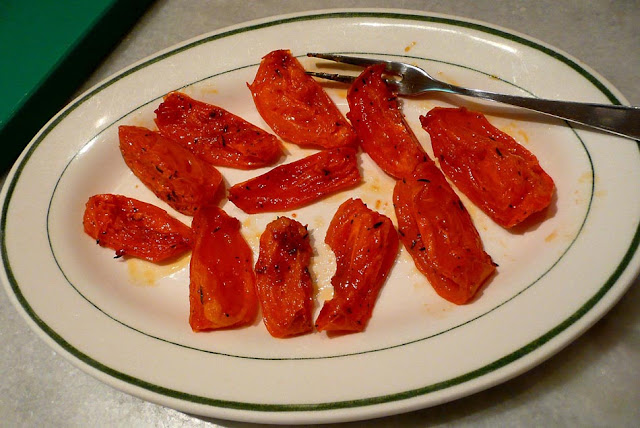 Place the wedges on a baking sheet — on a silicone pad or parchment paper, so they won't stick — and put the pan in a slow oven for 2½ to 3 hours. I "roast" them at 90 to 95 ºC — that's between 190 and 200 ºF. The tomato liquid slowly evaporates, the oil and seasonings penetrate into the tomato flesh. You end up with little sweet morsels that you can eat almost like candy. 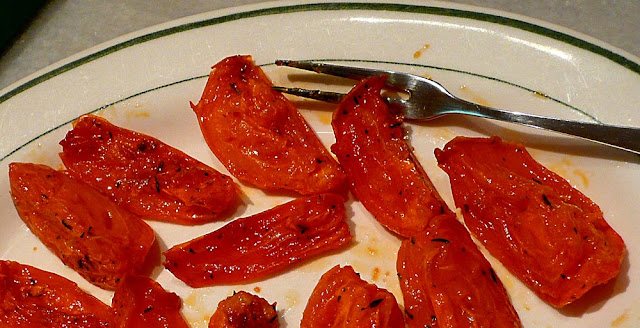 Tomates confites can be served as a side dish, in a salad, as a kind of sauce for pasta, or — the way I like them — on little slices of bread or toast spread with soft, fresh goat cheese — a Selles-sur Cher cheese, for example — or Philadephia-style cream cheese. Make a lot of them, because they go fast. You can keep them in the refrigerator for a few days, by the way.
Posted by Ken Broadhurst at 09:12