« Portes ouvertes » means "open house" — word for word, "doors open." That's waht we have, or did, yesterday, but not in the classic sense. After nearly six months of living with the French doors that separate our living room from the stairs shut tight, we threw them open again. Now we don't have to go through the kitchen to get into the living room

Of course, before we threw the doors open we had to move two big pieces of furniture. They'd been sitting there in front of the French doors, inside the living room, since before the work on the upstairs began last April. One piece was easy to move. We just had to slide it about 10 feet across the tile floor to its old spot by the guest room door. 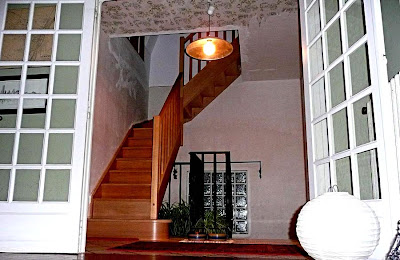 The new view from the living room — you can see that
I still haven't finished taking the old wallpaper down
and we haven't painted the walls yet.
The other piece of furniture had to be taken downstairs. It used to sit where the stairs are now, so obviously it needed a new home. And before we could take it downstairs, it had to be emptied. It had filled up with kitchen things over the seven years since we acquired it. That was some work, but it is now done and the pine cabinet is downstairs where my desk and computer used to be. 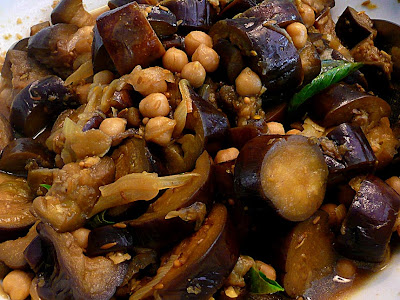 The curried eggplant also included
a fresh jalapeño pepper from the garden.
To celebrate, Walt made us an eggplant and chickpea curry for lunch. Delicious. Eggplant from the garden of course, and basil too.
Posted by Ken Broadhurst at 07:30