The garden is really producing good vegetables now. Our weather has been cool, sunny, and dry for a couple of days, and now it is supposed to get warm again. These are perfect conditions for vegetables to ripen in.

Walt went out and watered some yesterday. He said he was surprised at how dry the ground was. He also picked a lot of eggplants, tomatoes and squash. I made a gratin d'aubergines et tomates using mozzarella and parmesan cheeses. It was a good lunch. 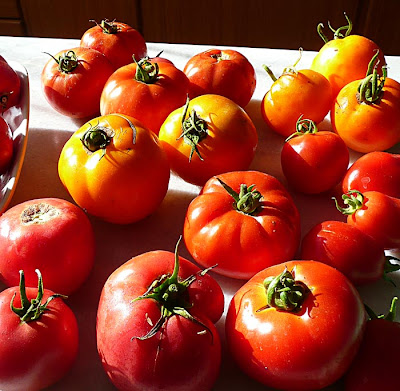 Tomatoes fresh from the garden
I also ordered a new laptop computer yesterday. I got it from an Amazon-affiliated company in England that doesn't have a policy against shipping computers to addresses in France. It will have the clavier anglais — the British keyboard — that I want and need.

It has also occurred to me that it will also have a British-style power plug, and I don't have an adapter for that. I have plenty of adapters to make American electrical plugs work in French wall outlets. I'll have to scramble to find a British one. With any luck, this won't turn into a mega-hassle. Ah, the joys of 21st century life! 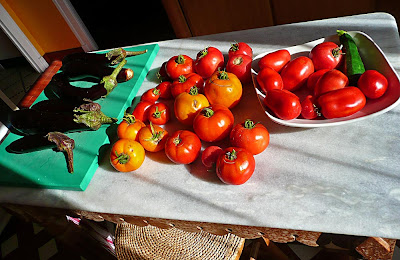 Tomatoes and eggplants
I got a call yesterday afternoon from a Swedish journalist who is based in Brussels. He said he had seen my blog and wanted to talk to me about a story he is doing on the "events" in Saint-Aignan in late July. You remember, it was local gens du voyage (gypsies) who staged a mini-riot in town one Sunday morning to protest the shooting of one of their friends by a gendarme. They cut down some old trees and helped themselves to bread and pastries in a neighborhood boulangerie.

The reporter from Brussels said he has been having a lot of trouble getting anybody in Saint-Aignan to talk to him for his report. He called the mayor but got nowhere. He asked me if I could put him in touch with people who had first-hand knowledge of what happened that Sunday morning, but I couldn't. I told him some things I've heard on the dinner-party circuit (doesn't that sound chi-chi?) but I couldn't be more helpful than that.

It's amazing how this blog brings me into contact with so many different and interesting people. 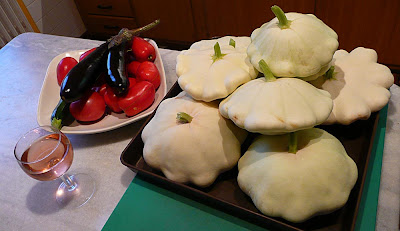 We really need to figure out what to do with all these patty-pans.
Now that the painting is done upstairs, I have to get busy in the garden again. I have collard greens to plant for a fall crop. And turnips, thanks to an American friend who lives down the road and brought me some seedlings a couple of days ago.