The other day I noticed a container of fresh chicken livers in the fresh poultry section of the supermarket. The label on the container said foies de poulet, so they really were chicken and not turkey. Often what you find is "poultry livers" — foies de volaille. And that's okay too — turkey livers are as good as chicken livers. Duck livers might be even better. 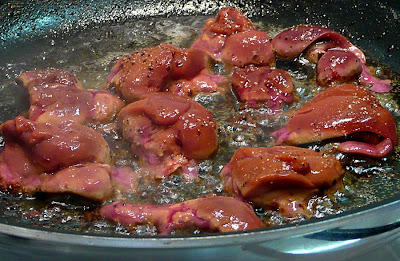 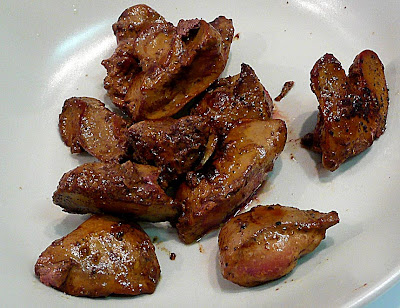 ...poêlés au beurre
It had been a long time since I'd cooked chicken livers. Duck gizzards, yes — they're good in salads. So are chicken livers, but with the cool damp weather we're having right now, and given the number of tomato salads we've eaten over the past month, I decided I wanted to eat the chicken livers hot, in a sauce.

Here's the recipe I came up with:

Mix the mustard into the cream (crème fraîche if you can get it) in a bowl. When the livers are lightly browned, pour the cream sauce over them, pepper them generously, and let them cook for a few minutes on medium heat so that the mustard cream sauce thicken. Add salt to taste.

Serve the chicken livers and sauce with plain steamed rice, or with mashed, fried, or sautéed potatoes. Sprinkle chopped parsley over all.

The livers I bought seemed awfully large to be chicken livers, but I didn't mind. I cut them into bite-size pieces before I sautéed them. The package weighed only about ¾ lb., actually, so I reduced the other quantities proportionally. 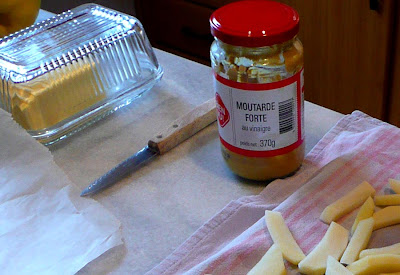 Use good Dijon mustard.
A small portion of such a rich dish is sufficient, by the way, and it's very satisfying. We had ours with French fries, because we grew so many potatoes this summer. A dish with a cream sauce like this one needs to be followed by a good green salad in a tart vinaigrette dressing.
Posted by Ken Broadhurst at 08:05