Noyon — a cathedral and a crowd

Did anybody notice that the name Noyon is a palindrome? Noyon is a town of 15,000 located in the Oise département north of Paris. It was founded during Roman times. It has a cathedral.

A cathedral isn't just a big church. The term has a specific meaning. A cathedral is a church that contains the "seat" of a bishop. In fact, "cathedral" derives from the Greek, through Latin, meaning "chair." Usually, cathedrals are located in large cities in France — Paris, Rouen, Reims, Orléans, Tours — but not always. Chartres isn't a big city, and neither is Noyon. 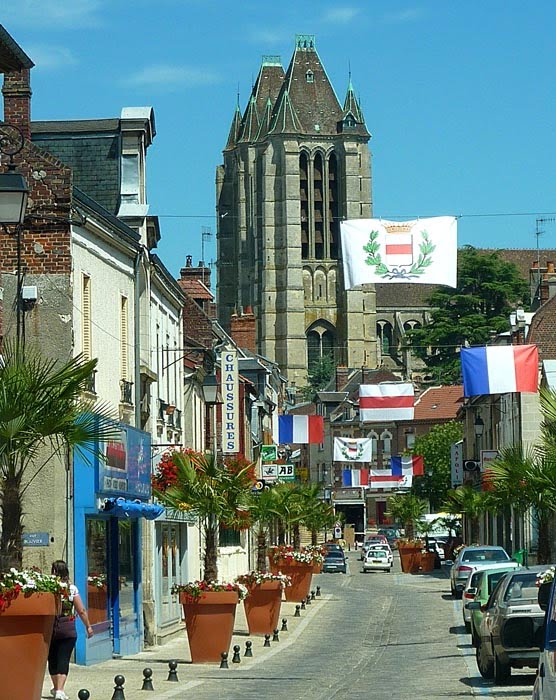 “Downtown” Noyon and the cathedral
It was Saint Médard who established Noyon as a bishopric, or diocese. That was in the year 531 of the current era — nearly 1500 years ago. Médard de Noyon, as the saint was known, was famous for having given his clothes to a beggar, and he always showed great compassion for the poor.

In the year 768, Charlemagne was crowned king of the Francs in the cathedral at Noyon. Two hundred years later, Hugues Capet was coronated at Noyon as well. So Noyon has played important parts in French history. 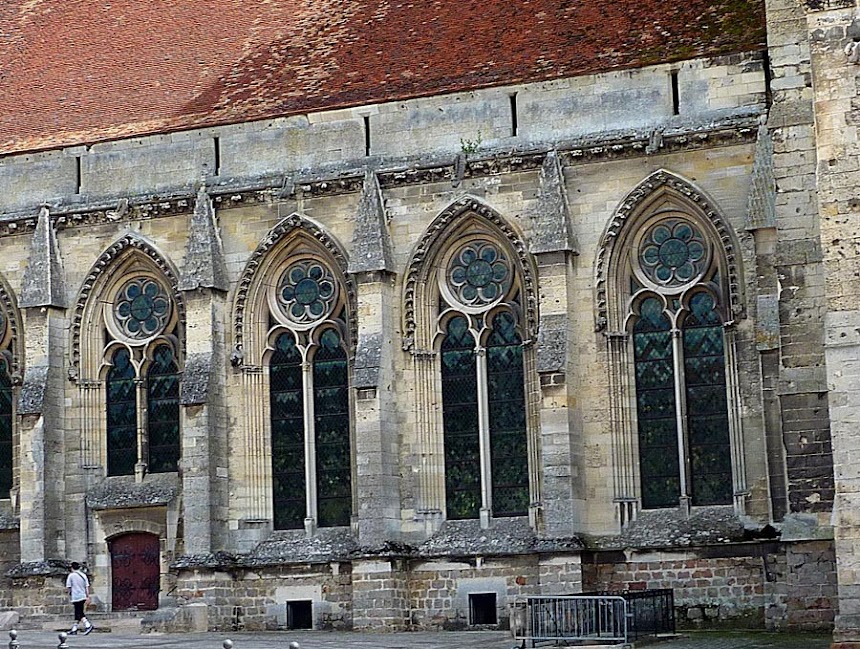 Oh, I forgot to mention that Noyon is also the birthplace of the famous Protestant reformer and pastor John (in French, Jean) Calvin. He was born in 1509, and his father was employed as the cathedral notary by the bishop.

Today Noyon seems like a backwater, with this fantastic old church in the middle of it. You can tell it hasn't gained in importance over the last 1000 years or so. 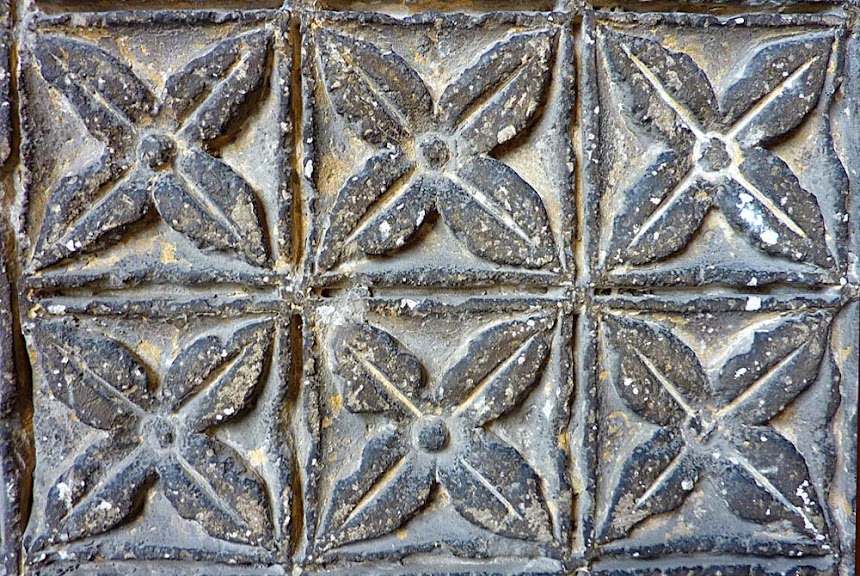 The first time I went to Noyon was in September 1994. Walt and I were staying in Paris, as were two people Walt knew from graduate school at Berkeley. A. and V. were funny, though not necessarily by intention. They had rented a little apartment on the rue Monge in the 5th arrondissement, right off the place with the big market on Sunday mornings. 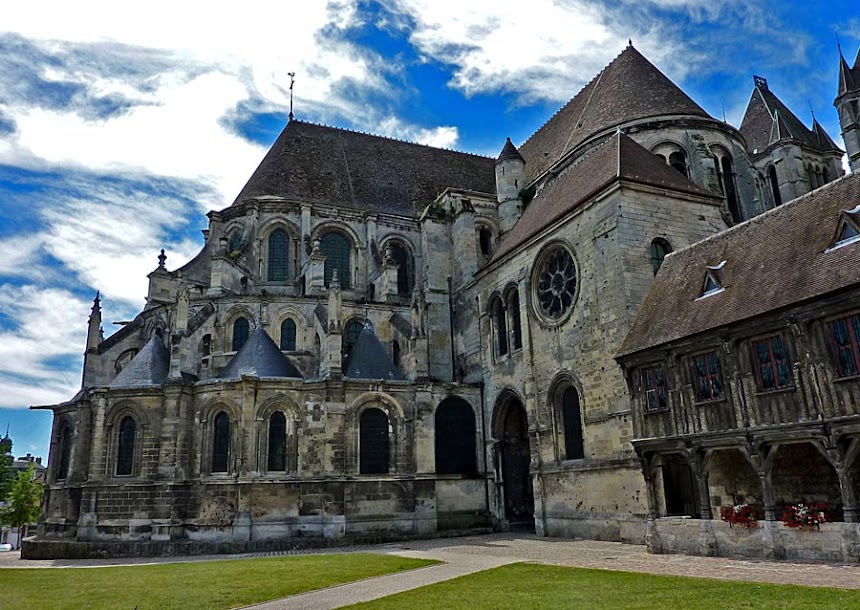 After being there for a few days, they told me and Walt they thought they were the only people living in the building. They said it was so quiet that they figured the rest of the apartments were unoccupied. Besides, their rental apartment was on the top floor, and they never saw anybody at all in the stairwell when they were going up or coming down.

I told them that was normal in a nice Paris apartment building. The residents are very quiet and discreet. In that building on Rue Monge, there were name plates on all the doors, and the stairway was immaculately maintained. I'm sure dozens of very quiet people were living there. It wasn't like it was August, after all, and everybody was on vacation. It was mid-September. 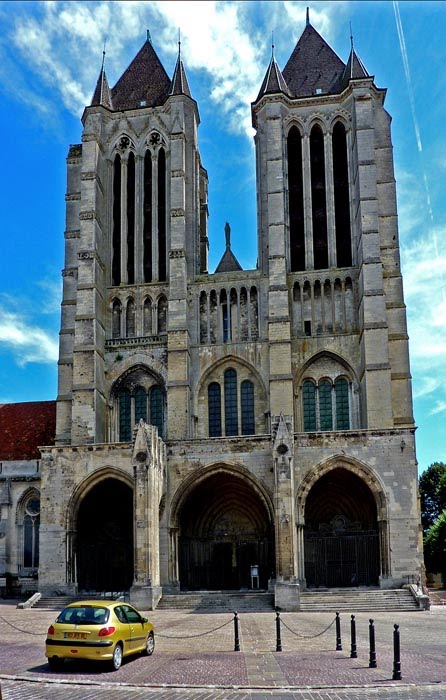 La cathédrale de Noyon
I remember V. really wanted to go to Eurodisney. I didn't want to do that, so we let them go on their own. They came back reporting that the Disney park had the cleanest and nicest bathrooms in France! I thought, well that must be some attraction then.

One night we went to a restaurant called Chez René, on the east end of the Boulevard Saint-Germain, for dinner. It was crowded and noisy, and we got about the last table available that evening. We were crammed into a corner, sort of under the coat rack. We all decided to have coq au vin, which was served in a very dark, almost black sauce. It was amazingly good, and A. and V. raved about it for the next 24 hours. 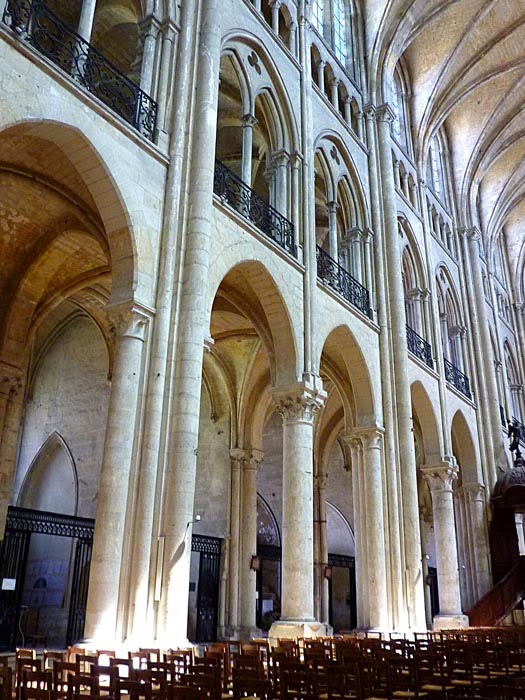 Noyon cathedral
"How do they make that kind of sauce?" they kept asking me. I told Walt I had an idea of what went into the sauce, but I really didn't want to tell A. and V. They wouldn't like the idea. Finally, late in the afternoon the day after the dinner, I decided I had to say something to satisfy their curiosity.

"How do they make the sauce so dark? It was so tasty, like nothing we've ever had before," they kept saying. Until I told them that the classic coq au vin — chicken braised in a red wine sauce with onions and bacon chunks — is made with red wine, of course, and chicken broth. And then it is thickened, traditionally, with the blood of the chicken (or rooster, actually). They didn't talk about it any more after that. 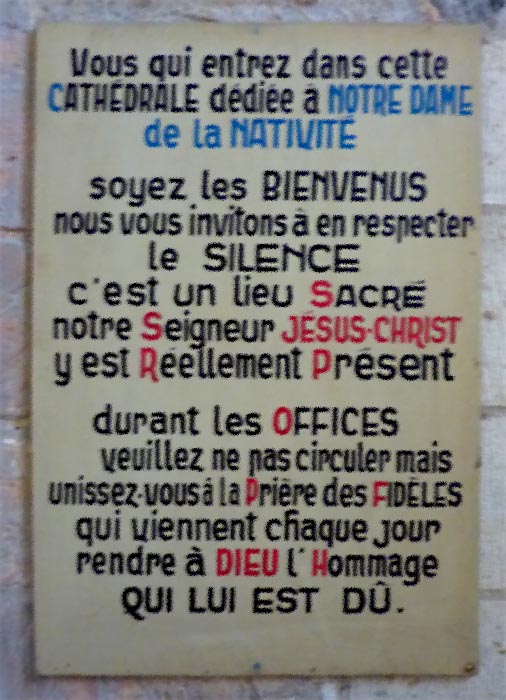 Then one Saturday the four of us rented a car and went on a driving tour north of Paris. We first went to Beauvais to see the fantastically large cathedral there. A. was an architecture student like Walt, and the cathédrale de Beauvais is an important landmark, being the tallest Gothic church in France.

After we saw Beauvais, we headed east toward Laon, an ancient fortified town of 25,000 built on a hilltop around another major cathedral. Walt had visited Laon a dozen years earlier, when he was a student in Paris. None of the rest of us had been there. It was a two-hour drive from Beauvais, but we had rented a VW Golf for the day and were just enjoying riding around. It was a nice change from all the walking we had been doing in Paris. 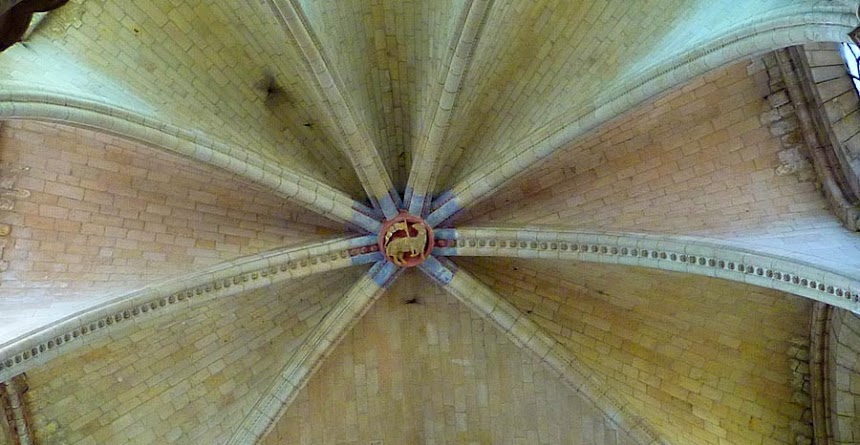 Between Beauvais and Laon lies Noyon, but most likely we would never have known about it if CHM hadn't told us that Noyon was worth a visit. We drove into the town around 1:00 p.m., and we went straight to the cathedral. It's about the only thing to do in Noyon, as far as I know, and the cathedral is so big that you can't miss it. I have no pictures from that pre-digital-camera era.

That Saturday 16 years ago, the streets of Noyon were deserted. The one in the first picture in this post, a pedestrian street and obviously the town's business district, seemed especially deserted. "Where is everybody?" V. and A. wanted to know. "Is the town abandoned?" It was eery. We went ahead and had our picnic in the little garden next to the cathedral. Then went inside to see the interior of the building. We had the place to ourselves. 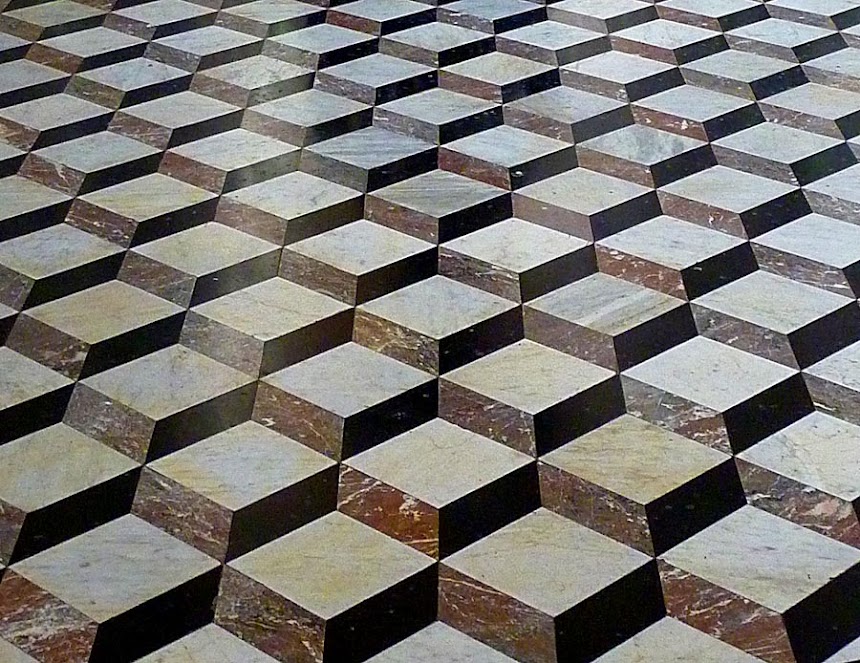 As we were getting ready to leave Noyon and drive the 20 miles over to Laon, we saw that at 4:00 p.m. the main street was fairly mobbed with people out taking a stroll. There were older people, kids, couples with babies, and just about everybody you could imagine. The atmosphere was cheery and lively, and the September afternoon was warm and beautiful. It might well have been one of the last nice Saturday afternoons of the year, and people were taking advantage of the good weather. 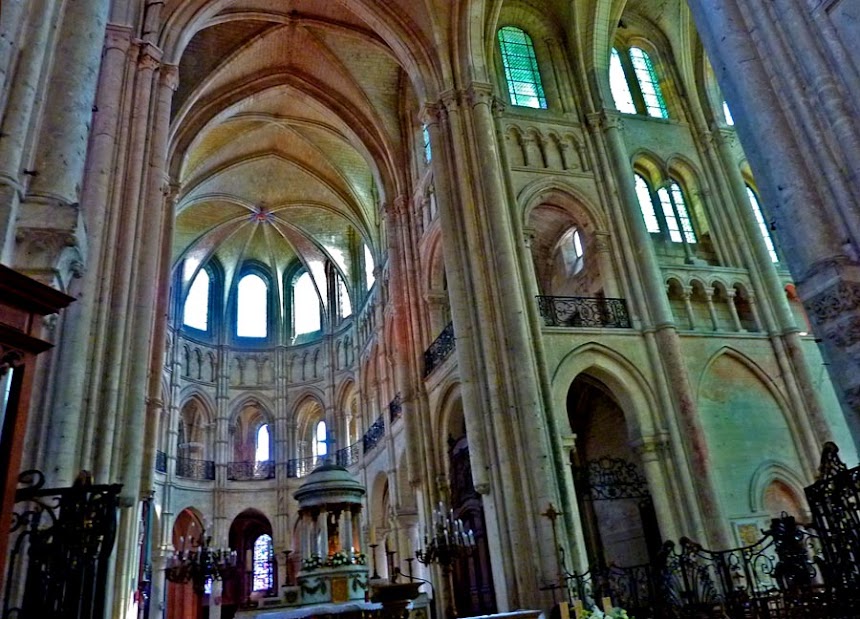 Where had all those people come from? From their dining rooms, I'd say. We had arrived in Noyon at lunchtime, and all the citizens of the town were à table, having their big Saturday meal. That's what it's like in the French countryside. At noon, nobody much is out. Pas un chat, as they say. The businesses are mostly shuttered, and everybody's eating lunch.
Posted by Ken Broadhurst at 06:49