Yesterday we brought in about the last of our sweet corn — that's maize or maïs — crop. It was 10 more ears, most of which were fully formed and pretty. Two or three were kind of stunted or only partially covered in kernels, but that's not bad. Sweet corn was a garden success this year.

Last year we planted only 6 or 8 stalks of corn, and that wasn't enough. Corn needs to be planted in quantity and the stalks need to be close together to make sure that cross-pollination takes place. You only get one or two ears per plant, so to make it worthwhile you have to plant a lot of it. We had about two dozen sweet corn plants, of two or three varieties, this year. 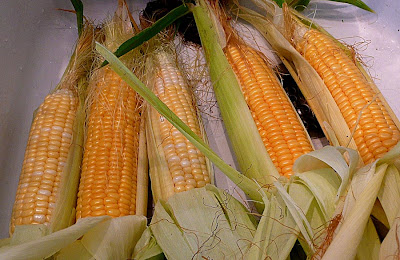 Some of the ears of corn that we harvested yesterday
That gave us enough corn so that we could really enjoy it in August and September. Sweet corn is not something you can find easily in France. Eating corn on the cob or corn soups isn't part of French custom. About the only way you ever see corn, in fact, is in salads — often in something called a salade mexicaine, with corn kernels and tomatoes. And that corn nearly always comes out of a can. They don't even sell frozen corn in the supermarkets. 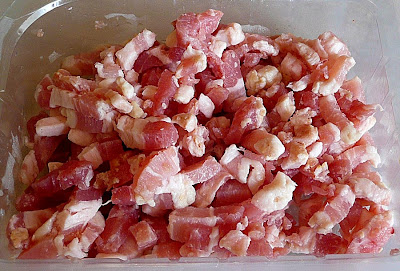 These are pork lardons — smoked, salted, or plain —that you
can buy in packages at the supermarket in France.
We've eaten corn on the cob a half-dozen times now, and Walt made a batch of creamed corn a couple of weeks ago. Yesterday I decided to make corn chowder for lunch, with bacon and potatoes in it. I was inspired by a recipe in an American book called Cooking Across the South, published in 1980. 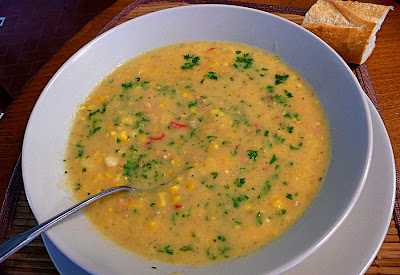 Instead of powdered cayenne pepper, we included a
sliced fresh cayenne pepper from the garden
in the soup. The herb is parsley.
I think you could make this chowder with canned or frozen corn kernels, but fresh is obviously better. You cut the kernels off the cob with a knife, standing the ear of corn on its end and slicing downward. Then scrape the ear to get all the good pulp and juice for the soup. Add as much water as you need to get a soupy consistency.

In a heavy kettle or pot, fry the pork lardons (diced ham or bacon) in a little butter until lightly browned; add onion and garlic, and cook until tender.

Add corn, potatoes, and corn meal, and stir well. Add seasonings to taste, and cover with boiling water. Add more or less sugar, to taste, depending on how sweet the corn is.

Some recipes call for using flour or cracker crumbs as a thickener in this kind of chowder, but to me it makes sense to thicken it with finely ground corn meal, if you can find it. Another way to thicken the soup is to use a potato masher to break up the cooked potatoes before you serve it.
Posted by Ken Broadhurst at 08:00