There's Cabernet Franc, the grape of Chinon, Bourgueil, and Saumur-Champigny wines, all produced in the Loire Valley between Tours and Angers. Here in eastern Touraine, in the Cher River Valley, a lot of Cabernet Franc is grown and made into varietal or blended wines too. From what I've read, Cabernet Franc is the grape that is closest in character to the wild ancestor of all the Cabernets. It's used as a blending grape in Bordeaux. 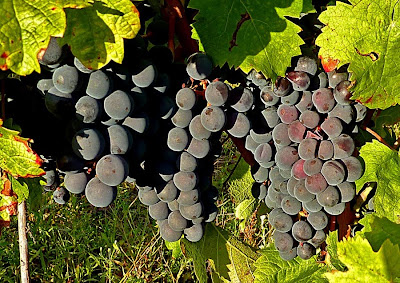 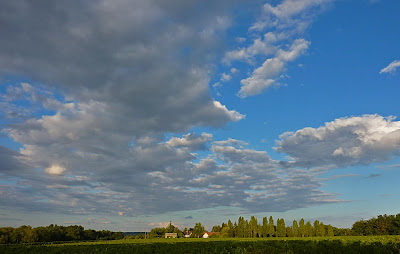 The Renaudière vineyard in mid-September

Sauvignon Blanc is also a Cabernet grape. It's the quintessential white wine grape of the Loire Valley, from Sancerre west to Tours (the Touraine whites, but also Quincy, Reuilly, and Pouilly whites). It's also a much-used white wine grape in New Zealand, South Africa, Australia, and California. It makes steely, grassy white wines. 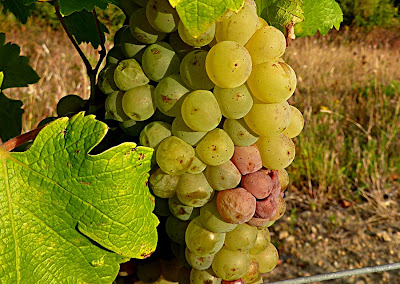 Sauvignon Blanc, Chenin Blanc, and Chardonnay grapes
are grown at La Renaudière. One day I'll learn to tell the
grapes, and not just the wines, apart.

Finally, there's a Sauvignon variety that 80-something Jacques Denis, who has tended the vines at la Renaudière outside Saint-Aignan his whole life, and who probably helped plant many of them, told me, a couple of months ago, that he calls Sauvignon Rose. That's rose without an accent, not rosé — one syllable, not two. Rose means pink in French. I searched for Sauvignon Rose on the internet for a while, but found nothing. 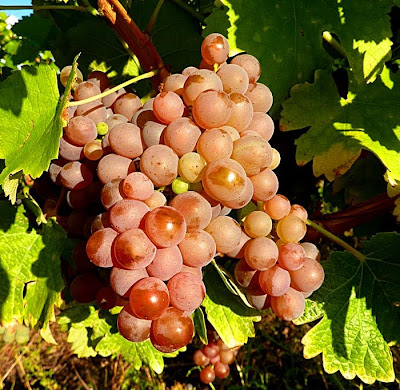 There are several rows of the so-called Sauvignon Rose grapes right out behind our back gate. Just this morning, I found something that leads me to believe Sauvignon Rose might be another name for a variety otherwise known as Cabernet Gris — "Gray" Cabernet. Vin gris is a name given to very pale vin rosé. It seems that Cabernet Gris is especially well adapted for the production of sweet wines — vins moelleux ("tender" or "mellow") or or even liquoreux (the sweetest, with more than 50 grams of residual sugar per liter). 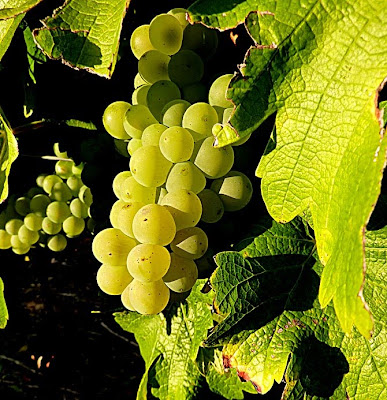 By the way, Jacques Denis is out hunting this morning. Walt talked to him, and Callie went up and kissed him. She especially loves Jacques, for some reason. Whenever she sees him in the vineyard, she runs to greet him. With other people who work the vineyard, Callie is much more standoffish. Jacques told Walt that he and the other local hunters are after foxes this morning.
Posted by Ken Broadhurst at 08:35