More about tomatoes and grapes

The tomato wedges dried for a total of 8 hours over two days, but they also spent the night in an oven that was just gradually cooling down after I turned it off and went to bed. I kept the temperature between 80 and 90 ºC yesterday and the evening before, turning it down slightly toward the end of the drying time so that the tomatoes wouldn't burn or get too crispy.

And no, I didn't eliminate the seeds and pulp from these tomatoes as part of the preparation. For one thing, there were just to many of them and it would have taken too long. For tomates confites, it's better to do roast the flesh, sans the seeds and watery pulp, because they will be consumed while they are still juicy. You don't want them too juicy. For dried tomatoes, it doesn't matter, because they really dry out. That's my take on it. 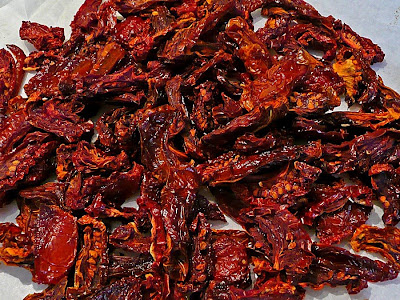 Oven-dried tomatoes
I'm pretty happy with the result of the tomato-drying operation. The wedges really shrank, and they are leathery, not crispy. Toward the end of the process, I started removing the wedges that looked dry enough, letting others stay in the oven a while longer, to get everything done the same. I'm hoping the dried tomatoes keep in jars down in the cellar over the winter. It's cool down there, but not as cold as in the refrigerator. The oven-dried tomatoes I made last year kept fine in jars stored in the cellar. 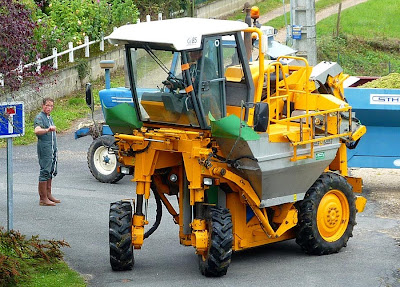 Bruno and his team with their harvester and tractor & trailer
Bruno Denis of the Domaine de la Renaudie and his crew came in yesterday and harvested a parcel of Chardonnay grapes just out behind our house. It was a chilly gray day, with quite a bit of rain in the morning but less in the afternoon. I know the grapes harvested yesterday were Chardonnay and not some other white wine grape because Bruno's father, Jacques, told me last June that that's what those particular grapes are. They are probably used mostly in sparkling Touraine wines. 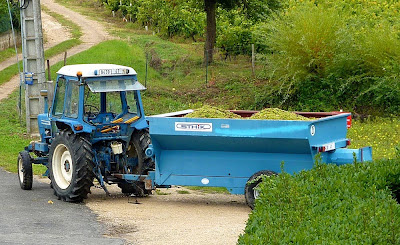 A trailer full of Chardonnay grapes
The red wine grapes are still out on the vines. The weather is improving slowly. Today the high is supposed to hit 65 or 66 ºF, according to MétéoFrance, and it should be basically dry with maybe a light shower. The house is staying fairly warm so I don't feel the need to turn on the central heating yet. Walt made a fire in the wood-burning stove again yesterday and after an hour or two I could feel the warmth up here in the loft, where my desk is.

With any luck, the current warming trend will continue and we won't need to start burning fuel oil for a while. It's not even October yet! Let the cold weather wait.
Posted by Ken Broadhurst at 07:25