Okra (in French, gombos) is one of those vegetables like beets (betteraves) or Brussels sprouts (choux de Bruxelles) that really get people going. Writing about them is almost like accepting a dare. Admitting you like them is like admitting you are weird. Well, I love them all.

Sometimes I think my taste buds must not be very well developed, or very sensitive. At the same time, I really enjoy good food. Or at least what I consider to be good food. I especially like foods that are cooked slowly and carefully, so that they become moelleux, onctueux, confits. The cooking has to be done carefully, but thoroughly. That applies to vegetables, meats, and fruit. 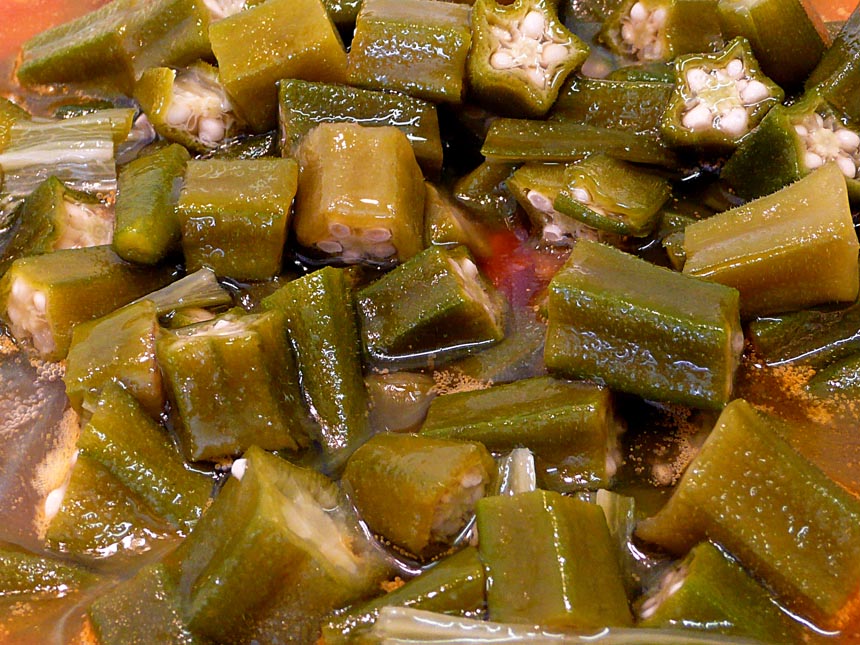 Okra pods, blanched in salted water and then sliced
One thing you can say about okra is that it is onctueux. In the context of food, that means doux (tender), moelleux (rich but mellow), crémeux (creamy), and velouté (velvety).The problem is, most people get stuck on the idea of okra's sliminess. That means they aren't getting past a prejudice, and probably that they aren't preparing the food in a way that emphasizes its best qualities.

Also, okra smells and tastes good. Yesterday when I was cutting up frozen okra pods that I had blanched in salted water — I only wish I could find okra fresh here in Saint-Aignan, or grow it — I said to Walt that the aroma of it reminded me of fresh sweetcorn — a.k.a. Indian corn, maize, or maïs. I don't think he agreed, but still — there's something very herby about it, and slightly sweet.

The French name for okra is « gombo », which is derived from a Bantu word, from Angola in Africa. It of course also gave its name to the Louisiana Creole seafood and chicken stew called "gumbo," which is thickened by the thick, sticky liquid inside the okra that cooks in it. The term okra is also of African derivation, coming from languages spoken in Ivory Coast and Ghana. 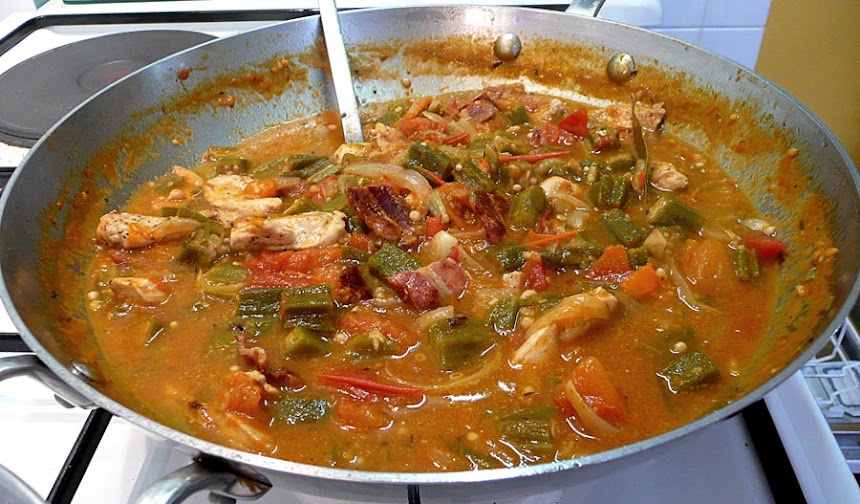 This is the pan of okra and tomatoes I cooked yesterday. I added
an extra ingredient: some sliced and stir-fried chicken breast meat.
When I lived in Paris in 1975, a Greek friend cooked okra once. I was surprised to learn okra is appreciated in Greece and other eastern Mediterranean countries. My Greek friend called it bamies, which she pronounced as [BAH-myess] I believe. According to the article on gombo in French Wikipedia, okra enters into the preparation of numerous Creole, African, and Japanese dishes. 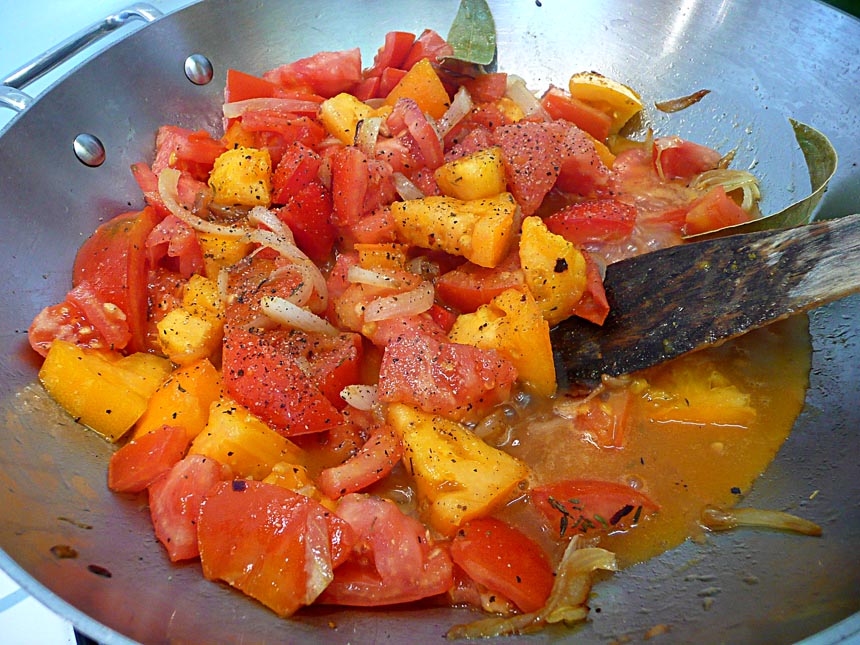 Tomatoes from the garden, cut into chunks
and cooked with onions in bacon grease
In the U.S., okra is a Southern specialty. It came to the South with African slaves and, according to one book I have, was "in use" in America by at least 1780. One Southern cookbook author says it's probably true that okra is an acquired taste, but, he says, "if so, I acquired mine at a very young age." Well, I think I did too.

The two ways to acquire a taste for okra is to have it either perfectly fried or stewed with onions and very flavorful tomatoes. Each method reduces the impression of sliminess that so many people find off-putting. 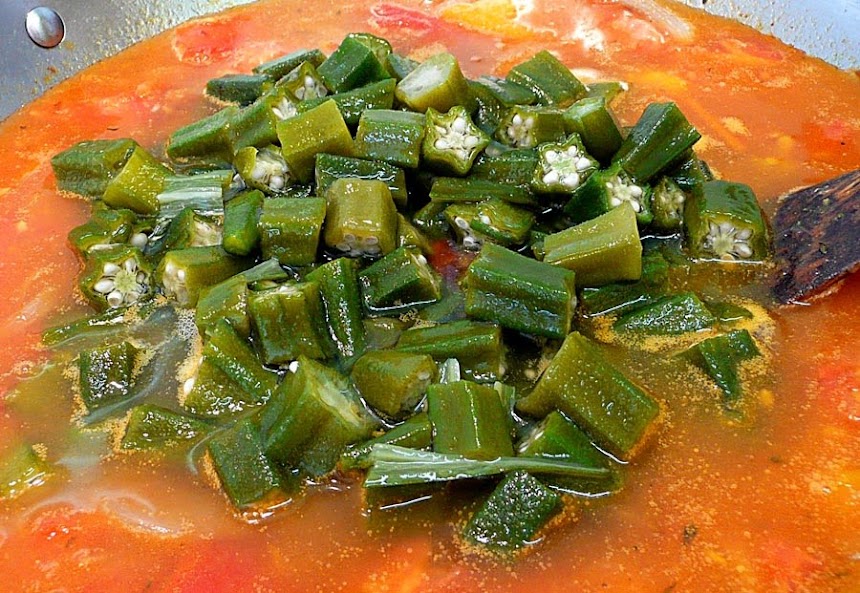 Adding blanched okra to the cooked onions and tomatoes
Frying okra involves rolling each piece in good cornmeal and dropping it in very hot oil to cook it until it is golden brown. Another Southern book I use says that when you fry okra that way, "something miraculous happens. Everything about the vegetable that is unattractive disappears," the author says, "and a crisp, crunchy, dainty, and delicious morsel takes its place." The same author cites the following anecdote that appeared in the Arkansas Gazette in 1979:


Northern people are funny about food. There is a documented case in a Little Rock household of a transplanted New Yorker who declined a serving of fried okra on the ground that he was a vegetarian. The man seemed to be under the impression that each segment was a tiny crustacean scraped from the bottom of an Arkansas River towboat. It should be noted, in fairness, however, that the chances of the man's partaking of this Southern delicacy could not have been helped by the sight of his host spitting into the grease to make sure it was hot enough.

I don't spit into my okra and tomatoes when I cook them together. It's a very simple recipe. Fry some bacon in a pan. Take the bacon out when it's crispy, and set it aside to cool. Save the bacon grease and cook a couple of sliced or chopped onions in it until they are soft and slightly browned. Chop up four fresh tomatoes and add them to the pan, with any juice they release in the chopping. 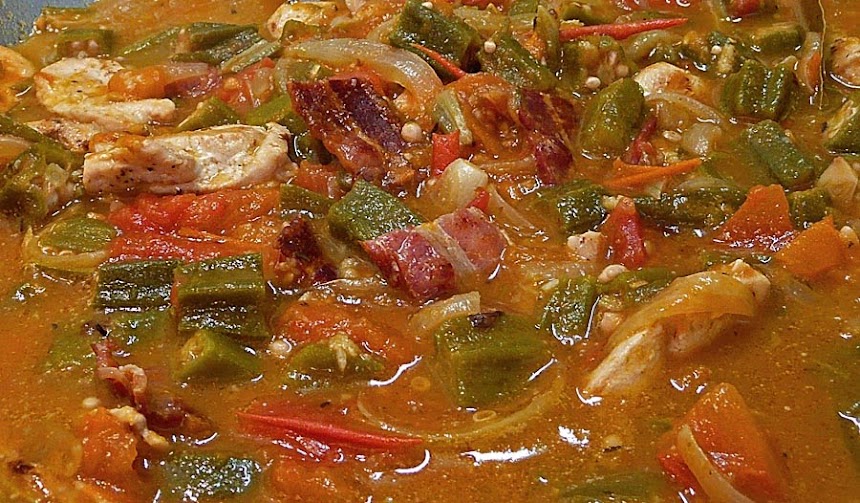 Bacon, chicken breast, okra, onions, and tomato
stewed briefly in tomato and okra "juices"
When the tomatoes have started cooking down, add about two cups of fresh okra, sliced into small pieces (see my pictures). Or use about a pound of frozen, sliced okra, which you can precook in salted boiling water if you want. Don't throw out the water the okra is cooked in — add it to the tomatoes. The okra water (a "silky" liquid, wink wink) will combine with the slightly acid and slightly sweet tomato liquid to make a nice velvety sauce.

Crumble the bacon or break it into pieces and add it to the pan. Cook the tomatoes and okra together on medium to medium-low heat until the sauce has reduced and thickened to your taste. Don't forget salt and pepper, and pinches of hot red pepper flakes, dried thyme, and ground cumin can add nice flavors too. Serve the stewed tomatoes and okra with cooked rice, millet, wheat berries, or pasta.

Here's one final quote. I took it from a web site on Texas cooking:


People try to be kind to okra by describing its texture as "silky," a euphemism, to be sure. There's no getting around it: okra, especially stewed okra is slimey. There should be another word that does it justice, but I'm afraid the English language is lacking. But I refuse to defend okra. It's delicious — so much so that I enjoy that slimey texture. There's an old one-liner about okra that goes like this: When I was a kid, I ate so much okra I couldn't keep my socks up.