Francos and anglos, apéros and dinner

We had a francophone apéritif and an anglophone dinner yesterday. Unfortunately, the weather turned out damp and cool, with gray skies all day. We didn't get enough rain to do the garden any good. We got just enough drizzle to spoil our plans to have dinner outside under the « le barnum » — that's what the garden tent is called. I don't know what it's called in English. A big top? A tarp? A gazebo?

Anyway, the mayor and her husband invited us, our American friends who just moved into a house nearby, and our across-the-street neighbors for a glass of wine and some finger foods before lunch. A., the mayor, is a very good cook, and she had made three or four different little dishes to go with a chilled bottle of the local Touraine rosé sparkling wine.

A. is the mayor of our village, which has a population of about 1200. She just happens to live in our little hamlet, which is made up of nine houses and fewer than 20 residents.

Among the apéro foods A. served were tiny raisin pizzas with blue cheese melted on them — almost crackers, but in a little pie shell. Another was a little shot glass filled with raw chopped tomato and zucchini (courgette if you're not American) and cooked quinoa, in a balsamic vinaigrette sauce. There were little anchovy fillets folded in half, served on a cocktail pick, and bathed in a spicy lime juice dressing. And there was cubed fresh cantaloupe on picks, plus little spoons filled with oniony, herby cream cheese topped with a little slice of smoked salmon.

We spoke French. The mayor's husband speaks some English, but as far as I know the other neighbors do not. The newly arrived Americans enjoyed the chance to practice their French and said they preferred to speak French rather than English in such situations.

Afterward, we came back over to our house for Sunday dinner and an afternoon together, with frequent glances at the TV to see whether Nadal or Soderling was going to win this year's French Open tennis tournament. English friend S. came for dinner too, so there were five of us plus three dogs! Bertie the Black Cat stayed out of sight for the afternoon. 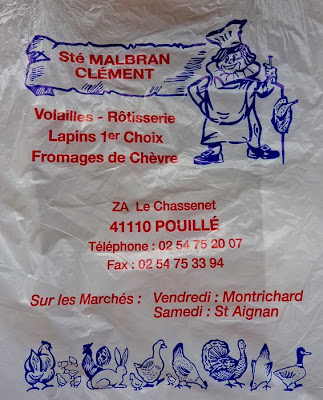 This is the only picture I took yesterday.
I was too busy to worry about the camera.
For dinner I had cooked a « pintade » — that's a guinea fowl — on the rotisserie in our oven. Walt bought the bird at the Saint-Aignan market Saturday morning, from our favorite poultry vendor there.

When we roast poultry or meat on the rotisserie, I always put a baking dish half full of water on a rack directly under the meat, to catch the drippings. If you don't, roasting meat on the spit can make quite a mess of your oven and can also really smoke up your kitchen.

This time, I had a new idea. Instead of just a pan of water, I set a pan of diced, peeled potatoes, with a little water in the bottom, right under the bird. That way, the potatoes cooked as the pintade did, and bathed in the fat and olive oil dripping down on them. I also tossed in four or five unpeeled garlic cloves and three big bay leaves.

The bird and potatoes were cooked before we walked over to the neighbors' for apéros at 11:30 I just turned off the oven and let it sit while we were gone, for about two hours. J. the American, who likes to cook on a grill, said I should make sure the bird was turned breast side down on the spit, so that the breast wouldn't dry out. That was a good idea.

The pintade was perfect, in fact — even if I do say so myself. The meat was moist and nearly falling off the bone — very easy to carve — and the skin was beautifully browned. It was all very good with the spicy cherry sauce I made a couple of days ago. The potatoes were delicious too. Afterward, we had green salad with a yogurt-cucumber dressing, some goat and cow's-milk cheeses, and a slice of cherry clafoutis that Walt made the day before.

We spoke English, of course, but we talked about life here and local customs, so our English included a liberal sprinkling of French words and expressions. Everybody went home after the tennis match ended (Nadal won), at about 6:00 p.m., and then I took the dog out for a walk. Voilà. Life is good.
Posted by Ken Broadhurst at 08:20