Mostly good news, but some bad

Which do you want first? Okay, let's go positive.

Good news: today marks 27 years that Walt and I have been living as a couple. We met in Paris in 1981. Then we moved back to the States and got an apartment together in Washington DC in June 1983. From 1986 until 2003 we lived and worked in California.

Tomorrow will be the seventh anniversary of our arrival in France to start this new life. It's still hard to believe. 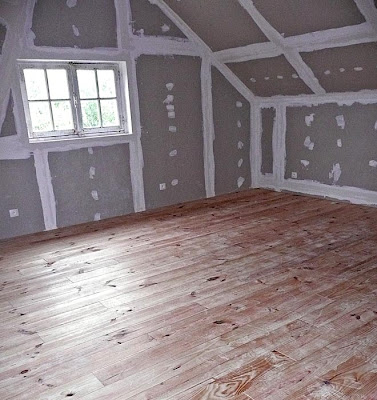 The new floor...
More good news concerns the attic conversion: Jacques and two of his young workers showed up yesterday morning. They arrived with a truckload of pine boards — that's the flooring for the attic. It's tongue-and-groove. And the two workers started nailing it down. The nails go into the groove on the edge of each board, so they are not visible in the finished floor. 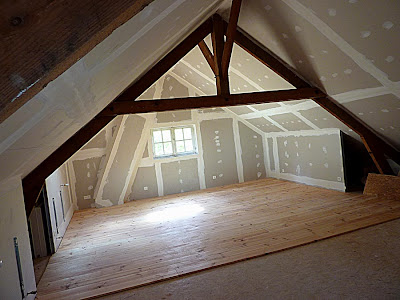 ...is about half done.
As Walt said on Facebook, I think, the crew had laid down a few boards over the sub-floor to see how they were going to fit together. I went up and saw them, and they looked fine to me. I came back downstairs and told Walt he should go see what they were doing, just to be sure. He did. When he came back downstairs, he said: "The had the boards laid down back-side up. They were going to put them in the wrong way."

There's a top side and bottom side, because the planks are chamfered. In French, ce sont des planches avec chanfrein. What that means is that the top edges of each board are beveled, so that there is a shallow groove between the boards where they fit together.

Pine boards with chamfered edges
Now for the bad news. Our English friend S. called late yesterday afternoon. “I have some news about Coco,” she said. Coco is the masonry/tile/drywall specialist who has been the senior member of the work crew. Last year he put down new tile for us on our front terrace. Over the past two months, he has done all the plasterboard walls up in the attic, as well as putting in the new staircase.

Anyway, I told Starr that Coco hadn't come to work here that morning but that the laying of the floor was proceeding apace, thanks to Jacques and the two guys who work for him. “Okay,” S. said, “but here's the news: Coco was doing some work at his own house this afternoon. Unfortunately, he fell and got his legs tangled up in a ladder. He has suffered a nasty broken leg. Jacques called it « une fracture ouverte ». I'm not sure exactly what that means, but Coco is in the hospital over in Romorantin.” 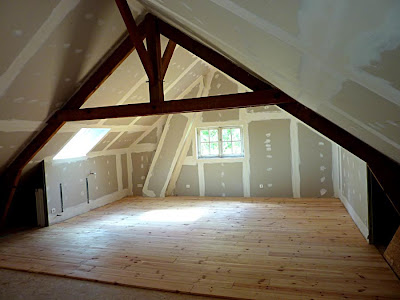 A view from a different angle
Poor Coco (his real name is Jacques too). He's a man who is always all smiles, who whistles while he works, and who is a craftsman. He is proud of his work, and has a right to be. Now he'll be laid up for I don't know how long.

Now some people who read this blog have said that we should leave that last wall, the one directly over the stairs, in its natural brick state. Well, it looks like it will stay that way for at least a while longer, unless the other Jacques finds another drywall man to finish the job. I don't know who will install the closet doors.

I guess we'll be able to start varnishing and painting as soon as the floor is finished. 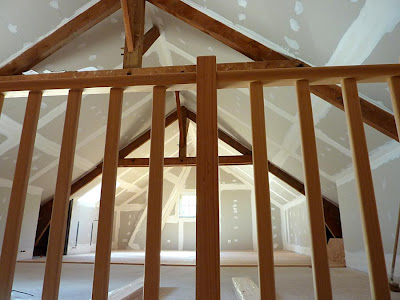 View coming up the stairs
Dry. That's what we wish the weather would be. It's supposed to rain again today, but they're promising us warm — even hot — sunny days for a while starting tomorrow. Oui, demain — toujours demain. We'll be making a batch of dolmas — stuffed grape leaves — this afternoon. I picked and blanched 50 grapevine leaves yesterday afternoon.
Posted by Ken Broadhurst at 07:37